You are here: HomenextPlacesnextDerbyshirenextDerby: The Methodist Church in Derby

Derby: The Methodist Church in Derby

Description by the Rev John Bradbury at the point of Methodist Union, taken from the Handbook of the 112th Annual Primitive Methodist Conference held in Derby in 1930 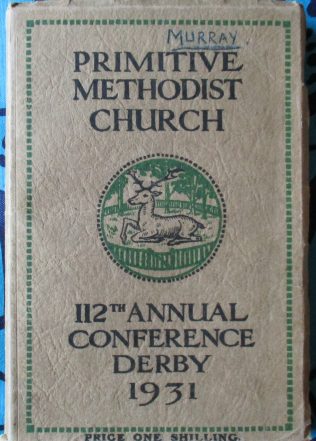 On the evening of August 16th 1762, John Wesley came to Derby.  He did not intend to preach but to visit a Mr and Mrs Dobinson, who recently had left London to settle in Derby.  They sympathised with the new evangelistic movement. There was a Divinity shaping his ends!  The people, hearing of Wesley’s visit, crowded the house.  He could not hold his peace.  “I spoke to them half-an-hour …. and then spent some time in prayer.”  That night God created the Methodist church in our town.  Within two years the first Methodist church in Derbyshire was built.

This historic sanctuary still stands in St Michael’s Lane, near the Conference Church.  It is now used as an organ builder’s workshop.  Many mighty men and movements are associated with it.  There John and Charles Wesley preached several times, as also did “Fletcher of Madely”, Jabez Bunting and other Methodist heroes.

Among the first to join the new society was George Cooper who became Derby’s first Methodist local preacher.  His great grandson, Rev Robert Lamplough, who in 1887 became President of the South African Conference, studied under a Derby mathematician, whose wife was a member of Mrs Lamplough’s society class. One of the sons of this tutor and his worthy spouse, is known throughout the world as the eminent English philosopher, Herbert Spencer.

As the cause grew, St Michael’s Lane Church became too small.  There Derby’s first Sunday School was commenced, only five years after Robert Raike’s famous experiment in Gloucester.  In 1805 a more spacious sanctuary was built in King Street, seating 800 people.  So great was the advance of the cause that in    1841 this Church was pulled down and the present noble structure erected.  This “Mother Church of Derby Methodism” is 90 feet long, 64 feet wide and seats 1,400 people.  It’s portico is of the Doric order and its beautiful mahogany pulpit  and massive organ are amongst the finest in Methodism.  On either side was built a minister’s house.  In the one on the left of the entrance lived the Rev George Macdonald. whose five children became respectively Lady Burne-Jones, Lady Poynter, Mrs Baldwin (the mother of the ex-Prime Minister, Mr Stanley Baldwin), Mrs Kipling (mother of Rudyard Kipling) and the Rev. F.W. Macdonald (a President of the Wesleyan conference, a man of exquisite literary taste and expression).

The birth of the Primitive Methodist Church in Derby is full of interest.  Here is a simple record from the Journal of Hugh Bourne: “After this” (i.e. the opening of Belper in 1814), “the work spread to Derby and its adjacent places.” The Unseen Hand was still leading!  Robert Winfield, a small farmer living in Ambaston, a village seven miles from Derby, in 1814 became definitely identified with the new evangelistic crusade.  He proved himself an expert in opening new places.  Through the ministry of a woman, Mary Taft, one of the most successful women evangelists of her generation, he had found the Christ.  Two future Wesleyan presidents were among her many converts, viz., Thomas Jackson and Joseph Taylor.

Through a woman, God began the Primitive Methodist church in Derby.  In 1815 Winfield invited Sarah Kirkland, the first woman travelling preacher in Methodism, to conduct a lovefeast at Ambaston. At that meeting several were present from Chaddesden, where recently we have opened a new Church, built on land given by a beloved Wesleyan lay preacher, Mr Thomas Coleman,  They besought her to preach in that village on her way home.  In the service were present three nameless Derby residents, who pleaded should preach here the following night.  Sarah Kirkland possessed by the Holy Spirit, came and prayed and preached and conquered.  A Church-members class was formed.  Fifteen months after her visit, Derby became the second circuit of the newly born church.

In 1817 Clowes came to Derby.  From here he went about Derbyshire and Nottinghamshire, beseeching the people to accept Christ as Saviour and founding Churches.  The first Primitive Methodist church erected in Derby was in Albion Street, out of which came out well known Traffic Street church.  The second was an old barn at Normanton, playfully called “the Cathedral”.  That cause is now continued in the flourishing St Thomas Road church.

The United Methodist church in Derby  has a long and honourable story to tell.  The Methodist New Connexion section of it is one of the oldest Nonconformist churches in the town.  Two or three of its ministers became Presidents of Conference.  At least three of its members entered the ministry.  In 1900 the Old Temple Church was sold and in its place in the midst of the people on Dairyhouse Road, a modern structure was built. When in 1849 the Wesleyan Reform movement began, Derby became one of the centres of operation.  Rev. William Griffith, one of the most remarkable Methodist ministers of his day, was publically expelled by the mother church for irregularity.  He settled in Derby and inaugurated a new branch of Methodism.  Becket Street church was built in 1857 and for twenty two years Mr Griffith was its minister.  This Hercules in physical and ethical strength became Derby’s advocate of the Gospel of “liberty, fraternity and equality.”

When the first Methodist church in Derby was opened, the population  was less than 8,000 souls.  It is now 140,000.  The Methodist church has bravely striven  to keep worthy  pace with the town’s growth. The Wesleyan church has a great record.  They occupy many citadels in Derby and adjacent places, with their twenty nine churches and schools.  Over 2,000 adults are church members and a big host of juniors are members in training and Sunday School scholars.  In the spirit of the coming Methodist Union scheme they have joined with the Primitive Methodists in purchasing a fine site at Spondon for a new united church.  Recently they have spent £25,000 in adapting and extending their London Road church premises for larger spiritual campaigning.  They have built the excellent suite of school premises connected with the Conference church at a cost of £10,000.  In two new districts they recently have built two new churches, and are now accepting a tender of £3,700 for new Sunday schools at Litchurch.  Among its members are still some of Derby’s most influential citizens. The Junior M.P. for Derby, Alderman W.R. Raynes is on the Wesleyan local preacher’ plan.  Its present ministers are Revs John Freeman, Benjamin Lowe, James Bradburn,  E.W.Baker MA, R.H.Wills, C.H. Tice, L.J. Maw and A Manley.

In Derby and its immediate district the Primitive Methodists have four circuits, with eighteen churches, and an adult Church membership of fourteen hundred.  They have a strong junior membership in addition.  In the Sunday Schools, Christian Endeavours, Life Brigades and other junior organisations are large numbers.  The opening of the New School and Church at Chaddesden was an inspiring event.  Some noted Connexional leaders have served in Derby.  Dr William Antliff and Dr Samuel Antliff wrote their names indelibly on the town’s church life.  The President of this year’s Conference was the beloved minister of Kedleston Street church and circuit from 1913 to 1918.  The present ministers are Revs. W.S.C. Leach, A.R. Wightman, G. Fairfoot. Charles F. Gill and A.J. Herod.  Four ministers on the “active retired” list live in Derby, viz., Revs. J.C. Wenn, J.P. Mossop, Edgar Ball and John Bradbury.

The United Methodists have five churches with a virile membership of 568.  Revs. Harry Robson and J.H.Parks B.D. minister to a united and devoted people.  Some of the most convinced advocates of Methodist Union are in their ranks.

Derby, as elsewhere. has had ebb-tide in the churches.  But there are signs of a turn of the tide.  The people are realising disillusionment.  They have tried many broad ways and catchy isms  and again they are turning to the churches.  The alive, up to date church of Christ is going to have a fresh chance.  “There is night and day, brother, both sweet things … there’s likewise a wind on the heath.”

In so great a day the three Methodist churches are joining into one.  We come together for more challenging spiritual witness and work.  Will this be the outcome of Methodist Union?  Have we the grace of God enough to make it sure?  If we do not pass beyond the application of domestic economy to Methodist affairs and make the Union the jumping-off ground to prove our evangelistic genius on a greater and grander scale, the union scheme will be a failure.  God is calling the four thousand Derby Methodists and the twelve million Methodists in the world to the urgent tasks: Vitalise! Organise1 Evangelise! Gandhi says the first essential to save India is that all Christians should begin to live as Christ lived.  That is the first essential to save Britain and the world.  If that supreme condition be met by the people called Methodists, what will be the prospects of the New United Church?  As bright as the promises of God!