You are here: HomenextPlacesnextDevonnextExmouth Circuit, Devon 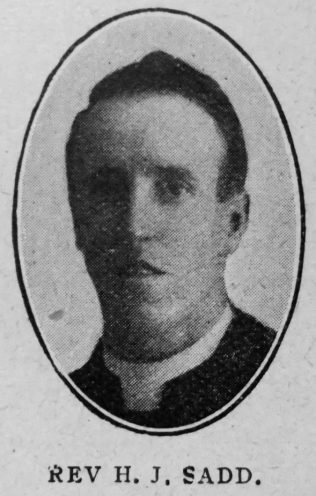 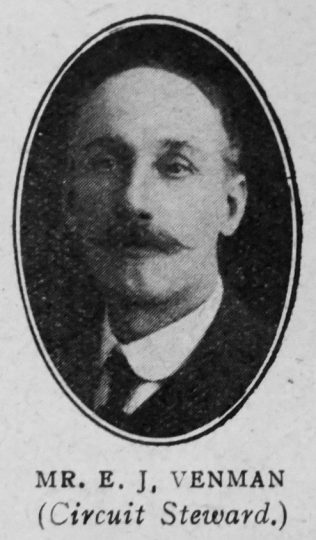 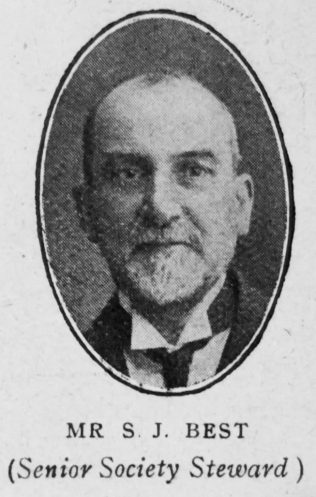 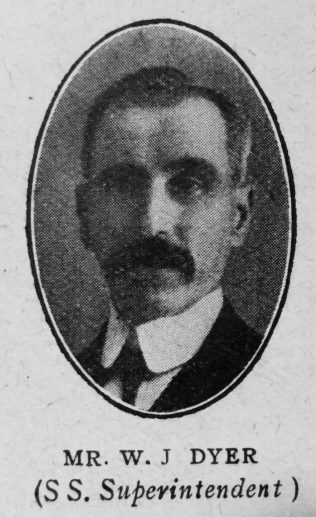 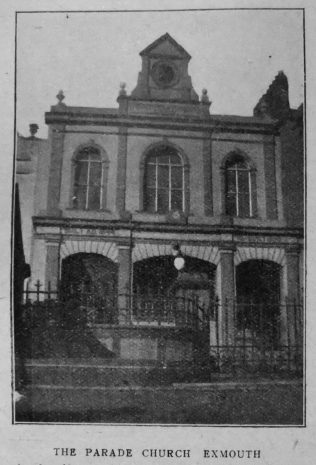 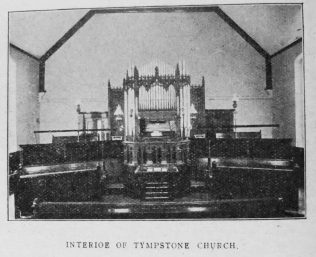 Transcription of Article in the Christian Messenger by Rev. Herbert J. Sadd

During a flying visit to the town several years ago a foreign duchess declared that Exmouth was the prettiest place in England she had seen. Such statement may be open to challenge, though it must be conceded that there is no town in Devonshire of equal size that possesses so many and such delightful beauty spots. Its claim to be regarded as a seaside and holiday resort is now firmly established, but a glance at the map will reveal the fact that it is washed more by the waters of the Exe than by the waves of the English Channel. Nevertheless, thousands of holiday makers every year revel in its long sweep of beach, its shady walks under the cliffs, and its breezy heights, from which a fine stretch of sea-girt coast town can be surveyed. In addition to its beauty, the surrounding district has historical associations which carry the mind back into the shadowy past. Hayes Barton, within easy reach, is the house where Sir Walter Raleigh was born. Half a mile from Lympstone is Nutwell Court, the ancient home of the Drake family, where many relics of Britain‘s naval exploits are preserved. In Littleham Church there is a mural tablet to the memory of Lady Nelson, the widow of the Admiral of Trafalgar fame, while in Woodbury Church can be seen a quaint fifteenth century epitaph on an old slab in the floor –
“ Hee first diceased her, For a while shee tryed
To live without him—Didn’t like it, dyed.”

Primitive Methodism owes its introduction into Exmouth to the late Rev. Thomas Drew in 1853. The two societies forming the present Circuit are all that now remain of what once was known as the Exeter Mlsslon. The causes that led to the other societies ceasing to exist are hidden by the clouds of obscurity. But it is certainly strange that in Exeter, a city so strong in Methodism as represented by the sister denominations, there should be no church of our persuasion. Lack of enterprise at the beginning may account for a good deal. Even to-day, were it not for the danger of the overlapping accusation, it would be possible to form the nucleus of a very respectable society from the Primitive Methodists resident in the city.

Fore Street was the scene of the first open-air service in Exmouth. A chair borrowed from a friendly house was the article of household furniture upon which Mr. Drew stood while, with characteristic fervour, he proclaimed that Gospel that meets the needs of every age. One of our present members, Mr. R.A. Spear, can recall seeing a virago issue forth from her house brandishing a poker and threatening the while to belabour the preacher with the same unless he held his peace. Needless to add this forceful form of persuasion did not have the effect desired. A curious entry culled from the Circuit Account Book of a few years later informs us “ That in consequence of Brother __ having been prevented from getting out among the members during the past quarter, through personal affliction, his meat bill is more than the amount stated to be allowed last quarter.” A clear case of rationing, even though ration books were unknown.

After an apprenticeship in the open-air the first preaching room was opened in York House, Manchester Street. This same house is still occupied by one of our members, though there is no family connection with the occupiers of those early days. The next move was into a carpenter’s shop in Albion Place. The only approach to this room was up a difficult step-ladder, and the expansive dresses worn by the ladies of that period were often not a means of grace in their ascent to this place of worship. A notable forward movement was made when the premises known as the Parade Church were acquired from the Wesleyans in 1859 on the latter taking over a new sanctuary.

Nothing further of note is recorded until 1890, when, the ministry of the late Rev. George Titten, this building was rebuilt, improved and enlarged to seat 350 worshippers. One can see where still further improvements might be expected, and these may be carried out when the opportunity is favourable.

The membership of our Exmouth society stands at one hundred and two. The Sunday services are well attended, characterised by genuine heartiness, and, except during the summer months, when united open-air services are held on the promenade, the evening service is closed by a finely sustained prayer meeting. As recently as 1916 a new organ was opened free of debt, and this, with the help of a capable choir, enhances considerably the service of praise. Under the general superintendency of Mr. W.J. Dyer, the Sunday School of over two hundred scholars is very favourably staffed and graded into primary, junior, and intermediate. It cannot be said that the week-evening gatherings are as vigorous as one would desire, but they supply the felt need of those who consistently attend. Probably the lure of outside attraction is largely responsible for the difficulty realised in organising mid-week efforts, an experience shared alike by all the Free Churches in the town. One pleasing feature, however, is that, generally speaking, the main of our leading officials are as regularly in their place for the Wednesday evening service as for the services of the Sabbath. One rarely misses on these occasions the genial presence of our honoured senior Society Steward, Mr. S.J. Best. The prayer meeting on Monday, the service of Wednesday, and the class meeting on Thursday are all blessed by his unassuming help. We would that the same might be said of Society Stewards in every Circuit!

Our other society is found at Lympstone, a picturesque riverside village about two miles north of Exmouth, with one long, straggling street leading down to the waterside. Here we have a beautiful sanctuary seating 200, with a membership of 53. The organ, a sweet-toned instrument opened in 1909, is skilfully played by Mrs. W. Sherwill, the daughter of our esteemed Society Steward and choir master, Mr. J. Mortimer. For several years services were held in a chapel vacated by the Unitarians. Then in 1875 the building now used as a school was erected and times of great blessing were experienced. It is no uncommon thing to hear mentioned after this lapse of time the names of Revs. Thomas Humphris and William Lawrence in connection with the strenuous days of that earlier period. So greatly did the cause prosper that in 1884 the present church was opened, the late  Mr. Venman, father of our junior Circuit Steward, undertaking the work of erection at cost price. For many years this building will stand as a monument to the memory of one who by his Christly unselfishness endeared himself to all. Among those who in the formative years did fine work for the society, mention should he made of the late Miss Fley and Miss F. Sellers. The latter is still living, though ageing rapidly, and she yet maintains an unflagging interest in the prosperity of the church, which is as precious to her as a child. Among recent workers none have rendered more devoted service than the late Mrs. J. Mortimer, who passed to her reward in August, 1918. Her passing was a staggering blow to the society, of which she was Steward. No good work initiated to promote the well being of the church and community ever lacked her whole-hearted support. As a daughter of the late Mr. Venman she worthily upheld the family tradition, and many rise up to call her blessed.

By their high spiritual tone the Sunday services are a blessing to all who attend, while the beautiful, soulful singing is a benediction in itself. One would rarely find anywhere a service more reverential in character. As at Exmouth, the week-evening meetings are not largely attended, with the exception of the weekly meetings of the Junior Christian Endeavour society. This meeting, held on Monday evening, is conducted by Mr. and Mrs. G. Loman, and is attended by upwards of fifty children, who enter most heartily into every item of the arranged programme. The Sunday School is efficiently managed and orderly in conduct, Mr. F.G. Venman being superintendent.

This village society has had the honour of giving to our Church two ministers – Revs. G.T.D. Pidsley and J.W. Haywood. Quite recently the former paid a visit to his native place and delighted his friends by preaching on two occasions with great acceptance.

The Circuit is blessed with good and able officials. Our Circuit Stewards, Messrs. F. Kelly and E.J. Venman, are ever alert to promote any movement which promises prosperity for our churches and enlargement for the Master’s Kingdom. During the ministry of the present writer a new manse, in one of the best parts the town, has been secured, and only a very small debt now remains to be cleared.

Missionary interest increases year by year. The children of our Sunday Schools are very proficient in the proper use of a missionary card, and each Endeavour Society has its box which never fails to put in an appearance when the cause of missions is before the weekly meeting. Some few years ago Mrs. A. Jones initiated branches of the Women’s Missionary Federation, and to-day these are faithfully performing that duty for which they were called into being.

Among the ministers who have laboured in the Circuit during the lifetime of most of our members are Revs. J.E. Sunderland, B. Beckerlegge, I. Brentnall, A. Warcup, J.W. Everingham, A. Jones, and the late J.T. Morris.