You are here: HomenextPlacesnextEssexnextColchester, Essex 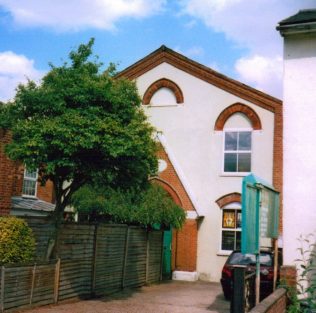 I sometimes think I might have been in darkness and despair until now had it not been for the goodness of God in sending a snowstorm, one Sunday morning, while I was going to a certain place of worship. When I could go no further, I turned down a side street, and came to a little Primitive Methodist Chapel. In that chapel there may have been a dozen or fifteen people. I had heard of the Primitive Methodists, how they sang so loudly that they made people’s heads ache; but that did not matter to me. I wanted to know how I might be saved, and if they could tell me that, I did not care how much they made my head ache. The minister did not come that morning; he was snowed up, I suppose. At last, a very thin-looking man, a shoemaker, or tailor, or something of that sort, went up into the pulpit to preach. The text was, “Look unto Me, and be ye saved, all the ends of the earth.” He did not even pronounce the words rightly, but that did not matter. There was, I thought, a glimpse of hope for me in that text. The preacher began thus…

Then he looked at me under the gallery, and I dare say, with so few present, he knew me to be a stranger. Just fixing his eyes on me, as if he knew all my heart, he said, “Young man, you look very miserable, and you always will be miserable – miserable in life, and miserable in death – if you don’t obey my text; but if you now obey, this moment, you will be saved.” Then, lifting up his hands, he shouted, as only a Primitive Methodist could do, “Young man, look to Jesus Christ. Look! Look! Look!” You have nothin’ to do but to look and live.” I saw at once the way of salvation.

The chapel was built in 1839 and remodelled in 1892 and is now called Spurgeon Memorial Evangelical Church. Spurgeon became one of the 19th century’s most loved preachers, preaching to thousands, opening a ministers’ training college, and an orphanage, starting a Christian magazine, and writing books still well-loved today.