You are here: HomenextPlacesnextEssexnextGrays Circuit, Essex 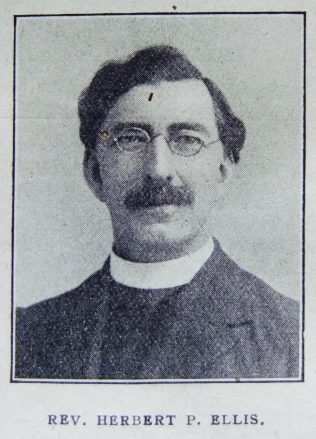 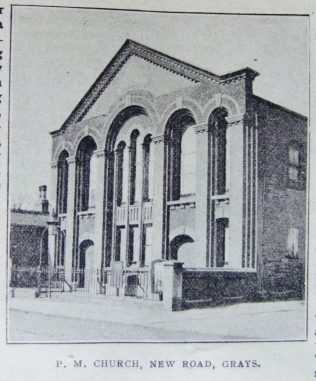 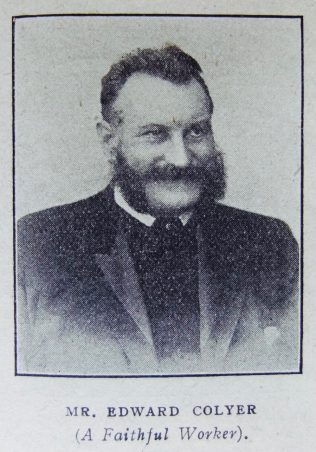 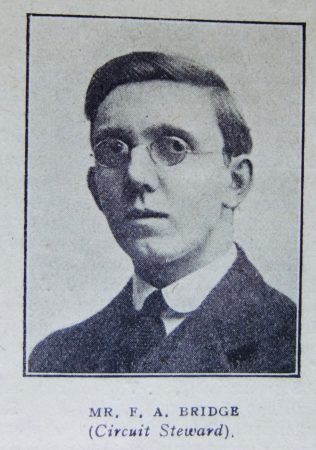 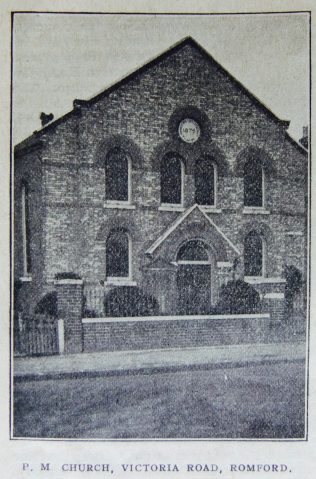 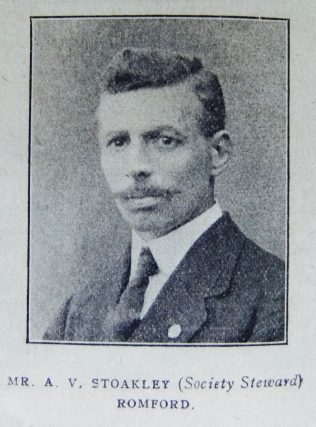 Transcription of Article in the Christian Messenger by Rev. Herbert P. Ellis

It is impossible to say how early in the 19th century the pioneers of Primitive Methodism missioned Essex, but about seventy-five or eighty years ago it had so, established itself in the South Eastern part of the county, that the village of Aveley was the head of a Mission with Societies at Orsett, Upminster, and at Ockendon. The Superintendent lived at Aveley, and the chief church of the mission consisted of the minister’s parlour.

Ministers like Revs. Proctor, Bolton, Whittook and Knox, kindled a fire of fervent evangelism in those days, which still burns in our circuit to-day.

Grays is a town situated by the Thames, and about midway between London and Southend, and is a growing industrial centre. The clay industry and Tilbury Docks very near, find employment for several hundreds of its increasing inhabitants.

The history of our church is very varied, but is one of great success. About 1850, services were held regularly at the house of Mr. Thos. Hills, who lived in a small cottage in the London Road. Soon afterwards there migrated into Grays a Mr. and Mrs. Snell, who a few years previously were attracted to the “Ranter Services” at Orsett, and were converted. Owing, however, to severe persecution, they were compelled to leave their native village, and at last settled at Grays. Their house in Argent Street was next to a public-house called the “Castle.” Here they began religious services, and being more in the centre of the town, Mr. and Mrs. Hills closed their services and joined them. It was here, in 1851, our first society was formed, consisting of four members only, Mr. and Mrs. Snell and Mr. and Mrs. Hills. This little society a little later moved to Bond Street, and the wonders of saving grace manifested there are remembered by some living among us to-day. The Bible then used is in the hands of our oldest member who cherishes the precious heirloom of these early exploits for God. In 1869, Rev. Thos. Owen was sent to Aveley as super, and he soon kindled in the hearts of the Bond Street Society a desire for a well-built chapel. Though few, and very poor, they had that mighty quality of Faith in God, which “laughs at impossibilities,” and the desire grew into a decision.

So in 1870, the foundation stones of our present fine chapel were laid. The Aveley Society was transferred to the historic Gravesend Circuit, under the superintendency of the the sainted John Holdroyd, and Rev. Thos. Owen came to Grays as second minister. Under the able and successful ministries of such heroic and spiritual leaders like Revs. Joseph Peck, John Davidson, Henry Carden, John Hemshall, W. Dunham and William Jones, the Grays Church grew in numbers, spiritual life, and religious power in the town.

Connected with our Grays Church are such families as the Redingtons, Twins, Baines, Jepsons, Harveys, Hills, Bridges, &c., who have, and are still rendering splendid service.

There is still with us one noble soul who has a romantic and unique history. She was Miss Sarah Dempster when first converted, and when she became a member. At the age of thirty she became Mrs. Snell, at fifty-four she became Mrs. Harvey, at the age of sixty-seven she became Mrs. Gunton, and now at the ripe age of ninety-six she is still a member and awaiting another name – a “New Name,” when her Lord shall call her or come for her. She is spending her happy eventide in comparative good health, able to read the “grand old Book” first used in our first Mission House even without her “specks.” She lives near the “old Ranters’ Meeting House,” in Bond Street, and is full of stories about the “grand old times.” Our church is staffed by a band of young, energetic, enterprising officials, the Society Steward,  William Goodwin, being thirty, and our able, intelligent, enthusiastic Circuit Steward, Frank Bridge, only thirty-one. He is, I think, one of the youngest stewards in any of our circuits. We have just celebrated our jubilee, and had visits from the sainted and aged Dr. F. B. Meyer, and our versatile and eloquent Ex -President, Rev. S. Horton, also other able ministers. These were “times of refreshing from the presence of the Lord,” and the tides of spiritual power rose very high. With these celebrations were connected great schemes of a structural and renovating nature, involving an outlay of several hundred pounds. Some of this money has been raised already, and also some of the improvements made.

Now the church is ready for a good intensive Revival and Extensive Evangelistic Campaign. The minister is seeking to get the people interested in, and enthusiastic about, the “Personal Evangelism Campaign,” and believes that in another year the membership can be doubled, as well as the church quickened. The church has witnessed gracious seasons of revival in past years. It was known as the “warmest church” in the town, and scarcely a Sunday passed without conversions. The old members speak of these “grand old times,” and long for the same spiritual power and soul saving results. Given the same prayerfulness, the same strong faith and impassioned gospel ministry, with wise methods, the “Glory of God “ will come back again.

ROMFORD.- Our Romford Church is situated in Victoria Road, and has one of the best positions in the town. Clean, both inside and out, it is in every way adapted for a great aggressive evangelistic movement. It is in the midst of a very thickly populated – middle-class district, with no other religious organisation near. Rev. Joseph Odell, that prince of evangelists, who in the midst of gracious work at Gravesend, found even time and strength to mission fresh places, came over with Mr. J.E. Colyer and conducted services in the streets of Romford. Converts as usual were witnessed, and soon a room was secured and “a church formed.” The present church was built in I869, and a great work has been done. Among those who have, and are still rendering splendid service, is Mr. J.  Colyer, who has been Society and Circuit Steward, also Mr. Sapsford. These are the only two surviving members of the “old paint shop room,” where the first services were held. The present Steward is Mr. A.V. Stoakley, who is also assistant Circuit Steward and School Superintendent, &c. He is one of the most capable and energetic officials any church can boast of. There is a large number of young people attached to the school and church.

Recently God has been working very graciously, and several conversions have been witnessed, and new members added. Romford suffers from distance from the Circuit Minister’s home, and needs more particular ministerial oversight and work. Not many churches present greater possibilities for spiritual and evangelical enterprise than Romford, if she had the necessary ministerial attention.

CHADWELL ST. MARY.- Services were first held at Biggin, a hamlet adjoining Chadwell. In 1895, the little wooden chapel now standing in Sandy Lane, was erected. Mr. Bridge, the father of our present Circuit Steward, preached the first sermons there, and ten souls were converted the first night. This is not surprising, for Mr. Bridge was ever evangelistic in his preaching, and was always praying and believing for conversions. His son although eight years old at the time, vividly remembers that “glorious opening day.” Many more conversions have followed since, and much good work done in the village. Miss Porter, now of our Grays Church and a Local Preacher, rendered splendid service there with Mr.  H. Haines. The present Steward is Mr. Martin, who, with his family, are doing magnificent work, and keeping the few members and school together. During the last few years several members have removed to other parts, and the young people come into town for services. Still there is much hope for our cause there, if a new and large building could be erected in another position where many new houses are being built.

WARLEY.- This is a small Mission School and Church Building. Originally attached to the Chelmsford Mission, and transferred to this circuit in 1918, it was built in 1916. It has done much good, especially among young people. It has a large school under the capable superintendency of Mr. W.F. Lowe, who also is our able organist and local preacher. His esteemed father, Mr. M. Low, has put much time, effort, and prayer into the mission, and is one of the most respected men in Warley and Brentwood. Miss. J.M. Perritt, the well-known Connexional evangelist, has now Pastoral charge of the work and is rendering very effective service, particularly among the women of the district. She has established a “Women’s Own,” and this has not only brought several to the church services on Sundays, but has been the means of winning some to Christ. The circuit is small, having only these four places, but is very wide, and Warley being sixteen miles from the Superintendent’s home, and Romford twelve, a rearrangement of places would greatly add to the success of each church which may come about when or before Methodist Union is accomplished.

Since 1862, some forty-seven ministers have laboured on this circuit, and this number has included some of the ablest, most saintly, and successful men Primitive Methodism ever had. There was Joseph Odell, the intellectual, impassioned evangelist, with his unequalled pulpit and platform power over the minds and hearts of his hearers, John Davidson, saintly and sweet, with great qualities of mind and heart, William Jones, “the silver-tongued orator,” Richard Blair, the wise and capable administrator and financier. Revs. J. Odell and W. Jones became honoured as Presidents of Conference. Rev. G. Crickmay had the longest term of ministry, staying seven years.