A snapshot of Village Methodism 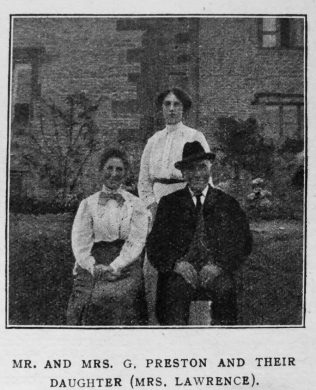 Transcription of an Article in the Christian messenger by Rev. R.W. Burnett

In a Gloucestershire village on the Cirencester Circuit, there dwells a good brother who is three-fourths a Primitive Methodist, though his name stands among the local preachers on the Cheltenham Circuit Plan of the Wesleyan Methodist Church.

Brother George Preston shows ever in the sunshine of his face, the wisdom of the aged disciple, the joy of the Kingdom of God.

From his own lips, and at his own fireside, one icy winter’s night, I heard this story of “Withington.”

It is a remote place in the very centre of the Cotswolds. It has a station on the line that links up the Midland and South Western systems. This line has not been laid very many years, and before its existence Withington was isolated indeed.

Methodism, however, had penetrated to this valley, and there was a village chapel.

One day, the superintendent from Cheltenham sat by the side of an aged dying man, and in as simple a way as possible, made known to him what my friend called “The plan of Salvation.”

His daughter, a woman of sixty, sat listening. “Well,” she said to herself, “if its like that, then I’ll be a better woman.” She might have said, “ I’ll be a believer, I am a believer,” but speech about religion was new to her, and her mind had a practical bent. What she said was just “I’ll be better woman,” and from that moment Christ had another disciple, and the Methodist chapel another worshipper.

The leaven, too, began to work in that ignorant, rough, semi-civilised home, for, said my friend, “they were rough and no mistake,” but the domestic transformation is another story.

One Sunday my friend preached at Withington, and after service, Mrs. Morgan said: “George! It does seem a pity that there‘s the harmonium, and no one to play it. It would be so nice to have the music. Do you think I could learn to play some tunes?”

“Well,” said my astonished friend, “you can try.” And, try she did. Someone provided the “irreducible minimum” of information – what the lines and spaces stood for, where “middle C” was to be found, etc. – and when our local preacher came again, she was ready with four tunes that her stiff toil-roughened fingers had laboriously practised. The hymn was announced, the music began, and continued for the length of two lines (not without blemishes) and then there was a breakdown.

A second attempt, however, was made, at the second verse, and the other hymns were played through without disaster. After the service, preacher and organist exchanged experiences. “I did feel bad over it,” said my friend. “The perspiration rolled down my face.”

A beginning having been made, skill came through practice, and the services never lacked music.

Then one Sunday the question was put: “George! The children of this village have nothing to do and nowhere to go on Sunday mornings: do you think I could start a little Sunday School for them?”

And my friend said as before: “ ‘Well, you can try.” New Testaments and Hymn Books were soon forthcoming, and with half-a-dozen of the neighbours’ children, a beginning was made.

Soon there were a dozen, then twenty, thirty, and at length thirty-eight names were on the roll.

Then my friend, in his story, drew a picture of the School Treat at Withington, with Mrs. Morgan reigning supreme, and Thomas, her husband, handing round the cake.

So, Methodism revived in Withington, and all because, one elderly woman, herself but newly entered into the Kingdom, “tried.”

My friend attends pretty regularly his Circuit Quarterly Meeting, and when he moves from the tea-table to be off to Lansdowne Station, the superintendent says coaxingly : “Brother Preston! Don’t go away before you have given me some dates for the New Plan.”

And my friends replies: “Well, I’ve promised to go to Windrush on the Witney Circuit for a Sunday, and Mr. Burnett wants me for ever so many Camp Meetings next quarter, but put me down for a Sunday at Withington, and let me know the date.”