You are here: HomenextPlacesnextHampshirenextBinley, Hampshire

the worth of a Christian home 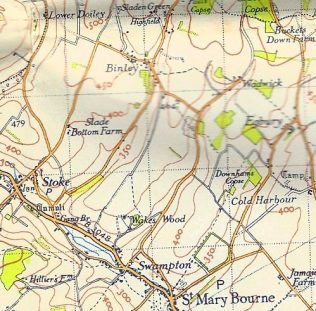 As far as I know, no denomination has ever had a chapel at Binley, and my 1930s Ordnance Survey map shows neither church nor chapel.

Thomas Russell preached the Gospel there in May 1831, in response to several weeks of invitations to preach in a number of places in Hampshire, and found that no other religious meetings of any kind were held in the village at that time.

He wrote, “Miss Farr got awakened and converted. Her parents too joined the society, and afterwards scores were converted in their house… And that has been a home for the preachers ever since.”

No less than two hundred persons are stated to have been converted in that farm-kitchen. Miss Farr, who had strong mental powers and had received a superior eduction, became a local preacher, and in 1837 married George Price, one of the makers of the Brinkworth District.

It is unlikely that any of us will have the privilege of seeing scores or hundreds come to faith in our homes, but we can all ask God to use our dwellings as places of hospitality, welcome, kindness and counsel, where people find the way to a settled peace with God through trust in our Lord Jesus Christ.