You are here: HomenextPlacesnextHampshirenextFaccombe, Hampshire 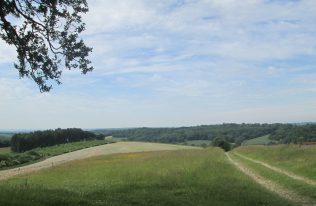 Thomas Russell reports in The Life and Labours of Elizabeth Russell (page 196) that Elizabeth Smith began her ministry on the Berkshire mission on 18th April 1830, and that “the Lord greatly owned her labours, and many were awakened and brought to God.” The term “awakened” describes someone who is aware of the truth, power and call of the Gospel, but who has not reached the repentance and faith which constitute conversion.

In 1830 (Primitive Methodist Magazine 1837, page 217) her “enterprising mind contemplated a field of missionary labours in Hampshire.” In the autumn of 1830 she moved east into Hampshire, down the valley of the Bourne, and established a society first at Faccombe. Thomas Russell places her preaching in Hampshire between his entries dated 22nd August 1830 and January 1831.

It would thus seem that Faccombe was the first place in north Hampshire to have a Primitive Methodist society, though sadly the chapel they later built has now been demolished; its location is still shown on old Ordnance Survey maps.

I do not know exactly which route she took from Berkshire to Faccombe, but the photograph, taken in June 2015, shows a track which leads from East Woodhay to Faccombe, and must be one of the routes the early pioneers took, as there was already a work in East Woodhay as well by 1831 as Thomas Russell records in his Record of Events in Primitive Methodism.