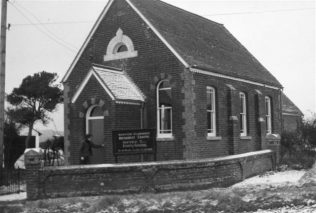 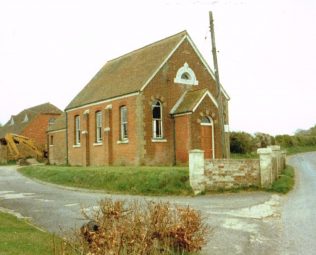 This chapel was built in 1870. Prior to 1870 the Primitive Methodist meetings had been held in the old Pit Hall and in a cottage in the main street. They received much help from an evangelist by the name of Isaac Nullis. People from Ibworth and Upper Wootton also attended meetings. The new chapel, being situated between Upper and Lower Wootton, was fairly close to Newfound, and in 1869 the societies of Newfound and Wootton were amalgamated. However, Wootton St Lawrence was not conveniently situated for the Silchester Circuit, and in 1915 the cause was transferred to the Basingstoke Circuit.

Isaac Septimus Nullis was active in Hampshire at times in the period 1855-1866. He was born at Ashampstead in Berkshire on 9th October 1828. There was a revival through then instrumentality of the Primitive Methodists at Quick’s Green in the parish of Ashampstead in 1849, and in the surrounding area. Nullis attended services, and came into the assurance of salvation at the end of March 1850 after a prayer meeting at Ann Street’s home in Quick’s Green. He sensed an immediate desire for the conversion of others, and by 1853 desired to become a minister.

In February 1855 he was very active in revival services in Silchester, at which about twenty people professed faith. On Sunday 27th May he attended a camp meeting at Baughurst, “when five souls were brought to the Saviour”. The following day he went to a camp meeting at Silchester, and six persons professed faith. At one meeting about two hundred people were present. This was followed by a powerful prayer meeting, at which some 15 or 20 people came to faith.

In August 1855 he went to Silchester and took services at Silchester, “Tudley” (presumablyTadley), Charter Alley, with a work of conversion at each place.

He returned to the area in September 1864 and held revival services at Silchester, Charter Alley, Pit Hall and Wootton. Again he saw people come to faith in Christ, “and one or two received the deeper baptism.” He recorded:

At Chatter Alley [sic] on the Sunday there were several penitents, among whom was a woman of profligate habits and disreputable character. At the Baughurst missionary meeting two were saved, one of them nearly seventy years of age. Last Sabbath evening eight or nine were crying for mercy. On Thursday night I attempted to close the meeting, three or four times, but failed to do so, till one in the morning; seven found peace, one of them a man nearly seventy-five years of age.

In 1866 he was back in the area, taking meetings in places which included Charter Alley, Silchester, Wootton, Hannington, Mortimer.

I preached at Wootton St Lawrence in 1965 and met elderly men – as I also did at Charter Alley and other nearby Primitive Methodist village chapels – whose conversation was deeply significant in setting the course of my entire life. There was a quality about them which made me sense that these man had been with God, and it was their religion that I decided to follow.