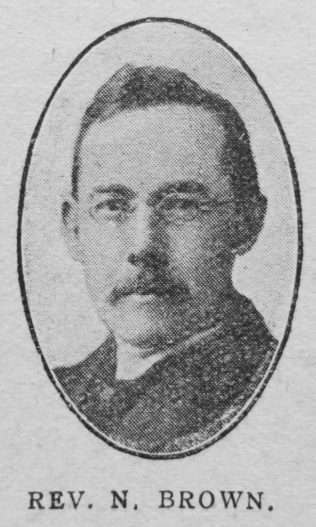 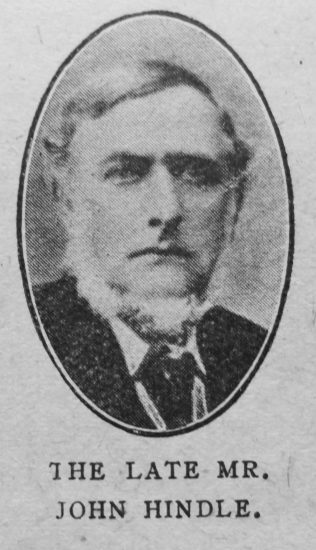 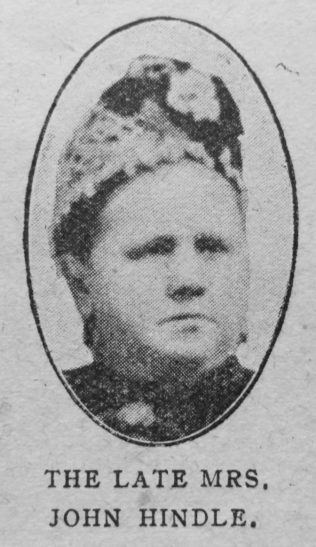 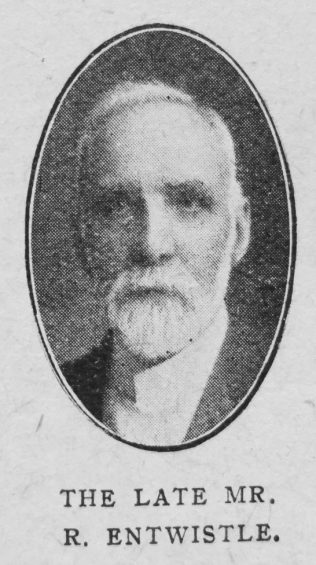 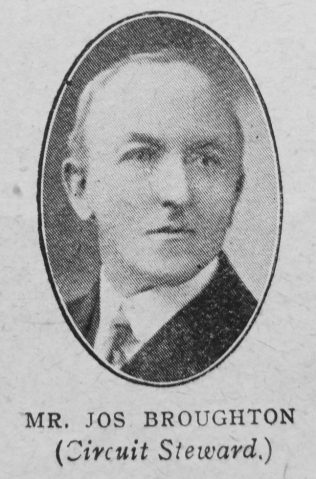 Transcription of Article in the Christian Messenger by Rev. N. Brown

BLACKBURN Primitive Methodism has a fairly long history. The Rev. Thomas Batty, an early and energetic missioner, after visiting the Craven District of Yorkshire, at Skipton and other places, made his way into Lancashire, arriving at Blackburn in December, 1821. Here, as elsewhere, his message was heartily received and his work eminently successful, so much so that, by the end of May, 1822, he had gathered a church of two hundred and thirty members. Two years later there was a Blackburn Circuit, with societies as far afield as Haslingden and Chorley, beside many intermediate places, an area now comprising six circuits. A full history of the intervening years would chronicle many changes and developments, providing food for thought and cause for thankfulness and praise.

It is not, however, the purpose of this article to attempt even a sketch of these larger happenings, but merely to give a few items of information and interest concerning the being, history, and prospects, of what is now known as the Blackburn Second Circuit. Truly our fathers “toiled terribly ” to build up the Connexion, and the Kingdom of God. They were ever on the look-out for wider opportunities, and ready to follow, even at great sacrifice, what they believed to be God’s beckoning hand. It was this spirit which created this circuit, as so many others.

In the early sixties, a few members belonging to the mother church in Montague Street resided in the Audley district. These, though ardent and active supporters of the many forms of service in their own church, also met week by week in the house of one of their number for prayer and fellowship. Sometimes it would be at the house of Mr. John Hindle, sometimes at that of Mr. Henry Duxbury. Mr. Joseph Cort, who but recently passed away, and a stalwart to the very end, was to the fore as leader in those days. The meetings were fruitful in good, maintaining and stimulating the piety and devotion of those attending, giving them visions of a wider sphere, and proving the beginning of a large and prosperous work.

In March, 1865, these good people, being filled with love for their Master, and zest in His service, being anxious for the spiritual welfare of their fellows, and believing also that the opportune moment had arrived, ventured on renting a building in Oxford Street and establishing a Sunday-school. Henry Robinson was the first Superintendent, and round him quickly gathered a band of earnest workers. It is well to recall their names, for though they were men and women of lowly birth and upbringing, and though they possessed but little of this world’s goods, they are truly worthy of remembrance, being workmen that needed not to be ashamed. This first Teachers’ Roll consisted of Bradley Willacy, Michael Bolton, William Wetherill, George Dunkerley, Robert Wetherill, Thomas Davenport, Mary Lang, Sarah Wetherill, Alice Robinson, William Mulby, Richard Holden, Catherine Holden, Margaret Ann Hindle, Catherine Fielden, James Heys, Robert Butler, Thomas Charnock, Alice Lang, Ellen Lang, Alice Pickering and Ann Lang. Of these, only one, Richard Holden, now survives.

Naturally, other forms of service quickly followed, and soon the rented building became the centre of a living and growing ministry. Very early the Methodist passion for out-door work manifested itself, for within a fortnight of the opening, a minute is recorded “that we take a walk up Oxford Street and down Lower Audley Street and sing at proper places.” This out-door propaganda was industriously and systematically pursued, with many tokens of usefulness and help. These early pioneers were also zealous in the Temperance cause, establishing a flourishing Band of Hope, which has continued until now.

Success was the reward of faith and zeal and unstinted endeavour, and the rented building soon became too small. Consequently, a site in Oxford Street was secured, and a School-Chapel was erected, being opened in August, 1867. In less than three years it was free from debt, and so crowded that other and larger premises were needed. It was thus that the present chapel came to be built. This is a substantial, comfortable, and beautiful structure, providing accommodation for six hundred and fifty persons. The foundation-stone was laid on September 13th, 1873, by the late Mrs. John Hindle, who, with her husband, rendered generous service and help, A splendid organ was added in 1878, and in 1880 the Infant School was built, thus completing the block of premises as at present.

Among the workers who have passed away, beside those already mentioned, there are names and characters still well remembered and highly revered. Such are Mr. and Mrs. James Ashton, Mr. and Mrs. Edward Swindlehurst, Mr. Ralph Entwistle, Mr. C.W. Whalley, Mr. J. Thornley, Mr. Jeremiah Ashton, Margaret Lightbown, and Mr. and Mrs. W. Anderton. These, with others, “served their generation by the will of God,” aye, and served later generations, too, inasmuch as what they did, made possible the things more recently accomplished. There yet remains one with us of this older generation, who, though now aged and enfeebled, and quite unable to share in our work or worship, remains devoted in spirit. This is Mr. William Pilkington. For long years he sang in the choir, and served as trustee and in any capacity for which his brethren thought him fitted, counting it a privilege and joy to help forward the work, and nothing so pleases him now, as to hear that “Audley” is marching on.

Of those still serving, mention may be made of Mr. Joseph Broughton, the present Circuit Steward, Trust Secretary, and Superintendent of the Primary Department Reared and trained amongst us, for years he, with his wife, have been in the very forefront of efficient and faithful helpers. His love for Oxford Street is immeasurable. His efforts in her interests are unceasing, untiring, and unbounded. Mr. Luke Starr, too, is one of our own, having from childhood an association with us. He serves, with diligence and devoted delight, as Local Preacher, Class-leader, and Senior School Superintendent. These, with others, such as Mr. and Mrs. James Bailey, Mr. and Mrs. H. Walker, Mr. and Mrs. H. Greensmith (Mrs. Greensmith, by the way, being a daughter of H. Duxbury, one of the founders), Mr. and Mrs. J. Bass, Mr. and Mrs. J. Parkinson, Mr. and Mrs. H. Starr, and still others, whose names cannot be given for lack of space, are seeking to sustain and increase the church’s influence. The war has hit us hard, taking from us quite a band of young men who were filling useful and official places, and giving every promise of still greater things. May those spared, soon return, and so make possible even better days than have yet been seen.

An interesting story may here be told as illustrating the helpful and solid character of the work done. The late J.A. Watson, J.P., a beloved Elder and School Superintendent in Blackburn Presbyterian Church, and an active worker in the local Sunday-school Union, and moreover, an interested sympathiser with Oxford Street, delighted to tell how, on one occasion he visited the school, and was asked by the then Superintendent to speak to a boy who had proved troublesome. He undertook to do so and found the lad was named Watson. So, gently reproving him, he added that “it would never do for a Watson to give trouble.” Some years later, again visiting the school, and giving an address, he told this story, and asked if the boy was still in the school. Great was his surprise and joy to find the same boy, now a young man and a school official, occupying a seat on the platform with himself. He made reply that the Oxford Street Primitive Methodists evidently knew how to make troublesome boys into useful men. ‘Tis good to add that this lad, now matured, and having grown-up children of his own, is still a member and worker with us, at Hawthorne Street, as are his good wife and all the members of his family.

In 1878, the Blackburn Circuit was divided, Oxford Street, Great Harwood. Clayton-le Moors, and Rishton comprising the new circuit, with Oxford Street as its head.

Then, in 1888, during the ministry of the Rev. J.S. White, a new cause was commenced in the Whalley New Road district, a growing part of the town. Here, in Hawthorne Street stands a commodious School-Chapel, and a good Sunday-school and congregation have been gathered. In this younger church, too, there are a number of earnest workers, such as Mr. and Mrs. Dewhurst, Mr. R. Holden, Mr. and Mrs. G. Moon, Mr. and Mrs. Watson, Mr. and Mrs. A. Aughton, with their respective families. These, with others, are laying themselves out to make Primitive Methodism an honoured and influential name in this newer and thriving neighbourhood. Though, here too, we have our wartime trials. Our Sunday-school staff especially, has been sadly depleted, and indeed all departments are feeling acutely the absence of those on active service. Truly we desire and pray that soon more normal conditions may prevail, and so enable us to make all things move with energy and hope.

In 1893, another division was made, Oxford Street and Hawthorne Street remaining as the Blackburn II. Circuit, while Clayton le-Moor, Great Harwood, and Rishton, were constituted Blackburn III. So since 1893, these two Societies have borne the responsibilities of a circuit, and sought to discharge their obligations in an honourable fashion. At the present time, the Circuit Statistics are as follows: Members, one-hundred-and-seventy-three: scholars and teachers, eight-hundred and ninety; Property, comprising one church, one school-church, one manse, and land for new church, valued at £9,000, and having a debt of only £250. These figures speak for themselves, and tell of earnest toil and generous support. Both churches are situated in the midst of large populations, where such a ministry as they can exercise is urgently needed. Having in mind the future as well as the present, Hawthorne Street possesses the most promising and appealing outlook. The neighbourhood there is the newer, and large building developments are imminent. It is much to be desired that a church proper should be built at no very distant date, and so make possible forms of ministry and measures of success now out of the question. Land for this purpose adjoins the school-church, and those on the spot are alive to their growing opportunity, and anxious to make the most of it. May fortune smile upon them, and their highest hopes be realised!

In conclusion it may be added that the circuit, during its whole existence, has been fortunate and happy in its ministers. In the days when what is now the III. Circuit was included, the following ministers rendered efficient and acceptable service. Revs. Geo. Morris, William Brass, William Wilkinson, Thos. Dickinson, John Sadler, J.H. Wheldon, C. Finch, P. McPhail, J.S. White, J.T. Barkby, W. Spedding, J. Vaughan and John Gillender.

The present minister (Rev. N. Brown), after seven energetic years, during which he has had joy of seeing the debts reduced by £2,100, removes at the Conference of 1919, and is succeeded by Rev. W. Scott Bosence.

It is a pleasure to write about the friends who made this circuit and many who are doing it service.