You are here: HomenextPlacesnextLancashirenextHeywood Circuit, Lancashire 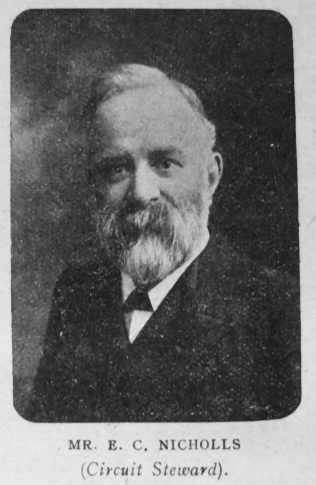 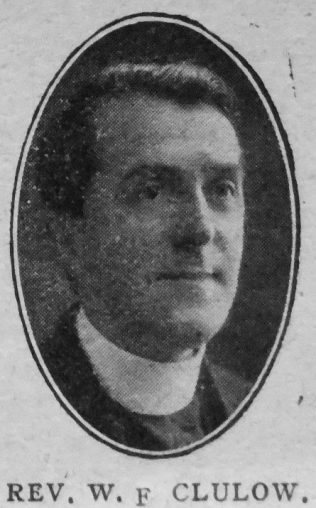 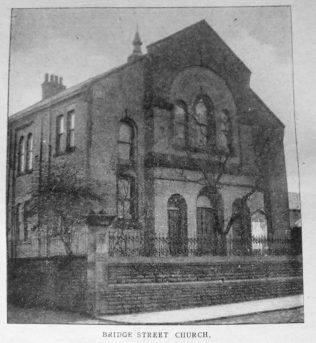 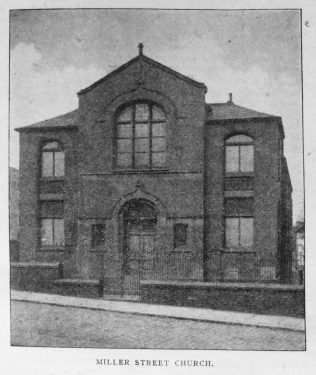 Transcription of Article in the Christian Messenger by Rev. W. Francis Clulow

HEYWOOD, named after the Heywood family, which has been traced back to Peter Heywood, who lived in 1164, stands on the banks of the River Roach, midway between Bury and Rochdale, and nine miles out of Manchester. It is not without interest to note in passing that in the family to which the town owes its name there was another Peter Heywood, who is generally credited with having arrested Guy Fawkes on the eve of the gunpowder treason. The staple trade is cotton spinning, and the town prides itself upon the fact that all the improvements made in cotton machinery have been made in Heywood. The first doubling frame was made in Heywood. The first coiling motion in front of a carding engine was made in Heywood. In the “forties” the town possessed the largest mechanical works in the textile trade in Lancashire, which means, of course, in England. It is a town with exceedingly fine day-schools, large technical and secondary schools and well-equipped Sunday-schools. The well-known hymn, “Sabbath-schools are England’s glory,” was composed in Heywood by Mr. John Heywood, printer and postmaster, and for nearly forty years Choirmaster at the United Methodist Church. It was written during a Sunday morning service. In the course of the sermon the preacher began to speak of the good done in Sabbath-schools and, warming to his subject, he threw up his arms and exclaimed: “Sabbath-schools! They are the glory of England!” Mr. Heywood immediately drew from his pocket a small memorandum-book and began to write this hymn. It has been sung in every quarter of the globe, and is still heard at annual gatherings of Sunday-schools. Nonconformity is strong in the town and throbs with life, while Anglicanism is alert and aggressive,

The history of Primitive Methodism in this typical Lancashire town of 29,000 souls goes back to the year 1825. Its earliest missionaries came from Bolton, nine miles away. Alter walking that distance they had to carry on their work in the open-air. In a short time, however, a place in which to preach during the winter was made out of two cellars under a cottage in Spinner’s Row, Bury Street. Here the Rev. Samuel Tillotson commenced a Society and started a Sunday-school, where writing was taught as was the custom in Sunday-schools in those days. Both soon justified their existence. Mr. John Kershaw, a mill-owner, was so impressed by the simplicity, sincerity and self-denial of these people that he was moved to build them a small room known as Brook’s School in Bury Street, and to let it to them free of rent. Though a strong churchman, he even taught in the Sunday-school until the close of the school and then went to church. In the room he built a family pew for special occasions, but gave the right of the pew to the small Society. This room soon became too restricted, and a new chapel was suggested. The fresh enterprise was not approved by the Kershaw family, yet our collectors were allowed free access to every part of their mill to collect weekly pence for the proposed sanctuary. In 1835, the chapel was built in Bank Street, and was opened by Hugh Bourne. On the second Sunday big brother, Mr. James Bourne, was the preacher. In establishing the church and school in their new abode, Rev. James Garner did most valuable work.

Let it not be imagined, however, that was roses, roses all the way. The church was entirely working-class. The people had contributed to the utmost of their means and had drawn on all available outside resources to the limit. In spite of all there remained a considerable debt. Then the cause seemed to fall for a time on evil days. Several, who were responsible for the building, left the locality and altogether the little church and school were so weakened that the interest could not be paid. One morning in 1859, the people awoke to find their beloved sanctuary placarded with bills advertising its sale. This gave the needed impetus. The faithful few rose to the occasion, collected £200 in fourteen days and, with a loan from Mr. Charles Cheetham, the mortgage was paid off. This friend then made a challenge offer of £50, with the result that a bazaar was soon held, the debt extinguished and a balance of £40 was left in hand. The work from that time went ever forward. The premises in Bank Street in turn became inadequate and a site was secured in the main street, Bridge Street. At the foundation stone-laying on Saturday, May 20th, 1871, an address was given by Rev. James Macpherson. The new Church and School cost upwards of £2,000, and the opening sermon, which was long remembered, was preached by Rev. Dr. E. Mellor, of Bradford. The Doctor said at the close of the sermon that the collection of £47 which had been taken, was the largest collection he had secured during the whole of his ministry, A band of consecrated men and women, full of faith and of the Holy Ghost, rallied round the ministers of those years, the Revs. J. Mould and J. Graham, who led them to the most pleasing and gratifying success. Progress and prosperity were the rewards of an enthusiasm, zeal and devotion seldom, if ever, outshone.

In the beginning, Heywood was part of Bolton Circuit. Later it was included in Bury, when that circuit was formed, the minister in Heywood ranking as the second preacher. In 1883, Heywood, on its own application, warmly supported by the authorities of the Bury Circuit, was constituted a separate circuit under the superintendency of Rev. John Whittle, of revered memory. Ministers who have succeeded him have been Revs. Joseph Prestwich, W.H. Mason, J.T. Barkby, W. Wardle, G. Trusler, J.D. Jackson, T.J. Turley, F.J. Hopkins, W.T. Hosier, C. Moore and the present incumbent, W.F. Clulow.

At Bridge Street the old school was demolished in 1909, the accommodation being quite insufficient, and a fine new School erected the following year at a cost of £2,800. It is a most commodious and up-to-date building, with seventeen class-rooms and highly approved by all Sunday-school experts who have visited it. The Church pulsates with life and so do the Sunday-school, the Band of Hope and the Christian Endeavour Society. The services are hearty and worshipful. The very capable choir is well led under the baton of Mr. S. Whittam, assisted by the organists, Messrs. A. Barker and J.J. Mitchell, both of them musicians of rare quality. Time and space fail us to tell of the many good men and true and of the honourable women not a few who have built up this church and school, many of whom are still with us, peers of the brave souls who have passed away, of such outstanding names as Ainsworth, Barker, Bisby, Booth, Butterfield, Butterworth, Dobson, Fish, Green, Horridge, Howarth, Hardman, Hughes, Ingham, Jarratt, Judge, Midgley, Shackleton, Taylor, Whatmough and Whittaker.

The jubilee of our second town society was celebrated in 1915. When that cause was first formed in the East-end of the borough it was a notable success. Then it passed through a most critical period, when it was up against grave difficulties and had almost to admit defeat. But there were faithful souls supported by the circuit authorities who held on and eventually the brighter day dawned. An unused chapel in Miller Street belonging to the Methodist New Connexion was purchased, and, in course of time, a flourishing church and school were built up. A new church was erected in 1900, at a cost of more than £1,000. In this enterprise the officials were led by Rev. G. Trusler, who confessed only recently that, although he had helped to reduce a great many debts upon church property, this was the only church he had built during his ministry. This was followed in 1914 by the building of a school of quite modern type. The church at Miller Street has grown two well-known ministers, highly esteemed throughout our denominational borders for their work’s sake, namely, Rev. Alfred Sutcliffe and Rev. Benjamin Arnfield. Led by men like Messrs. J. Handley, W. Poole, F. Scholes, A.E. Clarke, J. Perry, J. Rome, H. lngham, N. Reseigh, G.R. Arnfield, F. Scholes, junr., good work is being done to-day and progress well maintained.

In keeping with the aggressive spirit of Primitive Methodism, Castleton, two miles distant on the Rochdale side, was missioned a few years ago and the work has been carried forward in a temporary wooden building of neat appearance, where we have now a very successful Sunday-school and a small Society. An important development awaits us there. A building fund is being gradually accumulated in the hope that, within a reasonable time, a more substantial structure will result on or near the present site, which is well chosen. Castleton is an industrial centre and is growing rapidly. In the near future hundreds of houses must go up in this particular area, indeed, the whole estate is planned for dwellings of the semi-detached villa type. Meanwhile Messrs. J. Maxwell, T. Mort, A. Barnes, and H. Dewsnap and their wives, with a few loyal supporters hold the fort and prepare to carry the flag to victory.

A word or two must now be said about the Circuit Chancellor, who has a long and notable record of service. Mr. E.C. Nicholls is well-known in the Manchester District, which has twice sent him as delegate to Conference. A Primitive Methodist by inheritance from two generations, this is the church of his choice and the church of his love. He has for nearly half a century been intimately associated with the Sunday-school and the pulpit as teacher, superintendent and preacher. He has been a sower of the seed and a reaper of the harvest. When Heywood was constituted an independent circuit, Mr. Nicholls was elected steward, and, after the passage of thirty-six years, he is still entrusted with that office. During all that time he has done honour to his order and has only missed one quarterly meeting. He has rendered magnificent service to Primitive Methodism in the town and circuit. Two District Synods have met in the town, namely those of 1897 and 1913.

Enough has been said to indicate that Primitive Methodism has a thoroughly good position in Heywood. Unlike so many circuits, we are well staffed with local preachers, who make good and who are unreservedly at the call of their own churches, although on many of them great demands are made by other denominations not so fortunate. The circuit covers a comparatively small area, but we have a strong board of officials – men of vision, of unquestioned devotion to their Lord, with business grip and constructive ability. The future is safe in such hands. They are men to thank God for. We have a host of young people, and with such leadership we are convinced that the churches and schools will respond to the needs of the new age. So it is that with faith, courage and abounding hopefulness we face the coming days sure that the best is yet to be.