You are here: HomenextPlacesnextLancashirenextManchester: Primitive Methodism in Manchester 1926 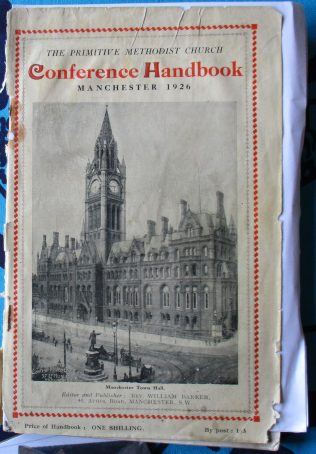 In telling the story of Lorenzo Dow’s great evangelistic mission in South Lancashire and Cheshire in the year 1805, the late Rev. A.A. Birchenough, a most painstaking and capable historian, asserts that “at Knutsford, Eleazer Harthern, the wooden legged preacher, was converted.  Harthern or Hathorn as the name was spelled phonetically by many early writers, was a native of Knutsford and after his death he was interred in the family vault in Knutsford Churchyard.  His family held a good position in an aristocratic locality, and as a youth Eleazar received a good education.  In early life he prided himself on his ability as a philosophic thinker.  He professed himself to be a Deist and then he lapsed into Atheism.  Obtaining a commission in a cavalry regiment, he fought under Sir Arthur Wellesley, afterwards Duke of Wellington, in the Peninsular War.  In one great battle Hathorn was wounded and lost his leg.  Hugh Bourne is not as a rule given to rhetorical writing, but in referring to Hathorn he says:”He had seen death flying in every direction and had walked in blood over fields covered with mountains of the dying and the dead.”

Hathorn was one of the preachers at the first Camp Meeting on Mow Cop in 1807.  He was soon acknowledged as one of the most effective and successful of all the pioneer preachers of Primitive Methodism.  As a great evangelist he travelled far and wide and led hosts of people into a newness of life.  Possibly the greatest of all his converts was John Ride, who afterwards became the “Apostle of Berkshire.”

When the Rev H.B. Kendall B.A. produced his monumental work on “The origins and history of the Primitive Methodist church” I collaborated with the later William Emsley Parker of the Higher Ardwick church (Vice President of Conference in 1895) in finding material for Mr Kendall and I cast the results of the united historical research  into something like literary form.  When the history was published a great improbability troubled me.  I had asserted the first Primitive Methodist Missionary to Manchester, Eleazer Hathorn, had walked all the way from Macclesfield to Manchester, preached three times at the New Cross, close to where the Wesleyan Central Hall now stands, and then walked back to Macclesfield – a total journey of some forty miles on foot in one day.  Reading this statement in cold print. I concluded the episode was unlikely if not impossible.  Remembering that in the early years of the nineteenth century England had no good Macadamised  highways, but only rough roads for foot travellers, pack horses and lumbering coaches, I recognised that a man with one foot could never have accomplished the feat ascribed to him.  I went back to historic sources and in an old biographical work long years out of print, I discovered an obscure footnote which stated that Hathorn was held in such high esteem by the people that they purchased a good horse for the one-time cavalry officer and that, like John Wesley, he rode far and wide on his missionary journeys.  This explains how Hathorn travelled from Macclesfield to Manchester and returned the same day.  When Hathorn visited this northern city he headed a greater charge than any he had led under the orders of the Iron Duke.

The first Primitive Methodist missionary must have entered Manchester in 1819 for Thomas Jackson, another pioneer missionary took charge of an organised mission on March 6th 1820 and a vigorous church found its first home “in a loft over a stable in Brook Street, Chorlton -on-Medlock.”  The “Long Room” in Ancoats quickly followed as a second preaching station and Ann Brownsword, an accredited preacher, led a great number of people into the Kingdom of God.  Hugh Bourne visited the mission and preached with great acceptance and power.  In 1821 Manchester was constituted a Circuit and for the first six months it was under the  superintendency of the famous John Verity.  Jersey Street chapel was erected in 1823 and the annual Conference of 1827 and 1840 were held in this building.  Within a couple of years after the inaugural visit of Eleazer Hathorn there were strong mission centres on Bank Top and in Chancery Lane.  The leader at Bank Top, a site where London Road station now stands, was a devoted man named Thomas Hewitt.  His descendants are still interested in our church and quite recently a grand-daughter has given £100 to the Rev. Jabez Bell in aid of the splendid work which is now being done at New Islington.

The Battle of Peterloo disgraced Manchester in the midsummer of 1819.  The town and all the surrounding district seethed with hatred and unrest.  The authorities banned all public meetings.  One of the officials at New Islington, a well-to-do cotton manufacturer named Samuel Waller, claimed the right of preaching the Gospel in the open air.  After the evening’s service he was arrested.  In due course he came up for trial.  The Rev. W.R. Hay who had ordered the massacre to begin at Peterloo and who had been rewarded with the wealthy vicarage of Rochdale was Chairman of the Quarter sessions and he sentenced Samuel Waller to three month’s imprisonment for “causing a great number of persons to assemble and obstruct the King’s highway.”  This imprisonment created a great stir and one outcome was that many men in good positions joined the new church.  Ralph Waller, brother of the imprisoned preacher, who lives in Mellor Hall near Marple, was one of the original signatories of the Deed Poll.  He frequently entertained Hugh Bourne and other travelling preachers.

After the persecution the new church made abnormal progress.  Ashton, Stalybridge, Hyde, Oldham, Rochdale and many other places were missioned and churches established which soon became the centres of self-supporting circuits.  The cause advanced amazingly in Manchester.  A small mission in Oxford Road gathered in a very large room built over an equally large cellar.  One evening Thomas Sugden led a meeting for praise and testimony.  The mission room was crowded and the congregation was moved with a great enthusiasm.  As the people fervently sang an old hymn which had for its refrain, “We are going home to glory, where pleasures never die,” suddenly the joists gave way and the floor fell in.  The zealous worshippers dropped into the cellar.  Only one man was seriously injured but many were terribly frightened and none desired to go home to glory that way.  This mission removed to a chapel in Ormond Street which was vacated by the Wesleyans when they opened the beautiful Oxford Road church.  Rosamond Street succeeded Ormond Street and it was afterwards followed by the commodious and successful church in Upper Moss Lane.  The last named has a marvellous history and for many years it had one of the most successful Sunday Schools in the denomination.

Higher Ardwick church has had also a wonderful record.  Taking the place of churches in Ogden Street and Hyde Road, it stood out for many years as one of the finest Gothic churches in the denomination.  Few churches have been served by more ministers who have been afterwards called to occupy Connexional positions.  Revs. T. Whittaker D.D., James Jackson, H Yooll, J Watkin and Professor Humphries M.A. attained the Presidency of the Conference.  The position of Conference Secretary has been filled by Revs. W. Goodman, J Yearsley, William Barker and Arthur Wilkes.  The Rev. W Goodman became Chief Connexional Secretary; Dr Whittaker and Danzy Sheen Sunday School Union Secretary ; W Jones Davies, Principal of Hartley College.  The late W.E. Parker was Vice President of the Conference in     1895 and the greatly beloved Mrs G.A. Genney was the first President of the Ladies Missionary Federation in 1909.

An adequate volume ought to be written to fully set out the romantic history of Primitive Methodism in Manchester.  Space however limits the record to the bald statement of the present position.  In Manchester there are now twelve circuits, comprising thirty eight churches, with nineteen ministers, 144 lay preachers, 3,361 church members and 7,555 declared adherents.  The church property in the city was cost over £180,000.  There are also 38 Primitive Methodist Sunday Schools in Manchester with 993 voluntary teachers and 7,677 scholars.

In Hartley College which cost over £60,000 our church also possesses in Manchester one of the finest and best-equipped theological institutions in the Kingdom.  There are seventy five of our own students in residence  and in addition thirty four students belonging to the United Methodist church are receiving ministerial tuition in Hartley College.  This practical example of Methodist Union provides a teaching  staff which probably has no equal in any other section of the Christian church.  In perfect  harmony  and co-operation  there are on our side Rev. H.J. Picket(Principal) and Professors A.S. Peake M.A. D.D., A.L. Humphries M.A., W.L. Wardle M.A. D.D., and Atkinson Lee M.A.. The United church supplies  Principal J.T. Brewis B.A. B.D., and Professors G.G. Hornby M.A. B.D.,  and E.W. Hurst M.A. B.Sc.. Blessed are the students who have such favourable opportunities in preparing for the great work of Christian ministry!

Our church has a great record in the City of Manchester.  Much has been done.  Much remains to be done – and withal other Christian and humanitarian agencies, our people still desire to toil to abolish evils, to bless their fellowmen, and to establish the Kingdom of our Lord and Saviour Jesus Christ.