You are here: HomenextPlacesnextLancashirenextSouthport and Primitive Methodism 1909 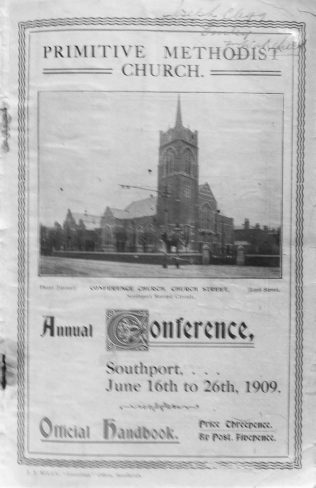 Just twenty years after the meetings on Mow Cop, Mr James Kellett of Mawdesley proclaimed the good news of the Kingdom to a group of people as he stood on a green near to Knob Hall Lane in Churchtown – then in “North Meols near Southport.”  That was the beginning of Primitive Methodism in the area now included in the Borough of Southport and possibly also of the whole area covered by the three Southport Circuits.  The evangelic fervour had travelled by way of Preston, where six years before Thomas Batty had succeeded in the face of much opposition in establishing the new movement.

It was some time however before the solitary flame became a fire.  The  first evidence of the is seen in the fact that at a later date services were held in a barn belonging to Mr John Wright (“Thomas John”).  A Daughter of Mr Kellett- the widow of Councillor Peet – is still with us, and is an honoured member of our Marshside Road Church.

It is difficult to trace the exact relation of events in these early days, especially their priority in point of time.  We do know however that by 1832 Church town appeared on the Preston plan and that the need had arisen for a place of worship, which was erected that year in Marshside Road on the same site as the present structure.  We know also that on November 13th 1836 a small building, “the framework of pole-wood and plastered over with clay mixed with straw,” was opened at Banks.  A contemporary helps us to an understanding of the situation when he says – “the congregations are great.”  Prior to this, services had been held at Banks in the cart-shed of Mr William Peet and the work at Hesketh Bank in the same Circuit predates that at Banks, but very little is now known of the precise dates.

Southport at this time was a fashionable bathing place, but “situated among dreary sandbanks, having no recommendation beyond the pure sea air.”  The now famous Lord Street was a long valley in the sandhills, which then ran parallelto the shore and the sea front was a rabbit warren; the first house there being built in 1835.  Southport then consisted of little more than a series of groups of cottages among the sandhills, together with the real beginnings of the town at the west end of Lord Street, where the River Nile ran towards the sea and the port was situated, which was south from Church town, then by far the more important place.

On October 2nd 1842 Hugh Bourne or “Burn” as he was described on the poster, preached the School Sermons at Church town, along with the Rev J Garner.  Two years later the Sermons were conducted by the Rev T Penrose and Rev Thomas Greener, father of one of the oldest preachers in the Southport Circuits – Mr Thomas Greener of Tarleton.

With that tireless energy and spirit of enterprise, which was characteristic of our fathers, the work was gradually extended to all the groups of cottages among the sand hills and in turn Blowick, Tithebarn Lane and Little London were visited, but vey little record has been kept of the work in these days,  In 1848 Southport appears on the Preston plan, the preach for the day at Churchtown taking an afternoon service at Southport – possibly in the cottage of Mrs Alice Todd, which was situated behind “The Rabbit” in Manchester Road,  The progress was however in all probability very slow and the services  irregular.  The class which met in the cottage four years later was led by a brother from Church town and its members regarded as a part of the membership of that society.  Still this may be looked upon as the beginning of Primitive Methodism in Southport itself, when the population was but little over 1,000 and the town had just gained the dignity of government by a Board of Commissioners.  Many honoured workers had a part in this pioneer work.  We will mention only one – Mr John Drought, for the sake of his work in other towns as well as here.  He was “abundant in labour” and the actual pioneer of our church  in many places in West Lancashire.  During this period the work at Banks had so greatly prospered that more spacious premises had to be erected.  This was in 1849.  At Churchtown also the need for more room led to important enlargements in 1853.

The first Primitive Methodist Church in Southport – Churchtown at that time being beyond the boundary of the borough – was built in a locality known as “South Hawes.”  The situation was a little to the right of the entrance to the Vulcan Works in Hawes-side Street.  This step was the outcome of a wonderful revival an associated with it are three names especially – the first minister of Preston Circuit at the time (Rev W Rowe), Mr Justice Armitage and Mr John Sanders,  Mr Armitage had provided a home for the little society in his house at the corner of Ball Street and Fleetwood Street (near Armside Road), and all did much to establish Primitive Methodism in the neighbourhood,  Southport had now become a separate society, and at least one member of the original class still remains with us in membership- Mr Daniel Wright.

The laying of the foundation stone of this little Bethel was a simple ceremony, and took place at 8 o’clock on a Monday morning.  Mr Armitage placed a brick in position in the presence of the members of the Society Class, and a collection was made which came to 7s 6d!  The opening day was in August 1854 and the whole structure cost £50.  A painting of the unpretending little sanctuary may be seen in the minister’s vestry at the Church Street School.  Difficulty and even crisis had a place in the experience of this church, but several brave workers, some still with us, stood by it until brighter days dawned.  In 1861 the Trustees were compelled to engage the old Temperance Hall for the Sunday services, owing to the number of worshippers, and in the following year the church in London Street (now Calendar Hall) was built at an initial cost of nearly £500.  Here Mr Joseph Barker the famous opponent of Christianity, worshipped and preached after his return to the Christian faith.  His “document” is in the Circuit safe.

The next important step in the progress of our church in this district was the creation of Southport as a separate Circuit – first as a branch of Preston Circuit in 1863 and in 1864 as a self supporting station, with the Rev F Smith as its first minister.  Southport (London Street), though not the oldest nor the largest society, was made the head of the .circuit, and the other names on the plan in 1863 were Churchtown, Banks, Formby and Holmes, with a total membership of 139.  In the following year, Hesketh Moss was added, and there was also an outpost at Ormskirk, and the membership had increased to 262.  Every now and again a new locality was entered, and Halsall Moss (1865) , Crossens (1866), New Lane (1875), High Park (1877), and also Cemetery Road 1877) appear in the plan.  Hesketh Bank was transferred from Preston in 1880.  All the above, but two, are still centres of regular work.

The first division of the Circuit was in 1880 and the churches on the Preston side of the town, with Church (Marshside Road), were named the First Circuit, doubtless in recognition of the fact the Churchtown is the mother-church of the district.  This church is a great church in many ways.  The spacious premises are well adapter to the needs of the time.  The church will seat 700, and was built in 1878 and the school buildings were completed in 1906.  The congregations of fishermen and their families, now augmented by many others  who have settled in the neighbourhood, are quite remarkable both for their singing and their numbers.  The Sunday School  is attended by at least 600 teachers and scholars.  The minister, Rev John Whittle, is travelling there for the second time.  today there are associated with it the churches at High Park and Crossens and a service is held regularly in Shellfield Road.  At High Park there is a splendid suite of buildings and a vigorous centre of Christian labour.

The First Circuit called out a probationer in 1890 – the Rev James Dickinson, who lived at Banks, and the success of this arrangement was such that it was deemed advisable to further divide the Circuit and Banks with Hesketh Banks, Mere Brow, and Hesketh Moss, were made into the Third Circuit in1895.  The society and the work at Banks have a reputation far beyond the bounds of the town.  The Day School has earned and continues to deserve the highest praise from the best judges.  The well-trained choir is known far and wide for its efficient work.  Here the congregations are still as in 1836 – “great.”  Primitive Methodism was alwaus had a leading place in the life of the neighbourhood.  Hesketh Bank is also renowned for its efficient choir and splendid congregational singing and at this church no unlet sittings have been available for many years.  This year a new church is being built at Tarleton, in a new neighbourhood – a genuine instance of enterprise and foresight.  The minister is Rev T Sowerby.

The development of the work in the Second Circuit has been very rapid within the last twenty years.  The London Street Church was adapted, a gallery added and schoolroom built at various times to meet the growing needs of the work and in the Spring of 1890 a disastrous fire at the church necessitated a change which had been long desired and sought but without success.  In 1891 the present suite of school buildings were erected and in 1904 definite steps were taken for the erection of the beautiful Church in which the Conference meets.  It was opened in October 1906.  In every way these buildings are a model of what modern thought and enterprise cam accomplish.  Sir William Hartley’s generosity, his magnificent leading and advice all throughout the scheme are well known and also the splendid gifts of Mr Samuel Hall.  The whole cost of the buildings has been about £20,000, and there remains as debt just under £1,000.  It is a pleasure to record that the beauty of this church is not merely external ; its organisation and work are most progressive and genuinely alive.  It is well adapted in every way  to meet the special needs of Christian work, such as is suitable to the life of a town like Southport.  Its success from the first is a complete justification of the enterprise and foresight which have contributed to its erection.  Associated with this church are the churches at Cemetery Road and Halsall Moss.  The present ministers are Revs J T Barkby and Frank Holmes.

The past of Primitive Methodism in Southport is a history of self-sacrificing labour, the greater part of which has never been recorded except as it is in the Book of God.  The present finds us with eleven churches (one building) , upwards of 1,000 members, about 3,000 hearers and 2,100 scholars.  Many of the churches have known a gracious spirit of revival during the past year, and the future is faced with a confident hope that Browning’s words are true of our church in this district – “ The best is yet to be.”