You are here: HomenextPlacesnextLancashirenextSouthport and Primitive Methodism 1928 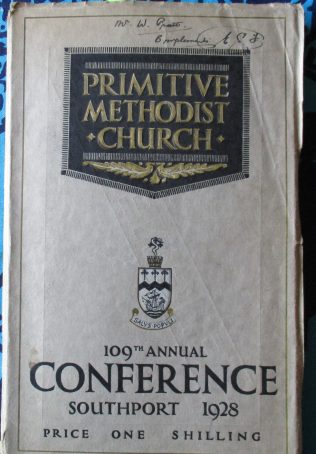 From the Conference assembled at Hull in 1821, Thomas Batty, formerly a seaman, received a new commission to proclaim the evangel of the Cross in Yorkshire.  This duty was gladly accepted and, sailor-like , he made a direct course from  east to west.  Leaving the Humber, braving difficulties and scorning opposition, he proclaimed his message to Lancashire also.  From Preston as a centre his labours were extended.  Many towns were missioned.  Thus twenty years after the meetings on Mow Cop the good news of the Kingdom was proclaimed to a group of people by Mr. James Kellett of Mawdesley, on a green near Knob Hall Lane in Churchtown – then in North Meols, near Southport.

This was the beginning of Primitive Methodism in the area now included in the Borough of Southport and possibly also in the area now covered by the three Southport Circuits.  It is difficult to trace the exact relation of events in these early days, especially their priority in point of time. We do know however that by 1832 Churchtown appeared on the Preston plan, and that the need had arisen for a place of worship which was erected that year in Marshside Road on the site off the present church.  We know also that on November 13th 1836 a small building – “ the framework of pole-wood and plastered over with clay mixed with straw” – was operated at Banks.  A contemporary gives us a glimpse of the situation at the time when he says, “the congregations are great.”  Prior to this, services had been held at Banks, but details are difficult to gather.  On October 2nd 1842, Hugh Bourne, or “Burn” as he was described on the poster, preached the school sermons at Churchtown, together with the Rev. J. Garner.  Two tears later the sermons were preached by the Revs. T. Penrose and T. Greener.

The work gradually extended to the groups of cottages scattered among the sand hills.  Thus in turn Blowick, Tithebarn Lane, and Little London were visited, but scanty records were kept in those days.  In 1848 Southport appears on the Preston plan, the preacher at Churchtown taking an afternoon service at Southport – possibly in the cottage of Mrs. Alice Todd, situated somewhere behind “The Rabbit”  in Manchester Road.  The progress was in all probability  very slow and the services were held somewhat irregularity.  A class which met in the cottage was led four years later by a brother from Churchtown and the members regarded as part of the membership of that society.

Still this may be looked upon as the beginning of Primitive Methodism in Southport itself.  The population was little over 1,000 and the town had just gained the dignity of government by a Board of Commissioners.  Many honoured folks had a hand in this  pioneer work. Mention must be made of Mr John Drought, for the sake of his work in other towns as well as here.  He was “abundant in labours” the pioneer of our church at many places in West Lancashire.  During this period the work at Banks so greatly prospered that more spacious premises had to be erected.  This was in 1849.

At Churchtown also, the need for more room led to enlargements in 1853.  The first Primitive Methodist church in Southport – Churchtown at that time being beyond the boundary of the borough – was built in the locality known as South Hawes.  The situation was a little to the right of the entrance to the Vulcan works in Hawesside Street.  This was the outcome of a wonderful revival.  Associated especially with it are three names – the Superintendent minister of Preston Circuit at the time – the Rev. W. Rowe, Mr. Joseph Armitage – the father of the President – and Mr John Sanders.  Mr. Armitage had provided a home for the little sociey in his house at the corner of Ball Street and Fleetwood Street – now Arneside Road, and all these did much to establish Primitive Methodism in the neighbourhood.  Through their efforts Southport had now become a separate society.

A painting of an unpretentious little sanctuary may be seen in the Minister’s vestry at Church Street to-day.  It has an interesting history.  The laying of the foundation stone of this little Bethel was a simple ceremony and took place at eight o’clock on a Monday morning, many of those interested having to go by the next tide to follow their calling as fishermen.  Mr Armitage placed a brick in position in the presence of the members of the Society Class, and a collection was made which came to seven shillings and sixpence.  The whole structure cost fifty pounds.  The opening day was in August 1854.  Difficulties and even crisis had their place in the experience of this church, but several brave workers stood by it until brighter days dawned.  In 1861 the Trustees were compelled to engage the old Temperance Hall for the Sunday services owing to the number of worshippers: and in the following tear the church in London ‘Street (now Calendar Hall) was built at an initial cost of nearly £500.  Here Mr. Joseph Barker, the famous opponent of Christianity, worshipped, and preached after his return to the Christian faith.  His document is in the Circuit safe.

The next important step in the progress of our church in this district was the creation of Southport as a separate Circuit – first as a branch of the Preston Circuit in 1863 and in 1864 as a self-supporting station with the Rev. F. Smith as its first Minister.

London Street, though not the oldest nor the largest society, was made the head of the Circuit.  The other names on the plan were Churchtown, Banks, Formby and Holmes, with a total membership of 139.  In the following year Hesketh Moss was added and there was also an outpost at Ormskirk.  The total membership had increased to 262.  Every now and again a new locality was entered, and Halsall Moss (1865), Crossens (1866), New Lane (1875), High Park (1877), and also Cemetery Road (1877) appear on he plan. Hesketh Bank was transferred from Preston in 1880.  All these places, with the exception of two, are still centres of regular active work.

The first division of the Circuit was made in 1880.  The churches on the Preston side of the town with Churchtown (Marshside Road) became the first Circuit; doubtless in recognition of the fact that Marshside is the mother church of the district.  This is a great church in many ways.  The premises are spacious and its equipment is up to date.  The Church will seat 700 and was built in 1878; the school buildings being completed in 1906.  The congregation of fishermen and their families, now augmented by many others who have settled in the neighbourhood is remarkable for its zeal, singing and numbers.  The present minister. the Rev. Joseph Grainger, is the Conference Arrangements Secretary.  There are associated with it the churches of High Park and Crossens and the services regularly held in Shellfield Road.  At High Park there is a splendid suite of buildings which are a centre of vigorous Christian labour under the guidance of Pastor J.E. Platt.

The Third Circuit comprising the churches of Banks, Mere Brow, Hesketh Moss, Hesketh Bank, and Hesketh Lane was formed in 1895.  The society at Banks and its work have a reputation far beyond the neighbourhood.  The Day School has earned and continues to earn the highest praise.  The well-trained choir is known far and wide for its efficiency.  Here the congregations are still as in 1836 “great.”  Primitive Methodism has always had a leading place in the life of the community.  Hesketh Bank is also renowned for its efficient choir and splendid congregational singing.  So well is the church attended that active preparations are being made for the building of a new edifice.  Mere Brow also exerts an inspiring influence, and good work is being done by the Hesketh Lane and Hesketh Moss churches in their respective spheres.  These churches are under the capable and sagacious leadership of the Rev. L.J. Jackson and a host of stalwart and energetic workers.

The influence and extension of the Second Circuit have increased with the years.  The old London Street church had been altered and adapted to meet the growing demands of the work, but a disastrous fire in 1890 which occurred during the strenuous and active ministry of the Rev. Thomas Guttery, father of Dr. A.T. Guttery, brought about many changes.  In 1891 the present school buildings were erected and in 1894 definite steps were taken towards the erection of the beautiful church in which Conference will assemble.  It was during the well-remembered ministry of the Rev. J.T. Barkby which extended over the long period of thirteen years, that the church was opened in 1906.  In every way these buildings are the model of what modern thought and enterprise can accomplish.  Sir William P. Hartley’s generosity and his magnificent leadership and advice all throughout the scheme are well known, and also the splendid gifts of the late Mr. Samuel Hall.  This attractive and artistic church is a lasting memorial to these and many other worthy benefactors.  Its cost has been somewhere near £25,000.  Its beauty is not merely external.  The organisation and work are progressive and genuinely alive.  It is well adapted to meet the special demands of Christian work suitable to the needs of a town like Southport.  Its success from the start is a complete justification of the enterprising foresight which led to its erection.

Associated with it are the churches of Cemetery Road and Shirdley Hill, both serving faithfully and well in their respective localities.  Shirdley Hill is the most recent addition, having, owing to changing conditions, superseded the old Halsall Moss chapel.  Planting this church in a new and growing neighbourhood has been triumphantly justified.  The present ministers are the Revs. Albert Lowe and Joseph Henderson.  They have the willing co-operation of many experienced and loyal workers in every phase of Christian activities.  The total membership of the three circuits in about 1,200.

The assembling of Conference is a great event, full of significance, that arouses anticipation and carries many memories.  It is worthy of mention that two superannuated ministers have for some tears made their home in the second circuit.  The venerable Rev. W. Kitson, who was looking forward to the Conference with not a little interest, passed away in the month of March.  He had reached the ripe age of 89, and his interest in the church and the Kingdom was keen to the last.  The Rev. F.N. Shimmin still enjoys  good health and is able to render service in many ways.  He is still exploring, still making discoveries and announcing them with vigour.  To the retiring President there will come delight in completing his Presidential year in the neighbourhood, and probably on the very spot where his honoured father served God and laboured so graciously for his fellow-men in the years long past.