You are here: HomenextPlacesnextLancashirenextSt. Helens, Lancashire 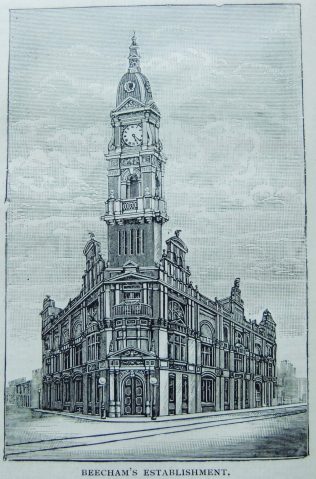 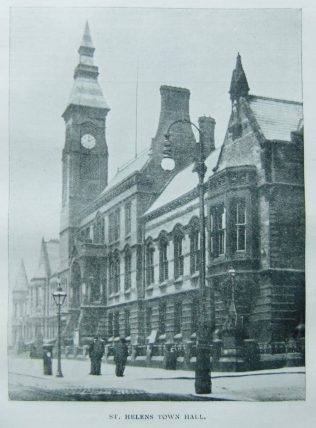 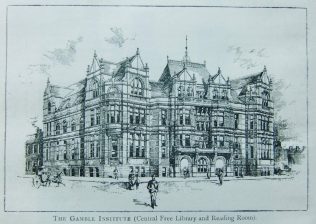 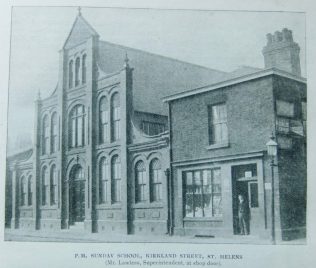 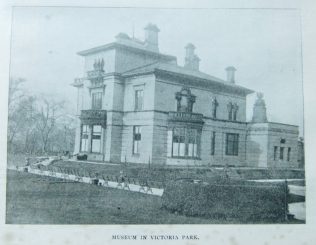 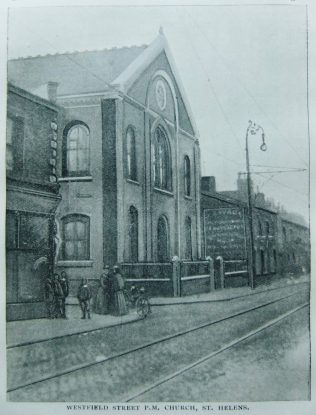 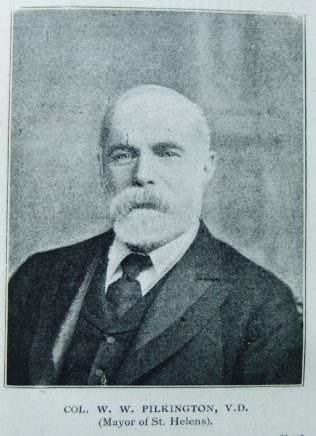 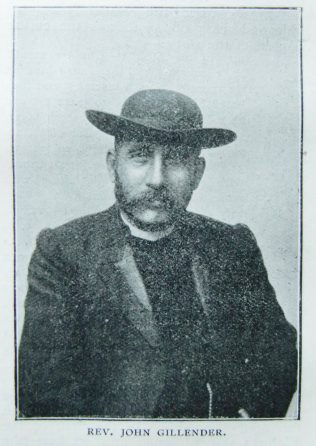 Transcription of Article in the Christian Messenger by ‘Tynesider’

Who has not heard of St. Helens? Has not that which is said to be “worth a guinea a box” made it famous and almost immortalised it? It is not, of course, for us here to give details of the very much advertised pill establishment; but we may say that as we look at the magnificent building familiarly spoken of as “Beecham’s,” and reflect on its history, we imagine it says to us – “Despise not the day of small things. Look at me! My beginning was small, but by skill, industry, tact and perseverance have I been reared.”

The name of St. Helens, according to a local historian, seems to have been given to the confluence of houses gathered round the church dedicated to the Saint of that name, probably as early as the middle of the 14th century. The reader may be astonished to learn that, although the town contains a population of eighty-four thousand souls, there is, strictly speaking, now – only one house in St. Helens! This ancient building stands near to dear “St. Ellin Chappell,” or that which is now called St. Mary’s, the parish church.

The town, though good commercially, has not an excellent reputation for either pure air or scenery. “St. Helens! Saint Helens!! ” some of our friends have somewhat sarcastically said. “Nothing will grow there – the chemicals kill vegetation,” once declared a reverend gentleman; but, unless his theology and pulpit utterances are more correct than this statement, his hearers are to be pitied! We need not go a quarter of a mile out of the town to see signs of agricultural prosperity, and, when in season, to hear the sound of the reaping machine. It must, however, be acknowledged that as a stranger approaches the town by either of its railways, the sight of chemical works and a little consciousness of something peculiar in the air; the presence of many chimneys belonging to the glass, bottle, engineering and other industries; and the appearance, too, of some dingy red-brick houses – these, of course, make an unfavourable impression; nor will it be improved by a visit to some of the old streets and a knowledge of the social and moral condition, of some of the inhabitants. Drink, improvidence, gambling and immorality abound in St. Helens as, unhappily, they do in all large towns. Away a little from the various works are many beautiful residences, three splendid public parks, and a “Queens Recreation Ground”; and the general surroundings are picturesque.

In many respects the town is up to date. The electric car service has been in operation about three years; and now we can have the pleasure of reaching Liverpool – a distance of eleven miles – by this method. There is, to our sorrow, no School Board, but there is a capital unsectarian High School for boys and girls. It is most gratifying to record that in the borough there are four free libraries and reading rooms. The Gamble Institute – a splendid block of buildings, with its excellent librarian and courteous assistants – is a great boon to all lovers of newspapers, magazines, and books. It is the gift of Sir David Gamble, Bart., C.B., of whom and of whose thoughtful generosity the town is justly proud.

That old gentleman at Rome – the Pope – occupies in this district an almost impregnable position. To see the Catholics with their flags and banners on “walking day,” to then listen to the bands of music, and to behold the many “fathers” and their vast followers – this indeed is enough to make a Kensit go into hysterics! The Anglican Church is also strong and its clerics are fairly alert. Congregationalism and Wesleyanism are here great religious forces, and many of the leading citizens belong to such.

According to tradition, when an old St. Helens Congregational Minister was on his death-bed, there was a very profligate old man, a member of the congregation, who came to see him. “Ah,” said the dying minister, when he lifted up his eyes and saw him, “You have been one cause of my death! ” The effect of this “parting shot” is, unfortunately, not recorded.

The Baptists have three comparatively small churches, and at one of which, a few years ago, the now renowned Rev. C.F. Aked, D.D., was pastor. Presbyterianism (English and Welsh), Free Methodism, and other sects are also represented. The present Mayor, Colonel W.W. Pilkington, V.D., is a Congregationalist, and takes a very great interest in everything concerning the town’s social and moral weal. He has been a great friend to all the Churches, and lately he has given £100 towards a big scheme in connection with our own Church. During the late Simultaneous Mission, the Rev. J. T. Parr, late of Surrey Chapel, made his home with this gentleman.

We think that Primitive Methodism in St. Helens can give a fairly creditable account of itself. In March, 1851, it was reported as a branch in connection with the Warrington Circuit. It had then five places, and its quarterly income was £9 2s. 11½d. We will not say more about those “good old days” except that we note “£5 salary was objected to by Warrington Quarter Day,” and that £3 6s. 3d. was the amount of the minister’s “Meat Bill and Lodging ” account. A few years later the branch – owing to jealousy or something else – is in the Lymm Circuit; later still, it is made into a separate station, and from it the present Earlstown Circuit came into existence.

There are now seven places on the St. Helens Circuit plan, three of which are in the borough. The Westfield Street Society is the “head” of the Circuit. Its membership is 150, it has over 330 scholars, and its “levy” to Quarter Day is £31 10s.

In 1897, during the five years’ ministry of the Rev. James Wright, the old school in Kirkland Street was replaced by the present admirable structure. In it are two tablets. One indicates that “this stone” was laid by the Superintendent, Mr. J. Lawless, on behalf of the teachers and scholars. The other reads thus:
“In affectionate remembrance of Jean, the beloved wife of Thomas Seddon, Schoolmaster, Eccleston, and mother of the Right Hon. R.J. Seddon, New Zealand (1816-1868).
“I came to Jesus as I was,
Weary and worn and sad,
I found in Him a resting-place,
And He has made me glad.”

In addition to the usual Sunday School organisations there are rambling, cycle, and cricket clubs.

The chapel in Westfield Street, though not possessing much outward adornment, is a good building, is well situated, and will seat about 700 persons. It has recently undergone a much-needed internal transformation, viz., the erection of two class-rooms and an organ chamber, the installation of the electric light, and painting, etc. A splendid new organ has just been erected in the church, the whole scheme involving an expenditure of £1,100.

One of our promising young men (a son of a respected Trustee) who volunteered to join the British in combating the Boers died of disease, and in memory of him his parents have placed near their pew a neat tablet in the church. It reads as “ In loving memory of James Fishwick, who died and was buried at Ladysmith, South Africa, on April 18th, 1901, aged 21 years. Rest in Peace.”

We must not say much respecting the personnel of our church, but it may be said that there are so few “real gradely ” Lancastrians members of it, that if such good Staffordshire and Shropshire folks as the Slinns, Savages, Tranters, and Noads, and some excellent people from other counties were taken off the roll, the remaining sisters and brethren would feel somewhat lonely and probably be crushed by their church’s financial burdens! With a few exceptions our people are engaged in the glass and bottle works, and their “turns” are on days and nights, so that life in this part of Lancashire is greatly different from what it is in such places as Burnley, Blackburn, Bolton, etc.

If space had permitted there are several excellent workers to whom reference might have been made in this magazine. For some time the Circuit Stewardship was held by the late Mr. D. Chadwick, J.P., but of late years Brother P. Wright has filled this important position. The Rev. John Gillender came from Haslingden to St. Helens in 1900, and has accepted a unanimous invitation to remain until July, 1903. The Circuit’s outlook is good, and in the town itself is very wide scope for the uplifting activities of Primitive Methodism.

VISIT OF THE PREMIER OF NEW ZEALAND.

Our readers will be interested to learn that on Sunday, July 6th, 1902, the Right Hon. R.J. Seddon, accompanied by the members of his family and the Mayor of the Town, paid a visit to our Kirkland Street Sunday School. He was formally introduced by the minister to the respected Superintendents, Messrs. J. Lawless and H. Noad. After the pathetic inspection of his mother’s tablet, the Premier delivered an interesting address respecting Primitive Methodism in Lancashire and in New Zealand.