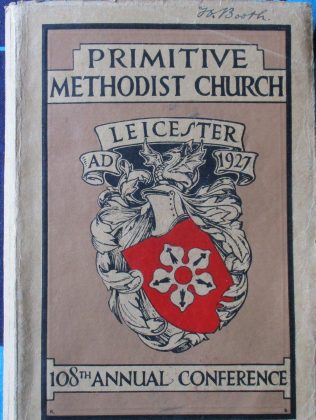 On Sunday March 1st 1818 Primitive Methodism made its first appeal to Leidester.  On that day a big crowd assembled at the Cross, Belgrave Gate.  John Benton, a powerful open-air speaker, preached from the words: “Let me die the death of the righteous and let my last end be like his.”  Amongst those then waon to Christ was one William Goodrich who afterwards rendered distinguished service.  From that March day, progress was rapid and sure.  William CLowes, the chief apostle of Primitive Methodism, after a tiring day in the villages, arrived in Leicester on a Sunday evening.  The next morning John Wedgewood and he preached to a crowd of two thousand people in Belgrave Gate..  Their texts were Job 22:21 and Revelation 3:20.  The service was orderly the people as reverent as if in church.  There followed that afternoon a four and a half hours’ prayer  meeting in a house in Orchard Street.  Like another house in Galilee long ago whe Jesus was the Magnet, this house was crowded to the door; many stood outside listening to the prayers and exhortations and songs of those within.  Twenty people then surrendered themselves to Christ.

The results of those first meetings were notable.  Men and women of marked individuality were consecrated to its extension.  A small chapel in Millstone Lane was rented and used for some months as a meeting place, but by Christmas Day 1819 a chapel had been built in George Street.  James Bourne, the brother of Hugh Bourne, one of the founders of our church, preached the opening sermon.  The story of the building of that chapel is full of romance and there are those in membership with us today whose ancestors played a worthy part in that venture.  The cost was £1,500 and the sum of £850 was raised, a great achievement for those days.  That sanctuary became a centre of much redemptive service.  In 1882 the society removed to Belgrave Gate where a new church and school had been erected at a cost of  £9,000.

In 1829 what had been an Independent Methodist chapel in Alexander Street was bought for £250 and here began a work which grew into what is now the second circuit.  In 1841 a chapel was built in York Road and in 1873 these two societies united in a new and commodious church in St Nicholas Street.  After twenty-six years this church was doomed for street-widening, but the pieces of stonework on the front were carefully numbered and the church re-erected in its original form  on the Fosse Road and modern school buildings added.  Immediately preceding this, there was built the magnificent pile of buildings where the Conference sessions are being held.  In January 1860 Curzon Street church was opened for worship.  In a few years the church had to be enlarged and new schoolrooms built.  It became the head of a circuit in 1874.  The same year a new cause was started in Humberstone Road.  In 1881 a small chapel was erected and in 1911 the present church.  Melbourne Road church was built in 1883 and a school-chapel in Leicester Street, North Evington in 1896.

A hundred years ago Belgrave was a small village.  In 1838 a chapel was built in Claremont Street on the site of the present Junior School.  For more than a generation splendid work was done in it.  In 1880 the church was built and the erection of the Hilton Memorial Schools in 1903 has given an ideal block of buildings for the varied work of a Christian church.  It became the head of the fourth circuit in 1904 and an offshoot is Beaumont Hall where the foundations of a strong church are being laid.

The first circuit started work in the Catherine Street district forty years ago, building a schoolroom and in 1903 a church.  More recently a hall in Edge        Hill Road was purchased.  The neighbourhood is growing rapidly in populations and extensions will soon be necessary.  In Aylestone Park the second circuit commenced services in 1875.  In 1876 a wooden building was erected and served for church and Sunday school for seven years, when the present church was built and in 1899 there were added well built schools.  In a network of streets behind the Royal Infirmary is Crown Street church, known for its evangelistic fervour throughout its forty years.

Outside the city, Primitive Methodism is represented by many strong churches, some of them equal to the best in the denomination.  In population some of the Leicestershire villages are equal to many well known towns and most of our churches are large, well equipped, standing in commanding positions.  Many of them have a long and splendid history.  Space forbids naming any of these, but in all the circuits there are praiseworthy features.  From the first days of our church until now, many families have continued membership.  We have reached the third and fourth generation of Primitive Methodists, each generation equally devoted and faithful.

All the big churches in the city are debtless, as also are many other churches in the various circuits.  In no case is there a debt which is really a burden.  This happy state of affairs is due to the loyal service and generous giving of the people.  The last eight years have  been especially marked by the clearing of church debts.

In each circuit there have been from the beginning good officials – intelligent, godly, devoted – with a real gift of leadership.  Their influence has been felt in every branch of trade and business.  In this twentieth century there have been four Primitive Methodist mayors – Alderman S. Hilton J.P. and his son, Councillor G.E. Hilton, J.P., Dr Charles Lakin and the present mayor, Alderman T.W. Walker.  From the beginning, the churches have been served by many ministers of outstanding ability and power, whose names shine in the records of the years.

For a few years now, no new church has been established in the city, but the building of thousands of houses in the suburbs creates an opportunity which cannot be neglected for long.  When all the Methodist churches are able to pool their resources and apply their gifts of statesmanship to the city’s needs, we may expect the erection of many new churches, even if the name “Primitive” be not inscribed thereon.  The influence of Methodism in this thriving city will yet be beyond anything its best days have seen.