You are here: HomenextPlacesnextLeicestershirenextLoughborough Circuit Centenary 1917-1918

Souvenir booklet, together with the first quarter's plan for 1918. 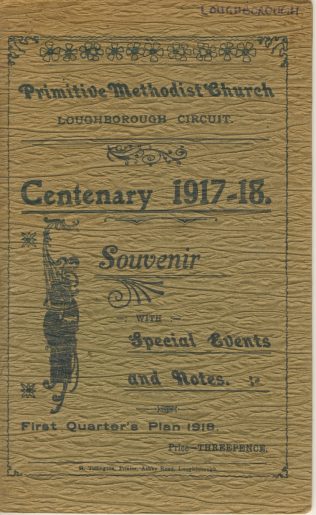 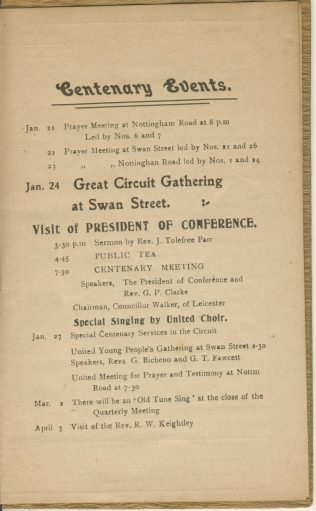 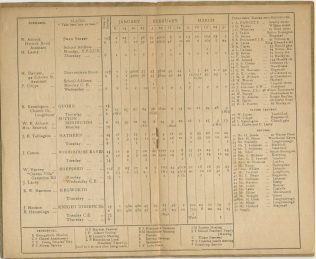 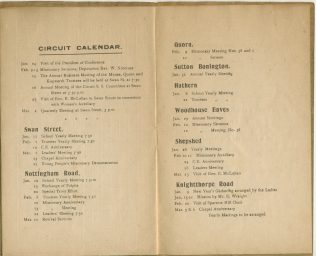 This booklet, gifted by Stephen Hatcher to Englesea Brook Museum, was published to mark the Centenary of the establishment of Loughborough Primitive Methodist Circuit.  It was printed by H. Tollington, Ashby Road, Loughborough and would have cost you threepence.

The introduction of Primitive Methodism into Loughborough.

The complete story of the beginnings of our Church in this locality cannot be told and yet with certitude the background of the story has been filled in by our Connexional Historians.  At the opening of the 19th century there was general depression in the country, which was accentuated by the enactment of the Corn Laws in 1815.  This led to an industrial revolt which showed itself in the destructive work of the Luddites and the teaching of the Levellers.

In the spring of 1817, six men were hanged in Leicester for smashing machinery un a Loughborough lace factory.  The crime with its barbarous punishment brought a great deal of trouble to the town and interfered with industrial prosperity.  It was within a few weeks of this direful event that John Benton and evangelist entered Loughborough and by open-air preaching succeeded in establishing the first Primitive Methodist Mission.

IN January 1818, Hugh Bourne visited the town and during succeeding months made several visits to organise and consolidate the work.  The new cause made rapid progress.  By May of the same year, a piece of land had been bought and a Chapel built in Dead Lane.  This was the mother chapel of Primitive Methodism in Leicestershire.  Many of the surrounding villages responded to the burning appeals of our evangelists, and before the close of the year Loughborough became the centre of o new circuit.  In July 1820, a remarkable Camp Meeting was held on Windmill Hill, Woodhouse Eaves.  The crowd was immense and it is stated that quite 300 souls were added to our church in the town and surrounding villages.

Loughborough was one of the earliest circuits formed, being given the third place by our historians and it must certainly be ranked amongst the most fruitful mother-circuits of Primitive Methodism.  According to the plan of 1823, the Loughborough Ministers and Local Preachers travelled into five counties, going as far as Coventry in the West and Northampton in the South and at the Conference of this same year the Circuit could report a membership of 1448.