You are here: HomenextPlacesnextLincolnshirenextEpworth, Lincolnshire 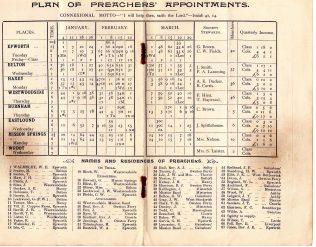 Epworth is a place that naturally links with Wesleyanism, or the Methodist New Connexion, for it was the birthplace of the founder of Methodism John Wesley, and also of the first reformer of Methodism, Alexander Kilham. However it was a strong centre of Primitive Methodism. The 1851 religious census identified the Primitives as numerically stronger than either of the other two Methodist branches. It returned 400 adult attendances and 107 children, the Wesleyans 404 adults and and 60 children,  the M.N.C. 181 adults and 120 children. Additionally John Petty records in his Jubilee History how it became a circuit in its own right and so reported 624 members to the Conference of 1853.

It was first a part of the strong Scotter circuit, with early missionaries such as Praying Johnny Oxtoby, and the first chapel was built in 1821, largely as a result of the work of Stephen Jenkinson from Owston Ferry. The chapel building was purposively pushed through so as to open on the 27 May 1821 by W.G. Belham (see P.M. Magazine 1836 missionary anecdotes of W.G. Belham) just before the Wesleyan Chapel  (which was itself to be opened by Dr. Adam Clarke). So it was built by local craftsmen rather than waiting for the builders from Hull.

Belham wrote: “The plan they thought of and entered into was to send to Hull for workmen to raise up this house of prayer. At this the tradesmen of Epworth were offended and it became public house talk. At last they came to the I, ‘The Ranters shall have a chapel.'”

The proximity to the Primitive centre of Hull was important with the daily link via the paddle steamer that travelled from Gainsborough to Hull up the river Trent and vice versa. So when William Clowes visited Epworth he came via the steamer to Owston Ferry where he was met with a donkey cart and thus conveyed to Epworth.

John Garner (former President of the P.M. Conference on six occasions)  superannuated to the nearby village of Burnham, and was in 1856 interred within the precincts of the Epworth Primitive Methodist chapel. He had travelled in the Scotter circuit 1833-1835.

The Epworth Circuit extended into north Nottinghamshire and Yorkshire. Rev. Parkinson Milson (1825-1892) wrote the following verses to celebrate the work of God in the various parts of the Epworth Circuit:
“At Butterwick and Burnham Lord,At Beltoft, Crowle and Haxey too,O clothe with power Thy gospel word And every blood-bought soul renew.

Let Westwoodside and Epworth rise,  And pour Thy grace on Luddington: Let Keadby feel thy opening skies, And Amcotts be to Jesus won.

Set Epworth Circuit on a blaze, Through all earth’s millions spread the flame; Hell’s legions fill with dire amaze, And heaven and earth shall praise Thy name.”