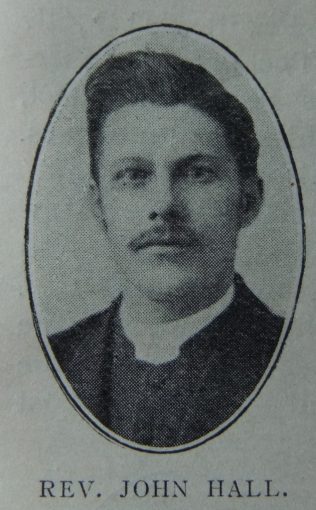 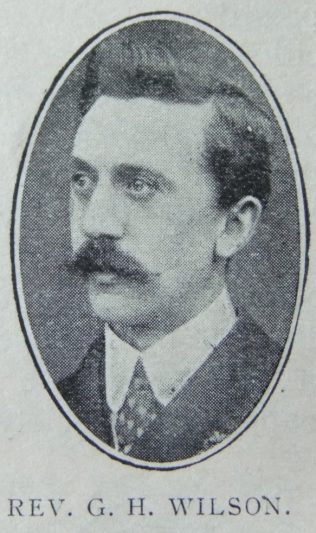 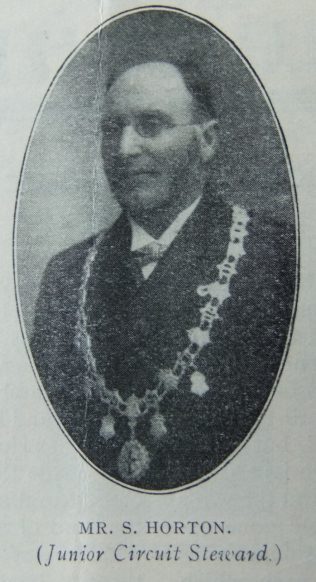 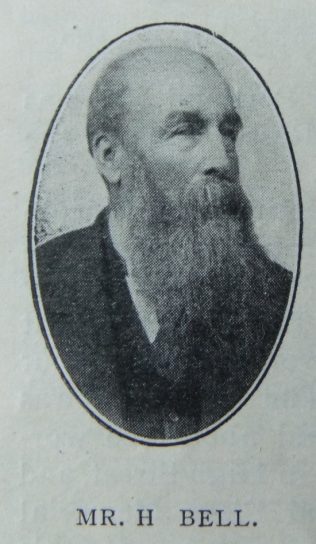 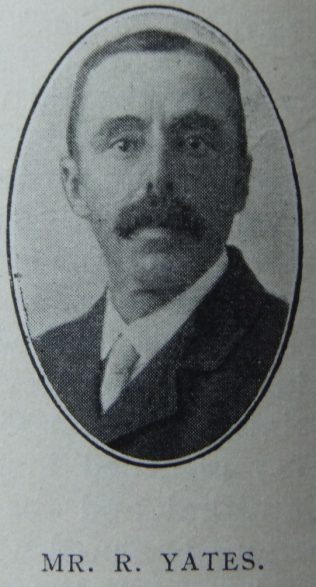 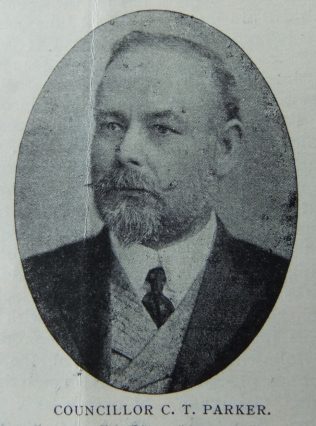 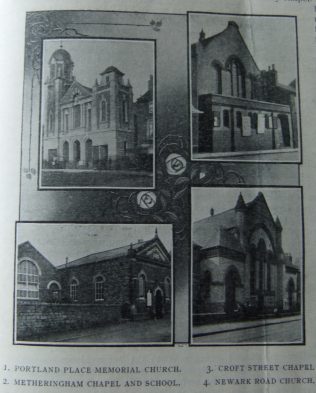 Transcription of article in the Christian Messenger by John Hall

Lincoln dates back, as its name implies, to the time of the Roman occupation. Originally it was on the top of a steep hill and was walled around, but it has dar out-grown its ancient limitations and the walls are completely gone except what is known as the Newport Arch, which was built about the time of Christ, and a small portion of the old wall which will no doubt soon be removed. It has had an unbroken succession of Sheriffs for over 500 years, many of whom have been distinguished. In many ways it figures in history and is full of interest to the antiquarian.

Primitive Methodism was introduced to Lincoln by the Revs J. Wedgewood and the sainted William Clowes, in the year 1818. They preached in the open-air between the Cathedral and the Jail. Some evil-minded persons procured a goat, and with the beast tried to upset the meeting, but the preachers continued and delivered their message. From this the work so prospered that in 1820 it was made a Circuit, from the Nottingham Circuit. Mr. Fieldsend, in his Diary, speaks of a mighty camp meeting held in 1821, at which he says thousands attended. From this the Circuit gradually grew. In 1826 the following appeared in the Plan as preaching places:- Lincoln, Ingham, Fillingham, Glentham, Glentworth, Saxilby, Bransby, Brampton, Willingham, Sturton, Welton, Nettleham, Reepham, Fiskerton, Branston, Branston Moor, Skellingthorpe, Bardney, Kirkstead, Thimbleby, Bucknall, Minting, Horncastle, Hemmingby, West Ashby, Ashby Puerorum, Fullettby, Scramblesby, Donnington and Benniworth. Since then Horncastle has been made the head of a Circuit, Ingham was made the head of a “Branch” which was afterwards thrown back into the Lincoln Circuit. At a later date the Lincoln Circuit divided with Portland Place as the head of the first, and Rasen Lane as the head of the second Circuit.

At the June Quarterly meeting, 1826, Lincoln society sent £1 5s. and the total income for the Circuit was £14 13s. 11½d. Brother Saul’s salary was £4 and Sister Burk’s £2 2s. The parent society in Lincoln has worshipped in four chapels in succession. The last one was Portland Place, which held about 700 worshippers, the present one is in High Street, and is known as the Portland Place memorial Church. It is a really fine structure. It seats 950 worshippers and has ample accommodation for a large number of Sabbath School scholars with vestries, etc. There has been placed in the Church a splendid three manual organ which cost, with electric blower, £1,050. Altogether the property cost more than ever was anticipated, the total outlay being £13,831. Of this amount there remains at present a debt of over £5,000. The Church now numbers about 300 members, and is “levied” to quarterly meeting at £52 10s. per quarter. There is a flourishing school of which Councillor C.T. Parker and Mr. J.C. Timson are the superintendents. Altogether the church is a hive of spiritual industry. The society class meetings are well attended. Mr. Timson’s class alone has a membership of 150, and will often have an attendance of more than a hundred. Both young and old are working heroically to spread the Kingdom of God, and reduce the financial liabilities of the trustees. Many names of truly worthy toilers could be given. The late Mr. Broadberry, J.P., and Mr. T. Clarke, are honoured among those who have lately passed away. At present Councillor C.T. Parker is the Mayor-elect for the City for the next municipal year. He will be the first Primitive Methodist Mayor of the city. He is popular in the city and much beloved in the church. In addition to being superintendent of the school, he is a class leader, the society steward and the senior station steward, etc. Last year he generously gave 10 per cent. on all money raised at the bazaar, and is doing the same this year. Then there is Mr. Timson, a highly respected class leader and Trust treasurer, and who has been President of the Lincoln and District Sunday School Union, an honour which some esteem with even the highest civic office. Mr. H. Bell has had that honour and Mr. S. Horton too, who is a trustee of the church, but a member at Newark Road in the Circuit. Mr. Horton is a member of the District Council, and of the Board of Guardians, etc. He is a Circuit steward and an invaluable worker in the cause of God. Other might be given of men who are rendering splendid service, as Mr. W. Clarke, the Trust Secretary, Mr. W. Witworth, the assistant Society steward. The Circuit has had a long list of honoured superintendent ministers among whom might be named: Revs. John Wenn, Joseph Timmins, William Jones, G.R.D. Austen, I Hadfield, W. Pigott, DD, J. Keightly. The present superintendent is Rev. John Hall, who has as his colleagues Revs. G.H. Wilson and J Grant.

While Portland Place Memorial Church is the head, and by far the most important church in the Circuit, yet the other churches have noble histories, and have some most worthy workers connected with them. In all, the Circuit has five churches in the city. Newark Road, which is under the care of the second minister, is a beautiful structure which cost £2,700. The society has 100 members and a school of 250 scholars. A new organ is to be placed in the church costing £320. Mr. Carnegie has promised £160 towards this outlay. Then there is Croft Street, which cost £2,200. It is a good substantial building, connected with which there is a church which is now beginning to thrive. Great Northern is the latest addition to the Circuit property. It has a large hall well adapted to mission work, and is well manned with workers. It is confidently expected that this mission will be, not a source of trouble, but of real strength, to the Circuit. New Boultham is a beautiful, if not large, church, and is really within the city. It is in charge of the junior minister. Here they have an exceptional choir, under the capable leadership of Mr. R. Horton, who is a fine musician. But no account of the Circuit would be complete without reference to the country societies. At Potterhamworth there is a small chapel with few members, but they are conspicuous by being great of soul. Here blind Jane can remember the texts of all the preachers, and the sermons, and if they preached at all, for the last thirty years. Blind Jane has more light in her heart than millions who have two faultless physical orbs. Here also is the time-honoured local preacher Mr. J. Baker. They have no instrument at “ Hannoth”; the preachers line out the hymns verse by verse, and the tune starter, Mr Teather, never fails to find the tune. Even when a young preacher thought to puzzle Brother Teather by giving out the Te Deum he started and sang it through triumphantly. Dunston is a pretty little country chapel. Here Mr. W. Blow has held the fort against much opposition, both from cleric and squire, for many years. While at Metheringham, we have one of the must prosperous country societies in Primitive Methodism. This appears all the more remarkable when it is remembered that nearly all the village until lately belonged to Mr. H. Chaplin,of Tariff  Reform fame, and thus came under high aristocratic influence; our cause has prospered, and of late, that prosperity is greatly due to the noble and efficient leadership of Mr. R. Yates. Others have helped but he has led. During the last year a schoolroom, which is a triumph for Primitive Methodism under the circumstances, has been erected.

At Martin there is a fine village chapel seating nearly 200 worshippers, and a good schoolroom. The chapel has a tower in which there is provision made for a public clock for which the late Mr. Webster has left a legacy of £10. Many notable names are connected with the society. Mr. Andrews is one beloved name, and Mr. Smalley who passed away some years ago. Mr. Hy. Taylor is the Society steward and is a popular local preacher. He is often in great demand even to-day for special occasions. He was one of the pioneers in establishing our cause at Timberland.