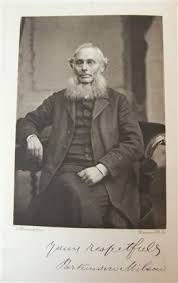 Parkinson Milson was born at Broughton, near Scunthorpe, in what is now North Lincolnshire. H.B. Kendal the historian, and native of the Scotter circuit which included the Scunthorpe area, described Milson as a “red- hot revivalist and preacher of holiness.”

As a travelling preacher the majority of his travelling was in Lincolnshire, being in the Epworth circuit from 1861- 1864.The EPWORTH PRIMITIVE METHODIST circuit had originally been part of the SCOTTER circuit. Milson wrote the following verses demonstrating the Ranter missionary zeal to seize  the whole countryside for Christ, for many of the places are no more than hamlets. This poem was included in his collection ‘Salem’s Harp: Hymns and Poems.’

“At Butterwick and  Burnham Lord, at Beltoft, Crowle, and Haxey too,

O clothe with power Thy gospel word and every blood-bought soul renew.

Let Westwoodside and Epworth rise, and pour thy grace on Luddington:

Let Keadby feel thy opening skies, and Amcotts be to Jesus won.

On Wroot Thy burning glory send, on Eastoft pour a sweeping shower.

At Thorne Apollyon’s plans disarm, and every precious spirit bless.

Set Epworth Circuit on a blaze, through all earth’s millions spread the flame:

Hell’s legions  fill with dire amaze, and heaven and earth shall praise Thy name.”