You are here: HomenextPlacesnextLondonnextPenge and Bromley Circuit, London 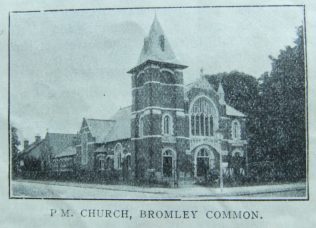 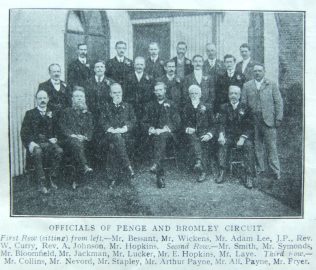 Transcription of Article in the Christian Messenger by William Curry

THIS Circuit is the youngest in the Metropolitan area, but at one time formed part of one of the largest and oldest in the Connexion. It was carved from Croydon Circuit in 1899, and consists of three places, Penge, Bromley, and Orpington.

The first place on the Circuit, Penge, was missioned by friends from Croydon, when Croydon, not as yet head of a Circuit formed an integral part of a large station extending from Forest Hill in the north to Redhill in the south, and from Penge to Wimbledon. The first record of Penge Society is that of a report to the June Quarterly Meeting of 1865. “Penge, three members, contribution to Quarterly

Meeting 6s. 8d.” At present there are over one hundred members and the quarterly income is more than £20. Yet this growth has been by no means rapid, for three years after the first report, the three had become only eight members. Small though their number was, their faith and courage were large, for they purchased a chapel in Hawthorn Grove from the Baptists, and a Sunday school was started with fourteen scholars.

In 1869, the Rev. Jesse Ashworth came as minister to the Croydon Circuit. Soon after his arrival the present site in Beckenham Road was secured. In 1871 an iron chapel was erected to seat 150 at a cost of £626. With the new chapel the membership soon rose to fifty-three.

The ministry of Rev. W. E. Crombie (1880-1890) is recognised as a period of special prosperity. In 1882 Penge Chapel was built at a cost of £2,554 and opened by Dr. Antliff. About half of the money was raised, which is unmistakable evidence of generous giving. A working man alone gave £50, the savings of a life-time.

There are many grander buildings than this modest chapel on the main road, with its tiny school behind, but few bear witness to greater self-sacrifice and devotion. The foundation laid by faith and loving gifts – the building of the superstructure, not only the material one, but the spiritual, has been accomplished by the same persistent labour and willing sacrifice. A noble band of workers, to whom this sanctuary has been endeared, have spared neither time nor substance in sustaining the work of God.

The society at Bromley was commenced in 1869. A letter from the Rev. J. Philips of Plumstead to the Rev. Jesse Ashworth said that two members had removed to Bromley, and if Mr. Ashworth thought of opening a mission there he might rely on their help. Mr. Ashworth lost no time in going to Bromley and duly found Mr. and Mrs. Homewood. A mission was decided upon at once and a room used as a day school was rented in Stanley Road The first services were conducted by a layman from Sutton, Mr. Elford, who preached from “Why halt ye between two opinions.” From the first the venture met with success, but also encountered many difficulties, among others an attempt to unlawfully lock the infant church out of the room for which they had paid. This, however, turned out rather for the furtherance of the cause. The rumour got abroad that the Primitives were to be locked out on the next Sabbath, and no little interest was roused.

Sunday came and saw the Primitives “out,” but not “locked out.” They conducted their open-air service as usual and the light shone brightly from the open school. Mr. Homewood had taken the precaution of consulting the Connexional solicitor, and being sure of his rights, had opened the barred door with hammer and chisel.

In 1877 the society was able to remove from the cramped conditions in Stanley Road to Bromley Common. Through the foresight of Mr. Homewood the present prominent site was secured, which he held until such time as the trustees were able to take it over. In the year just named a school-chapel to seat 160 was built and opened by the Rev. E. Jackson, who preached from “Hitherto hath the Lord helped us.”

These premises, consisting only of a chapel and two small vestries, though undoubtedly a great advance on the hired room, were very inadequate for the manifold work of the growing church. They had to do service, however, for thirty years. So long, in fact, did the portion of the site for the “new church” stand vacant, that many became sceptical of ever seeing the Primitives build. Not so the little band of workers. At the building of the school in 1877 the Rev. J. Philips had said at the public meeting “the Primitives are like rats in one sense, once they get into a place you cannot get them out again.” Hope and determination grew; ‘’ the debt gradually diminished; the neighbourhood rapidly developed with a working class population, so that the need for a large and more suitable building became manifest to all.

With the advent of Rev. T. H. Bickerton, who took in the situation at once, the work began in real earnest. The plans of a striking new church were got out, and with the signs of a tangible scheme, public sympathy was at once evoked. Mr. W. Green, a Congregationalist, promised not only substantial help but gave his full commendation. The Free Churches rallied and joined with our people in holding a bazaar. So that although Mr. Bickerton was not able to see the chapel built, he was in a position to announce, on his vacating the superintendency, gifts and promises of about £900. for the NewBuilding Fund.

The Rev. J. T. Taylor his successor, entered heartily into the work and was enabled to carry it to a successful issue. He was assisted by a noble band of workers, Mr. James Gledhill, so well known in association with St George’s Hall, removed to Bromley, and became treasurer of the New Building Fund. His lamented and unexpected death robbed the church of a splendid worker and generous giver. Mr. Homewood had the great satisfaction of seeing the church built before he was called higher. His last service was to act as clerk of works.

This block of compact buildings stands on the main road from London to Hastings, a monument of sacrifice and devotion. It is a beautiful church, in fact one of the most beautiful and most pleasantly situated in the Connexion. It was a bold venture for the small band of people, not rich in this world’s goods, to undertake an expenditure of £4,000. Their courage has been well rewarded. Others seeing their faith and good works came to their help. The assistance of the Church Extension Fund Committee must be mentioned. Without their valuable aid during the years of strain, the burden would have been too great for the local church. With the more commodious buildings the work is extending. The Sunday school and church are quietly growing and prospects for the future are bright.

The opening of our cause at Orpington might be added as a new chapter to the romance of our church, with features all its own. Orpington is a large village five miles from Bromley, seventeen from London, of which it is fast becoming a residential suburb, beautifully situated in the lower reaches of gently rolling Kent fruit land, amid fields of strawberry, loganberry and apple orchards.

For twenty years Methodist families coming to the village were compelled to unite with other churches. A growing desire, as a fire in the bones, for an atmosphere and method to meet an existing and neglected opportunity, at length manifested itself. During Mr. Bickerton’s ministry a mission was contemplated and a site promised by Mr. Vinson, but owing to his sudden death the promise was not legally secure and the project fell through.

Nothing was done until 1908. This time, however, the initiative came not from the Circuit but from the new society. Instead of our laying siege to the “city,” the “city’s” representatives knocked at our door and asked to be annexed. The annexation was not to take place without encountering difficulties. Opposition came from an unexpected quarter. The Free Church Council objected to the proposal on the plea of overlapping. The situation thus created was in the nature of a “crisis” and required most careful handling.

Here was a new society of Methodists, which we had taken no steps to form, asking to be taken under our wing, failing our consent, determined to begin a nondescript mission. Who then had the right to say we must turn a deaf ear to their appeals? The minister, Rev. J.T. Taylor and the Quarterly Meeting felt that they could not, but replied that if a society were formed and land secured for a chapel, they would make it part of the Circuit.

The new society hailed the decision with joy and set to work with renewed energy. Land was secured, and an old iron chapel purchased. But again the wheel was scotched; when the chapel was brought home the local authorities refused to give sanction for its erection. A worse thing might have happened, for the old chapel was sold and a profit of £10 handed to the new building fund. A trust was now formed on our model deed, and in a few weeks a new iron chapel, large, light, and airy stood on the corner plot. It was opened by Rev. J. Ritson.

The society began with about twenty members, and has grown to fifty, the Sunday school of a dozen has grown to seventy. Additional land has been purchased with a view to future requirements, and a large vestry added to meet present needs. It is just two years since the society was formed, and in that time much good work has been accomplished. In fact the growth has been a surprise to all and has effectually silenced those who prophesied failure. The best is yet to be, for with such a band of leaders, devoted, wise, loyal, an early future will see a strong church.

In conclusion, the Circuit, is not a large one, but it does not forget that it has great traditions to uphold, and can best do this by hard persistent work. During the twelve years of its separate existence the following ministers have travelled upon it: Revs. T. Saunders, T.H. Bickerton, J.T.Taylor. and W. Curry, the present minister, with whom is labouring Rev. A. Johnson as supernumerary. For several years a lay agent was employed and Messrs. A. E. Marland, J. Place and J.T.  Bean served in this capacity. Capable stewards have served the Circuit in Messrs. G. Price, F. W. Barker and Adam Lee, JP. The staff of local preachers has been able and willing.

Each society has a fine opportunity for good and successful work, and if only each church will remain united in heart and loyal to Jesus Christ all obstacles will be overcome.