Report in the 1907 Magazine 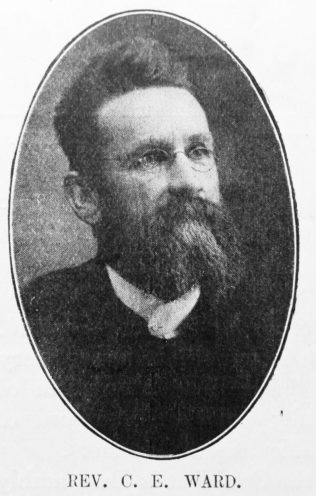 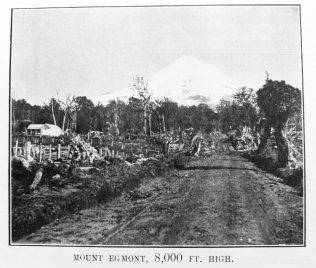 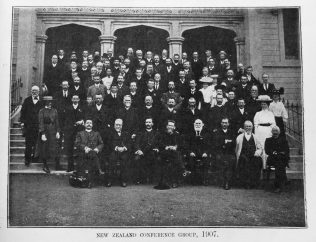 Transcription of Article in the Primitive Methodist Magazine by James Cocker

The Conference this year was held in New Plymouth, one of the oldest towns in the colony. In 1840 the “William Bryant” sailed from Plymouth, England, and on March 31, 1841, arrived at New Plymouth having on board 64 adult emigrants and 70 children. These colonists were sent out by a joint stock association denominated the New Plymouth Company from a town celebrated in the early colonisation of Massachusetts, and the Earl of Devon was Governor of the company. Here we have the origin of the name of the town and also the main street.

The average New Plymouthite has a pardonable pride in his native town. Sixty-six years ago settlement had scarcely begun, the land was in its native state and the Maori roamed at his will; to-day it is one of the leading towns in the colony.

It is pleasantly situated: to the west rolls that part of the Pacific known as the Tasman Sea. To the south some 20 miles distant stands Mount Egmont, its snow capped peak rising 8,000 feet and often piercing the clouds. North and east are the rolling downs of Taranaki with hundreds of homesteads, the farms well stocked and making the province famed for its products. It is a land flowing with milk and noted for its butter and cheese. It has well been termed “the garden of New Zealand.”

On Wednesday, January 9, the Annual Meeting of the Friendly Society was held and the necessary business was transacted.

In the evening the Rev. T.H. Lyon G.C.D., preached the Conference Sermon. His subject was “The Exaltation of Christ;” the sermon was inspiring and prepared the way for the Communion Service which followed.

On Thursday morning the Conference was opened. For the position of President the Revs. C.E. Ward, J. Nixon, J. Olphat, G.H. Mann, and S. Henderson were nominated, but the four last named retired and the Rev. C.E. Ward was unanimously elected.

The new President is the son of the Rev. Robert Ward, the first Primitive Methodist missionary to this land, and has the unique distinction of being the first Primitive Methodist minister’s son born in New Zealand. His father’s name is fragrant in the memory of thousands in this land as a holy man of God who faithfully preached the word of truth in face of difficulties and dangers.

The name of the President is inseparably connected with New Plymouth. There his father, as the pioneer missionary of our church, “preached his first sermon, and built the first Connexional church, and in that town on January 24th, 1846, the future President of the Conference was born. Thirteen years ago when the Jubilee Conference was held in New Plymouth he was elected President, and again has he been unanimously elected to the “Presidential Chair. He was President when the annual gathering was known as a District Meeting, hence, he has three times occupied the highest position in the power of the Conference to confer upon one of its members. This we think is a record in the history of our church in the colony.

The new President entered our ministry in New South Wales in 1870. After seven years of service in Australia he came to New Zealand in the year 1877, and for thirty years has laboured in the colony.

On all his circuits he has rendered splendid service to the church. He is a hard worker, and gives his labours and attentions unreservedly to his church. He is a pastor and visits his people, thus keeping in touch with them. He possesses the “saving sense” of humour, and his speeches and lectures sparkle with spontaneous wit, and frequently in his sermons there are flashes of humour which give them added interest. As a preacher he excels. He is an able preacher of Christ’s gospel. He preaches strong, thoughtful sermons. He has read widely as his lectures on “Astronomy,” “Ant Life,” “Natural History,” “Shakespeare,” &c., abundantly prove, and his sermons are enriched by thoughts gathered in the field of literature. His strong brainy sermons impress themselves upon the minds of his hearers and linger with them for years.

He is loyal to his church and many persons in the colony will rejoice at his election, and we trust that he will be sustained by their prayers.

Mr. J. Huffey was elected Vice-President, and Rev. B. Dudley, Secretary of Conference. The various Committees were elected. After which the Rev. T.A. Pybus, delegate to the last English Conference, gave an interesting report of the proceedings.

The various reports were of an encouraging nature.

The following are the—

It was decided to agree to the transfer of the Rev. R. Hall, to England, and to accept the Rev. A. Harding as an exchange. It was also settled that the Rev. W. Laycock, one of our most successful ministers, should, at his wish, be allowed to return to England in March, 1908, and the Rev. W. Roberts of Ealing, is to be received as an exchange.

Considerable disappointment has been experienced owing to the delay of the Rev. J. Flanagan’s visit to New Zealand, but we are hoping that everything now has been satisfactorily arranged, and that he will in a few months visit this land. The invitation was repeated with considerable enthusiasm. We believe that a visit would do our Church much good, and we trust Mr. Flanagan would reap considerable physical benefit from it.

A new and important step was taken in the formation of the five districts for the better working of the church in the colony. The district meeting will be held about the end of October, or early in November.

Mr. H. Holland, a highly respected local preacher of the Christchurch station, was appointed delegate to the English Conference.

Stationing occupied a whole day. We are short of several good men, men of ability, and who are not afraid of hard work.

The public meetings were well attended and were marked by deep spirituality and considerable enthusiasm; one of the most interesting being the ordination service when the Revs. S. Bailey, D. Campbell, R.J. Liddle, and J. Benney, were set apart for the full work of the ministry, the charge to the Church being delivered by the Rev. E. Drake, and that to the Candidates by the Rev. W. Laycock.

The Conference was brotherly and hopeful, and a progressive spirit was manifested in all the discussions.