Report in the 1910 Magazine 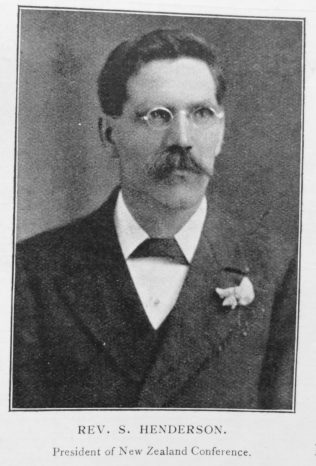 THE Conference this year was held in Tiniam, a town in the province of Canterbury, in the South Island, and a seaport town. It has increased considerably during recent years and has attained a somewhat important position in the province.

The Conference met on Thursday, January 13, and after being duly constituted proceeded to elect a President. The Rev. S. Henderson was unanimously elected to the position. The new President is a product of Belfast Primitive Methodism, having been a scholar in the Sunday School, converted in the Church, and became a local preacher in connection with our cause in Belfast. After labouring in the Pembroke Dock Circuit as a hired local preacher, he was appointed assistant to the Rev. Thomas Jackson on the Clapton Mission. In 1894 he commenced work in New Zealand and on all his circuits he has done solid, substantial and lasting work, and left amongst the people a deep respect for his manly character.

Mr. R.B. Horsley, the Vice-President, is a Manxman, and hails from Ballashalaged, near Ramsey. He has done good work for our Church in the Dominion, for several years being in the active ministry, and since resigning has become a successful merchant.

A welcome was given to the five ministers who had arrived in the Dominion during the year, each of them sent out by the English authorities. Their names are:—Revs. G. Knowles Smith, E. Bandy, J.B. Suckling, H. Cottom, and A.H. Fowles. The first three have been stationed upon the Dunedin Circuit. The Rev. G. Knowles Smith comes to us in the fullness of his powers and we believe he will find a sphere of considerable usefulness in the Dominion. In addition to the above, two young Colonials—Mr. A. Harris, son of the Rev. W. Harris, and Mr. H. Sharp—were received on probation.

Considerable attention was given to missionary matters. Want of funds limits our efforts in aggressive work. The missionary income amounted to 3s. 7½d. per member, and an attempt is to be made to raise a larger amount this year so that new centres may be missioned. A Colonial effort is to be made during the month of May, and a gold medal is to be given to the one who collects the highest amount. A second effort is to be made about the month of September, and a gold medal will be given to the highest collector in each of the five districts. Ten per cent. of the income is to be earmarked for aggressive work.

We report an increase of 170 members and 387 scholars. The membership now stands at 3,164, and the English Conference is to be asked to grant increased representation to the Dominion on the English Committees.

The necessary sum of money was sent to England to support Minnie Barker in the Connexional Orphanage.

The New. Zealand .Superannuated Ministers Widows and Orphans Fund now stands at £4,196. This is a fund which is intended to supplement the English fund.

It was with deep regret that the Conference granted the application of  the Rev. C. E. Ward for superannuation. He is 64 years of age, and is the son of the Rev. Robert Ward, our pioneer missionary. For forty years he has lived a strenuous life and his work in our Church in New Zealand will be long remembered. As the representative of the Preachers’ Friendly Society he is to be an ex-officio member of the New Zealand Conference.

The Rev. J. Dawson was left without pastoral charge, so that he could devote his time to the work of organising secretary of the New Zealand Alliance.

This year there was a ballot for the position of delegate to the English Conference. Two of our senior ministers are visiting the Homeland—the Revs. W.S. Potter and the Rev. James Guy. Both have done good work for the Church. Mr. Potter entered the ministry in New Zealand 34 years ago and has been a leading figure in our Church for many years. Seventeen years of his ministry have been spent in the city of his boyhood, and twice has he been elected President of Conference when the gathering has been held in Auckland, his native city. In addition he has been Colonial editor, Jubilee lecturer and organiser. In many ways he served his Church, and he now seeks a well-merited holiday.

The Rev. James Guy is also visiting the Homeland. He bears a name honoured in Primitive Methodism. His father was a co-worker with the founders of the Connexion. His brother, the Rev. John Guy, recently retired from the active work of the ministry. Thirty-two years ago Mr. Guy responded to the call for workers in New Zealand and left his native land to serve the Church in this land beneath the Southern Cross. He is held in high esteem by his brethren. Twice he has occupied the presidential chair. He was joint author of “Fifty years of Primitive Methodism in New Zealand”

The Conference appointed the Rev. W.S. Potter delegate to the Conference; and Mr. Robinson, one of our New Zealand laymen, as lay delegate.

The Conference is to be asked to give Mr. Guy a seat.

The Rev. S. Horton and Mr. F.A. Holmes were appointed vices and also the New Zealand representatives on the English Committees.

The Conference decided to unite with other Churches in inviting Dr. Wilbur Chapman to visit New Zealand to conduct an evangelistic mission in 1911.

The “New Zealand Primitive Methodist,” the monthly organ for the Dominion, has had a successful year. It was decided to materially enlarge it, and the Rev. J. Cocker was appointed editor for a seventh year.

The open-air gatherings and the usual public meetings were of a very successful nature.

The Conference sermon, which was a thoughtful and able utterance, was delivered by the Rev. B. Dudley, G.C.D.

The Revs. H. Daniel, A. Armstrong, and H. White were ordained, the Rev. J. Cocker delivering the ordination charge, and the Rev. S. Henderson delivered the charge to the church.

The Rev. R. Raine delivered the retiring President’s address, which was of a practical nature.

Much business of a very useful nature was done by the Conference.

Whilst conference was sitting, copies of the “History of Methodism,” presented by Sir W. P. Hartley, arrived, and the gift was greatly appreciated by the ministerial recipients.