You are here: HomenextPlacesnextNorfolknextPrimitive Methodists in Swaffham 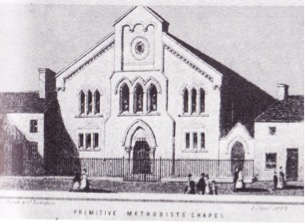 zoom
Drawing of the Swaffham Primitive Methodist Chapel in 1877

The town was first missioned by William Green Belham, travelling preacher at Mattishall. A society was formed despite troublesome opposition and in 1836 became head of a circuit. Numbers fell to a low level and only slowly grew again.

The Norfolk News reported on 4 April 1849 that ‘the quietude of this town was disturbed…by an attempt to supress the field preaching’ by Rev. Henry Alderslade who had been ‘addressing a large and attentive assembly in the market place.’ Two policemen were instructed to arrest the preacher and he was taken before a magistrate, the Rev. W. Woodhouse, who forbad him to preach in the open again. Henry Alderslade refused to agree and indicated he would again preach in the same place before long.

The Primitive Methodists met first in a barn in Lynn Road and then a meeting house originally consisting of two old cottages. In 1849 a chapel was built with 295 sittings. Here on 3 May 1852 the first Primitive Methodist African Missionary meeting took place. A schoolroom was built at the rear in 1853.

In 1936 the chapel was closed, the congregation was united with the Wesleyans and the Primitive Methodist building was sold. It was finally demolished in 1966.