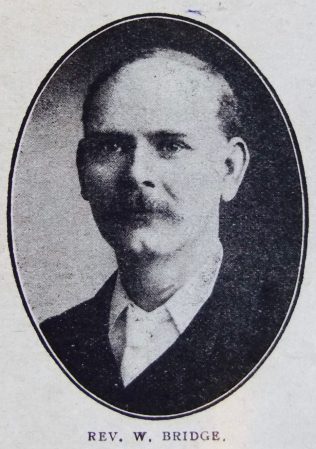 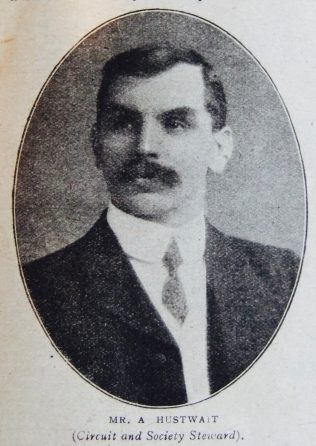 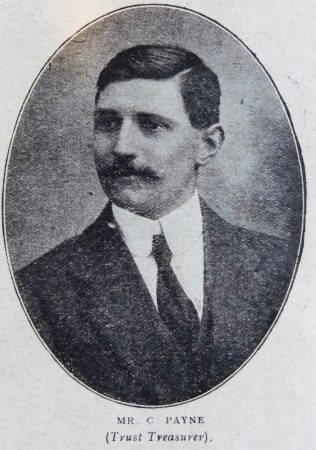 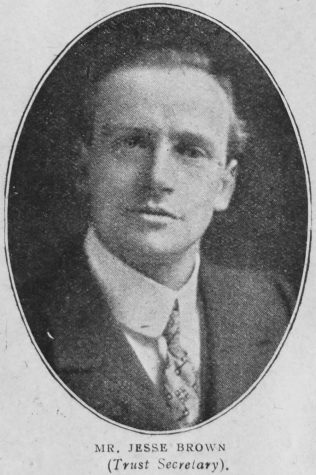 Transcription of Article in the Christian Messenger by Rev. W. Bridge

The beginnings of Primitive Methodism in Wellingborough date back to 1839, when four members were reported “on trial.” Its hold, however, was very insecure. The church never reported more than seventeen members, and when the number had fallen to five in 1844, the society was allowed to lapse. During this period the quarterly income never reached £1 and the last quarter it was only 3s. 3½d.

A more enduring foundation was laid in March 1869, when the Rev. George Doe, the superintendent minister of Northampton Circuit, persuaded the quarterly meeting to re-mission the town. Consequently on Sunday, April 25th, the Rev. George Windram, Mr. Doe’s colleague, together with Mr. Trusler – now the Rev. George Trusler – and others left Northampton at five o’clock in the morning, walked the ten miles to Wellingborough, where they arrived between eight and nine o’clock, and forthwith commenced work in the open-air. During the day services were conducted in various parts of the town and in the evening, Mr. Windram preached to a crowded congregation in the old Town Hall. At the close of the prayer meeting a number of members were enrolled and the first society class constituted.

For several months services continued to be held in the open-air, and in cottages and in the Town Hall, but at the end of the summer an old Congregational Chapel was rented from the Trustees and regular services commenced therein. This building is probably almost unique in Primitive Methodism. It was erected in 1791, on the site of a chapel erected in 1734, and in all probability parts of the original chapel are incorporated into the present one. The church originally worshipping here was formed in October, 1691, and there are several memorial tablets in the church to various Congregational Ministers who have served as pastors through long numbers of years, its first minister, the Rev. R. Beetson, for thirty-three years, and his successor, the Rev. W. Grant, for the long period of forty-eight years.

While still rented from the Congregational Trustees, during the ministry of the Rev. R Ducker, the interior of the church was entirely renovated, the old box pews being taken out and replaced by seats with open backs. The old pulpit was taken down, and a rostrum erected. Two galleries were taken out and the remaining one reseated.

The church was purchased and reseated in 1882, during the ministry of the Rev. J. Evans, at a cost of over £400, Further renovations and alterations were made in 1900, during the ministry of the Rev. E Devenish, at a cost of over £300. The jubilee of the Church was held in 1919 when the special preachers were the Rev. J. Watkins, President of Conference and the Rev. G. Trusler one of the original missioners. A Thanksgiving Fund was raised by which the whole of the remaining debt of £100 was paid off.

A Sunday- school was established in 1870, and to-day the church’s young life is probably not only its most hopeful, but its most conspicuous aspect. The building has all the disadvantages inevitably attaching to age, it is in a “down town” district, many of its members live a fair distance away, but the love of many for the old place amounts to almost a passion, and this is no less true of its young people than of the older members of the church. The one regret is the lack of sufficient and suitable accommodation to meet the modern demands of an increasing Sunday-school, and in some way or other the problem will soon have to be seriously faced. Old as the building is, it is compact and comfortable, and given a much needed renovation, and increased Sunday-school accommodation, it still has great possibilities of service before it for many years. Its seating capacity of two hundred-and-fifty is always fairly fully occupied on Sunday evenings; it has two hundred scholars and teachers in its Sunday-school, good C.E. Societies, both junior and senior, a live Girls’ Guild, and a very large and successful Women’s Own, with which is associated a Ladies‘ Missionary Auxiliary. Its choir is a valuable asset and its service of praise is characterised by great warmth and heartiness. Visiting preachers and worshippers frequently express their pleasure in the singing.

The officials of, the church are devoted to its interests, but would be none the worse for a little more of the spirit of daring and adventure – the adventures of faith – which should never be wholly absent from the Church of Christ. Mr. A. Hustwait has faithfully served as Society Steward for fifteen years and Circuit Steward for seven. For a number of years Mr. Jesse Brown served as Church Secretary. Mr. G. Bean, a new comer to office and one of our own boys, has recently been appointed to succeed him and is doing his work exceedingly well. Mr. C. Payne makes an efficient Treasurer. Mr. C. Smith has served the church with great devotion as Chapel Steward for a number of years. In Mr. R.W. Wilson, the Sunday-school has an earnest Superintendent, and in Mr. A. Parrott, and Mr. G. Porter, an equally devoted Secretary and Treasurer respectively, all of whom are supported by a zealous band of teachers. The Choir is ably served under the Leadership of Mr. P. Lambert, whose efficient colleagues at the organ are Misses E. Wilson and E. Brown. The President of the Young People’s Institute is Mr. H. Clouting, of the Senior C.E., Rev. W. Bridge, and of the Junior C.E., Miss L. Fryer. Mrs. Payne is President of the Girls’ Guild. Mrs. Bridge is the President of the very ?ourishing Women’s Own. In contrast with the long pastorates of its former Congregational ministers, the present minister’s engagement for a fifth year constitutes a record.

Early in 1920, the Trustees and Chapel Committee was enlarged by the formation of a Church Council representative of each section of the Church, a change, which, if faithfully worked, promises great possibilities for increased efficiency in the working of the Church. The envelope system was introduced into the Church two years ago with most beneficial results. Its complete adoption throughout the Church and Circuit would go far to solve increasing financial claims. Recently a Memorial Tablet was unveiled by the Rev. R.J. Fenwick, to the men belonging to the church who have fallen in the war.

Besides the mother church, there are three other Societies, the oldest of which is Raunds, which, as the Raunds Mission, had an independent existence before it became a part of the Northampton Circuit in association with Wellingborough. In 1876, Wellingborough and Raunds Mission separated from the parent circuit with twelve other societies and a quarterly income of £26. Raunds has been faithfully served for some years by Mr. J. Tanner as Society Steward, Class Leader, Sunday-school Superintendent and Organist. Mr. J. Peck has been Treasurer for a number of years, and Mr. W. Parker renders efficient service as Church Secretary and Sunday-school Treasurer. In common with other churches Raunds has suffered from the war, especially in the death of its Assistant Sunday-school Superintendent, Mr. W. Payne. But prospects are improving and better days are confidently anticipated.

Irchester is our smallest village church, where conditions have been difficult for years, but here also, the outlook has distinctly improved of late. Mr. J. Goosey has rendered devoted service for many years as Society Steward and Sunday-school Superintendent, assisted by Mrs. Stokes as Class Leader and Church Treasurer. Recently steps have been taken for the systematic visitation of the neighbouring streets and increased congregations are already the result.

In Rushden we have a church situated in a thriving town of some fifteen thousand people, in which the Free Churches are strong and yet our Church never seems to have really struck root. There has been for years a somewhat heavy debt on the building, but recently, in common with both Wellingborough and Irchester, this church, too, has had the joy of paying off its debt. This debt has probably militated somewhat against the success of the church, but other causes of failure within the church itself, have not been wholly absent. During long years devoted service has been rendered by Mr. I. Twelftree as Society Steward and Sunday-school Superintendent and Treasurer, also by Mr. J. Paragreen as Church and Sunday-school Secretary, and by Mr. T. Robinson as Church Treasurer. Despite the removal of its debt there is still room for improvement.

With its one hundred-and-ninety members, the circuit finds great difficulty in meeting its greatly increased financial responsibilities, and very reluctantly, it has decided to seek help from the Sustentation Fund.

The possibilities of development in the circuit are somewhat questionable save at Wellingborough, and here the prospects are gravely restricted by the almost impossible cost of building. But to clear vision, wise statesmanship, and faith in God, difficult things are not impossible things, and given these, we may confidently believe that the best is yet to be.

The Methodist spirit is strong in Wellingborough. There is a love of evangelical truth and a great delight in the evangelistic atmosphere. This creates fellowship and the love of communion. The old and young are inspired by the same feelings. There is complete accord of spiritual objective and experience, in the eagerness to hear the word and in the evident joy of fellowship, It is a great delight to minister to the people. There are great days ahead for our people. To faith there is always a future.