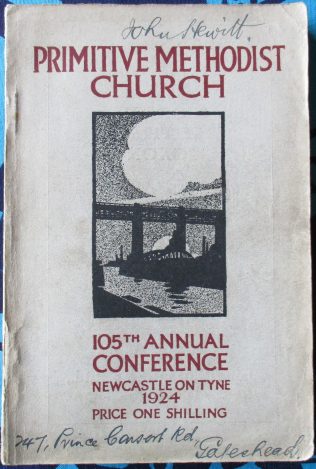 …….. Probably the First Primitive Methodists in Newcastle were two Staffordshire men who had come North to work in a pottery: they had had association with Bourne and Clowes in Tunstall.

On August 1st 1821, John Branfoot preached on the Sandhill near the Quayside and in the autumn of the same year William Clowes preached at Ballast Hills and there the first Newcastle society was formed and included in the North Shields circuit.  Indication of the rapid progress of our Zion and the holy hustle of our fathers is found in the fact that two years later in 1823, Newcastle was made into a “three man” circuit.

From the time of our early stalwarts first worshipping in Butchers Hall in the Friars, proceeding to an old Presbyterian chapel in Sallyport, then to Silver Street, and later to Nelson Street – where Clowes laid the foundation stone in 1837 – marks a period of stupendous work , mighty  success and much soul winning.

Of Nelson Street so much could be said, so many names mentioned, peradventure humble, but which glowed as great lights worthily elevated.  But it is not all written in the late Mr. W.M. Patterson’s history of “Northern Primitive Methodism.”

Of such type was W.B. Leighton, who commenced our Sunday School at Ballast Hills and continued  as its Superintendent for 59 years, seeing it grow until it had 500 scholars and 60 teachers.  From that school came Hugh Gilmore to enrich the personnel of our ministry in England and Australia.  The name of Leighton is suitably preserved in the memorial chapel that stands as the head of Newcastle Third Circuit.

Reverting to Nelson Street, we cannot forbear the mention of Robert Foster, an ex-vice-president, and John Hewitson of Orphanage fame, as worthy of special mention in the last half century, standing as they did for so much in local service and Connexional influence before they were gathered full of years and good works.

Great names of our ministry are connected with Nelson Street church, as indeed with all of the five Newcastle and Gateshead circuits associated in the present conference arrangements.  Of those who have “travelled” in those five circuits and occupied the Presidential chair, or come to other well deserved Connexional fame, a very lengthy list might be quoted.  But one ministry, commencing at Nelson Street and passing on to Central church when it was opened, October 4th 1899 must be named.

The Superintendency of the late Rev. A.T. Guttery D.D., cannot be forgotten in Newcastle Methodism, no matter how many Unions come.  Of  his many gifts space almost forbids the mere recital.  His tactfulness, his energy, his business ability, his genius for friendship, his platform distinction with its wit, humour and pathos, his sickroom benedictions – great as they were – all paled beside his unique budget power, his exquisite facility, scholarly and pronounced passion in presenting the word that liberates and saves.

For thirteen years he was known nationally as “Guttery of Newcastle”, years that found him in the full bloom and first fruit of his prime, splendid in his strength, powerful in his prayer, convincing in his arguments, melting in his exhortations, consuming in his condemnations, but mighty in his mercies; unstintingly and ungrudgingly wearing out his big heart in the cause of the Christ, the people and the church he loved so well.

It may be expected that as we meet in the church he built twenty-five years ago, and where his voice was more heard than in any other building, we will with profit remember all that he stood for,  and all that he gave to Primitive Methodism.

At this Conference you programme will include a morning outdoor service on the Quayside and an afternoon Camp meeting on the town Moor.  Traditionally it were well so, we shall be on Holy Ground, reminding us of days when we largely a church without a temple and of the gain our Tyneside district has received from the open-air preaching of the Word.

Of the power of such you will find, on another page, a peculiarly beautiful description of a characteristic local camp meeting from one who may truly be named an unprejudiced witness.

In these later days, when a Labour political party, for the first time in English history, finds itself strong enough to form a Government, it is interesting to record that some of the earliest workmen members of Parliament were Charles Fenwick, resident in Newcastle and John Johnson, member for Gateshead; whilst John Wilson and J.W. Taylor represented Durham and Chester-le-Street in the House of Commons.  All these preached with us as “locals.”

Of Gateshead, where some of you will temporarily reside, a tale could be told of much struggle and disappointment in early Primitive Methodism, but grace has won through and after much achievement in soul winning and the making of great men we have today two strong circuits comprising 18 churches, 9 of which are in the confines of the Borough, each circuit having over 700 members, which with the three circuits in Newcastle make a total of over 3,000 membership.

The two towns are connected by four bridges, with talk of a fifth; indeed a movement is mooted to amalgamate the two towns, when the Gateshead population of 124,514 would be added to the 278,000 in Newcastle.

Dare we invite your attention to our architecture?   St Nicholas Cathedral church we have already named and we also have a Roman Catholic Cathedral in St. Mary’s, head of the R.C. Diocese of Hexham and Newcastle.  Two old churches, St Andrew’s in the Gallowgate dates back into the twelfth century, and St John’s near the station, not much later.  Our nonconformist churches considerably contribute to the beauty of our buildings, whilst Grainger Street (named after the builder) and Grey Street (named after the Parliament Reformer of 1832) rank as two of the finest thoroughfares in England.  The municipal picture galleries, the “Laing” in Newcastle and the “Shipley” in Gateshead, whilst quite recent are doing their work of  pleasing the eye and cultivating correct taste in matters artistic.

Our beauty spots and show places round about are worthy of your attention.  Our rock girt coast interspersed with beautiful sands; Durham with its stately Cathedral and Castle, and its view from Prebends Bridge perhaps unsurpassed by anything in Europe; Hexham with its ancient Abbey and delightful river scenery; and the Roman Wall wending its way o’er hill and dale, over some of the wildest scenery in England, from sea to sea, provide delightful places for the tired town dweller, whilst Jesmond Dene (Jesu’s Mount) within the borders of our city is justly famed for its sylvan beauty.

Within a few hundred yards to the north-west of the Conference church stands “Armstrong” the largest college of the University of Durham: a stone throw to the east of Central church is the College of Medicine of the same University, institutions through which an ever increasing number of our church young people are graduating in the different faculties.

We have had somewhat to say of the giants among our ministers and laymen in a day that is past – and rightly so – but our present day equipment of what matters most, men and women, is certain and promising; many stalwarts are with us in the fullness of strength, conviction, ability and enthusiasm quite equal to the emergency of our day; and come what may in the way of change, a generation of youth is in our midst that should be well able to advance the Eternal Gospel for which we stand, and to apply its unchanging saving principles to all our changing conditions.