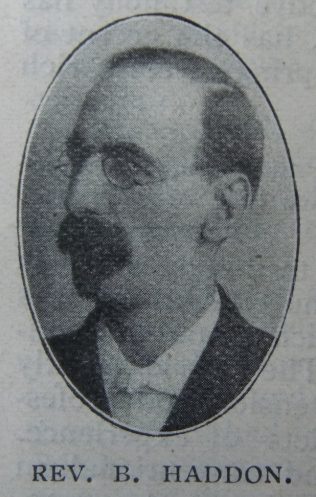 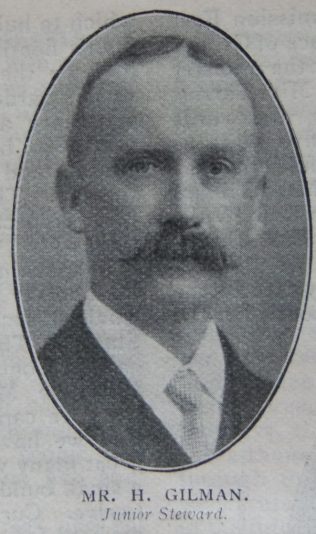 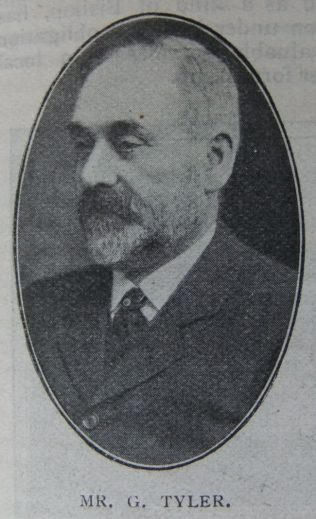 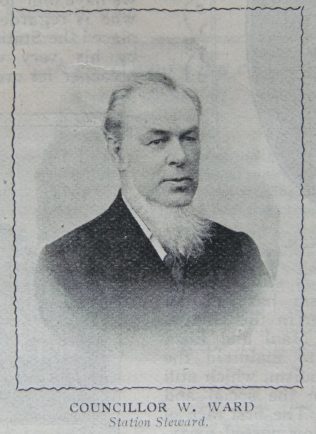 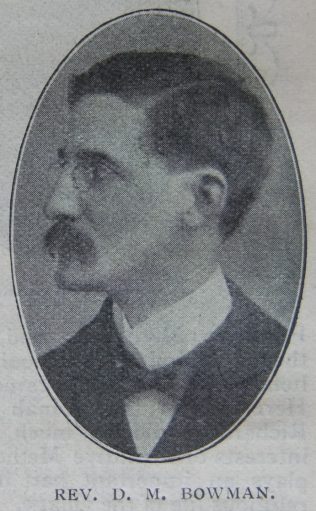 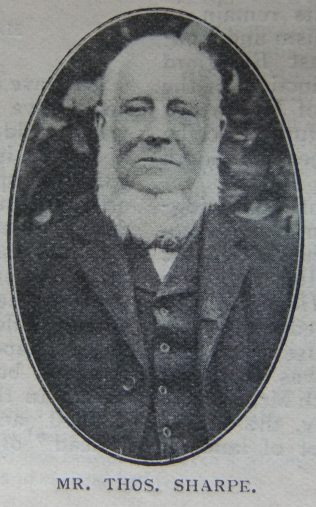 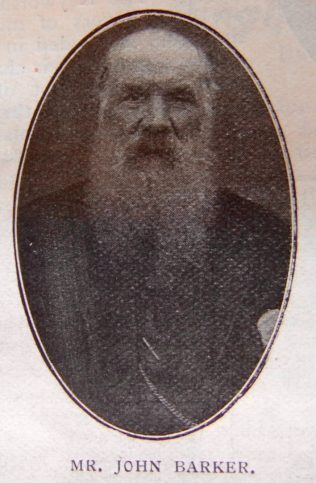 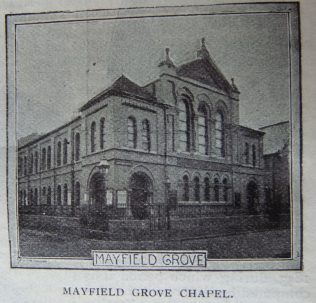 Transcription of article in the Christian Messenger by Rev. B Haddon

Nottingham Fourth Station dates from the year 1883, having been at that time formed from Nottingham First. Since then the Fourth Station may claim to have played a distinctive and useful part in the life and labour of Primitive Methodism in Nottingham and District. At its formation the Station consisted of seven places, but the name of Saxondale has since disappeared from the plan. Saxondale is a small hamlet where preaching services were held in a cottage for a considerable number of years; but gradually, and from a number of causes, the interest diminished and the place was ultimately closed, and all subsequent efforts to resuscitate the cause have failed. Now, the fate of this cause, small as it was indicates a serious problem, some solution of which must be found. Primitive Methodism has enjoyed a great reputation for devotion and fidelity to the villages; but, consistent with the trend of the times, a reaction has set in in favour of towns and cities, and that to the neglect of the villages. On the one hand, many of these villages have become so depopulated that the small remnant find it almost impossible to maintain what is often the only Nonconformist cause in their midst; and, on the other hand, there is a growing reluctance on the part of those in towns to make sacrifices to serve the villages in their weakness. We trust that in our Centenary proposals the villages will not be forgotten, and that, too, in the best interests of the large centres of population. We need a revival of the old Methodist passion for the villages, for unless something is speedily and definitely done we fear that many other villages and small interests will share the fate of Saxondale.

But if Nottingham Fourth has lost Saxondale it has also succeeded in building up a thriving society at Radcliffe Street in Nottingham. This society, which is an outgrowth of Mayfield Grove society and dates from 1887, has experienced very considerable success and has proved a useful accession to the station. According to the Quarterly Meeting Minute, September, 1887, Brothers Tyler, Cooper, barlow, and Williamson were appointed as a managing committee of this new cause, and on its first appearance in the station’s statistical account we find it had fafty-two members and sent £5 10s to the quarterly meeting. Since then there has been a steady growth and to-day we have a society of 100 members, a strong band of officials, and the quarterly return is £10 5s. Our Radcliffe Street people continue to worship in a good-sized iron building which was originally purchased from the Baptists at a cost of £950, but with substantial alterations and additions the cost has amounted to £1,500. However, the debt has now been reduced to £600, and the members are eager for better accommodation. For this purpose a new site has been secured in the neighbourhood, and it is expected that in the near future a suitable building will be erected thereon. We believe there are great possibilities in this society and we predict for it considerable progress.

Ruddington is a much older society. We find reference to it in the new history of Primitive Methodism as the death-place of John Briggs, a permanent member of the Conference in 1856, and where, it is added, “his services greatly conduced to the preservation and extension of our Connexional interests at a most critical crisis in their history in that village.” At Ruddington we know have a large chapel and a membership of seventy. Six years ago, during the superintendency of Rev T. Buttrick, a beautiful schoolroom was built and paid for. Two years ago the chapel was re-decorated and re-heated and it never looked better than at present. On January 19th of this year a new organ was installed in the chapel, and by the generosity of Mr. Carnegie the total cost of £230 has been defrayed. In December of last year we experienced a gracious revival during a mission conducted by Miss Smith, of Leeds, and the society is now in a healthy and prosperous condition. Thomas Sharpe, the oldest local preacher on the Nottingham Fourth Station, lives at Ruddington. Mr. Sharpe is eighty-six years of age and has been associated with Primitive Methodism for the last seventy years. He has identified with the Ruddington cause since 1841. He has been a local preacher since 1843, during which period it is computed he has travelled something like 18,000 miles. Brother Sharpe still holds the place of class leader and occasionally occupies the pulpit. It is very pleasant, and sometimes pathetic, to hear him speak of the old preachers and the “old times.” Yet, whatever his reverence for the past, he is loyal to and deeply interested in the cause at present. We thank God for all our brother’s past services and we pray for him a bright eventide.

Keyworth is another of our village societies, but of a type very different from that of Ruddington. We know very few villages of a more decided character than this. The Keyworthite temper is strongly independent and most responsive. From a political standpoint the people are pronouncedly radical, and from the ecclesiastical standpoint the Primitive Methodists may claim to be the predominant partner. We have an exceedingly good chapel and schoolroom, the services are well attended, and the temperance element is particularly strong. The Keyworth friends are great lovers of music and they, too, succeeded in placing a new organ in their chapel two years ago the cost of which was defrayed by their own efforts. Miss Smith also paid a short visit to Keyworth in December of last year and a goodly number of converts was the result.

Perhaps no place in the Nottingham Fourth Station figures more prominently in or Connexional records than does East Bridgford. Speaking of this village Mr. Kendall says: “Sooner or later all Primitive fathers are found there; for Bridgford was just like one of those quiet villages which, because it happens to lie in the line of advance, will have billeted in its farm-houses or cottages the generals of the successive divisions that pass through it, and make it their temporary quarters.” According to the same authority, Sarah Kirkland was the first to mission East Bridgford, which was the birthplace of George Herod, who was converted under the ministry of William Clowes, who married Miss Parrott of the same village, and who afterwards served the Connexion for forty-five years as an energetic and most successful minster. This, too, was the abode of Mr. William Lockwood who, after a brief term in the Wesleyan ministry, built a chapel at East Bridgford. This chapel, still known as “Lockwood’s Chapel,” was subsequently used by the Wesleyans, then it was purchased by the primitive Methodists and is still used by them. Primitive Methodism has had an honourable and useful career in this village. Here it was that Dinah Maul and Eliza Richardson did so much to maintain the interests of Primitive Methodism, which still plays an important part in the social and religious life of the village. The first race of Primitive Methodists has now passed away, but some of their descendants remain to promote the interests of Methodism and Nonconformity in the district. East Bridgford has achieved still another distinction by the fact that it was the birthplace of Mr. Arthur Richardson, M.P., who was returned at the last General Election as member for South Nottingham.

Shelford is a near neighbour of East Bridgford, and there also early Primitive Methodism must have been of a somewhat heroic type. Persecution was most bitter, and here it was than John Vickerstaff, Henry Fukes, and Matthew Woodward suffered such sacrifices and sufferings for the cause which was so dear to them. Here it was that that amusing incident occurred which Mr. Kendall thus describes: “Subsequently, the society not being able to obtain a plot of land on which to build a chapel, purchased the waterman’s floating chapel at Nottingham, swam it down the river Trent, drew it into Woodward’s garden, there fitted up the amphibious sanctuary and worshipped in it.” In the year 1840, however, a freehold site was purchased and a brick building was erected thereon. That chapel is still in use and a most respectable village society is connected therewith.

In speaking of the possible fate of village Methodism we had in mind Newton, the smallest society in the Nottingham Fourth Station. This village is mentioned in our earliest Connexional chronicles, though when Primitive Methodism was first established there we cannot say. It is known, however, that we have been represented there for a great many years. At present we worship in a small building and have a membership of twelve. Curious to say that out of the twelve we have four local preachers. John Barker, who is regarded as a kind of Bishop, has placed the Station under immense obligation by his very valuable services as a local preacher for over forty years.

We have reserved our remarks about Mayfield Grove Society for the last. This society was the child of  Canaan Street Society which, of course, is “mother to us all”; and in a true filial spirit we congratulate the mother on her more recent improvements and developments. What now serves as the lecture hall and schoolroom was the first chapel, and there such a vigorous society so rapidly grew up that the accommodation became too small. Efforts were then made to secure a larger chapel and the present large and commodious building was erected in the year 1882. In the following year the Station was divided and Mayfield Grove became the “head” of the Fourth Station. Such has been the progress made since those days that the Mayfield Grove Society has won a Connexional fame. At one time it was supposed to have the largest Sunday school in Nottingham, and the interests of the young people have always been catered for. Situated in the midst of a thickly populated district this society has had the finest opportunity for development, and in some measure these possibilities have been realized. One of the most distinctive features of Mayfield Grove is the fact that it has had one of the largest P.S.A. Societies in the provinces, an institution which, in many ways, has proved of great service, and is still in a healthy condition. The most recent development in connection with this society has been the opening of an Institute, in which the young people can gather for purposes of recreation and education.

The Station has had its reverses, and not the least serious one was the departure from Nottingham to London of Mr. George Tyler a little while ago. Mr. Tyler had been Station Steward for over twenty-one years, and such was his association with Mayfield Grove Society, and such was his influence throughout the Station, that his leaving was universally felt to be an almost unbearable loss. His successor in that office is Councillor W. Ward, who has as co-steward Mr H. Gilman.

The first superintendent minister of the Fourth Station was the Rev. S.S. Henshaw, the influence of whose service still lives. He has been followed by a series of devoted and useful men, both as superintendents and second preachers. The present ministers are Revs. B. Haddon and D.M. Bowman.

We thank God for the good accomplished through this Station during past years, and we sincerely pray for its continued prosperity in the future.