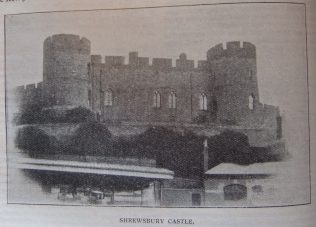 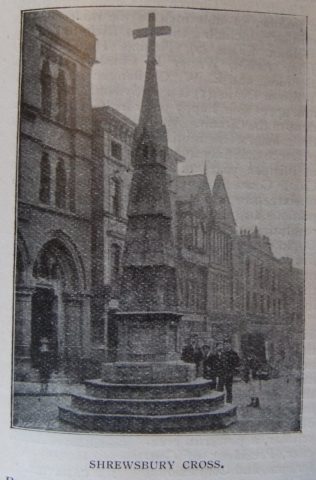 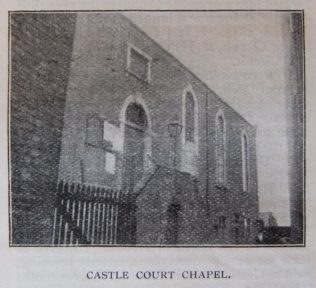 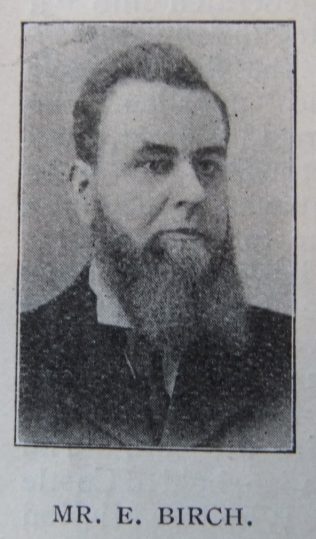 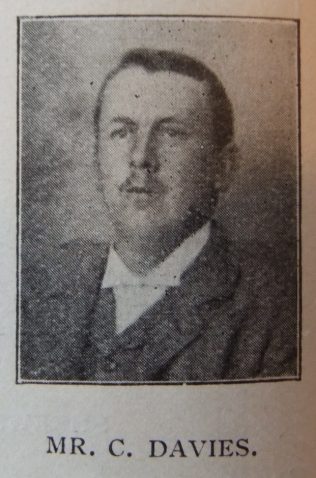 Transcription of Article in the Christian Messenger by Albert A. Birchenough

SHREWSBURY Circuit has an interesting past as well as a hopeful future. In the spring of 1822 this historic county town was visited by the Primitive Methodist missionaries. They were successful in forming a society that has weathered the storms, and is still progressive. On a memorable Sabbath in the following August the Rev. James Bonser preached at the Cross —where the last of the native Welsh princes was beheaded, and where, in 1403, the lifeless body of Hotspur was exhibited after his defeat at the Battle of Shrewsbury. Bonser’s congregation consisted chiefly of the hundreds of harvest men who crowded the streets waiting to be engaged by the Sabbath-desecrating Salopian farmers. Bonser was apprehended and brought before the Mayor. Because he refused not to preach again in the streets of the borough, his worship committed him to the Quarter Sesslons. As Bonser was led by the constables through the main streets of the town, and followed by hundreds of people, he lustily sang:
“Christ, He sits on Zion’s Hill.”
The inhabitants were in a state of wild confusion, and that Sabbath evening special prayer was offered on Bonser’s behalf at the various chapels of the town. At an early hour on the Monday morning no fewer than eight breakfasts were sent to Bonser as he lay in prison. Having been liberated, the same evening he preached to a huge crowd of people, who were greatly interested in seeing and hearing the man who had been imprisoned for preaching the Gospel. In 1824 Bonser withdrew from the ministry, physically weakened through his extraordinary labours. He died on November 23rd, 1828, at the comparatively early age of thirty-two. Castle Court society lovingly remembered their first minister that had been in Shrewsbury prison for conscience’ sake. For six weeks the pulpit was draped with black, and a funeral sermon was preached “in token of respect to his memory.”

The religious work that was developed by Bonser was of a permanent character. As the result of his imprisonment and his preaching at the Shrewsbury Cross, about thirty young people from ten to fifteen years of age decided for Christ and joined the Church. In the year 1824 two of these young females had been “called out” as travelling preachers,” and several others were on the Shrewsbury plan as preachers of the Word. Shrewsbury was made a branch of Oakengates Circuit in the year 1822. In December, 1824 it became a separate Circuit, and was favoured with the powerful superintendency of the Rev. John Ride.

Castle Court Chapel, with its hallowed memories, has a remarkable history. It was purchased at a cost of £850, and was opened for worship in June 1826. The Rev. Dr. Raffles, the famous Liverpool preacher, was invited to preach the dedicatory sermon. Few of our chapel sites have had a more romantic history and undergone greater transformations than old Castle Court Chapel.  At the close of the eighteenth century, where the present chapel stands, the site was occupied by the Shrewsbury “old gaol, or House of Correction.” It stood upon the ancient walls of the borough, and overlooked the beautiful vale of the Severn. It flanked an oblong court that was entered from nearly opposite the Castle grounds. When this old-time prison was sold in 1795, the purchaser transformed a portion of it into a coal depot. Then for some ten years it was a chapel, with the Rev. John Hinners as pastor. In March, 1817, the chapel was bequeathed by Richard Jackson to “his dear aunt, Frances Pinchbeck,” who also willed to James Pinchbeck “my watch, and I request it may be taken care of by him and kept in the family.” If this gentleman were a member of the family that originated the derisive epithet of “ Pinchbeck ” to cheap watches, it lends an additional interest to the romance of Castle Court Chapel. When the property was secured in the spring of 1826 for the use of the Primitive Methodists, the ecclesiastical building had degenerated into “a billiard-room with two vaults underneath.”

In this old-time chapel the fathers gave their marching orders to the “apostles ” who opened Wiltshire, missioned Ireland, and introduced Primitive Methodism into the Principality. Very few quarterly meetings have had a similar honour to Shrewsbury, where English, Welsh and Irish matters have been debated in the same meeting by an assembly with representatives from those distant places. In the year 1824 Shrewsbury sent Samuel Heath a distance of over a hundred miles to open the Wiltshire Mission. The March quarterly meeting of 1826, held at Castle Court, determined “that the Wiltshire Mission become from this day a Circuit of itself; that the places be given up next Lord‘s Day, and that they have their own preachers, viz., Samuel Heath, George Hollowey, Edward Foizey and Margaret Catlin.” It was further decided “that the committee for the Brinkworth Circuit, near Malmesbury, be Joseph Dickson, Cornelius Corry, Thomas Wall and John Letherell.”

Shrewsbury has been prolific in the large number of Circuits that directly and indirectly have been made therefrom. In the late “twenties” and early “thirties” of the nineteenth century Castle Court was the administrative centre for the whole of south-western Shropshire. As Shrewsbury is the natural key of Wales, so Castle Court extended its operations in the border counties of Montgomery and Radnor. For some time Shrewsbury Circuit had a mission at Newtown, where it built a chapel in 1835, and decided that “the committee business for Newtown should be done” at Castle Court. The missionaries visited “the regions beyond,“ and formed churches at Llanidloes and Machynlleth. For some unknown reason these two important Welsh towns were given up. Probably on account of their great distance from Castle Court, the difficulty of supplying them regularly with preachers, and the obstacle caused by the Welsh language being largely spoken and English so little understood by the people generally. In 1832 Shrewsbury made Bishop’s Castle into a Circuit, which has become the  “mother” of the Church Stretton and the Clun Circuits. Hadnall and the societies lying on the Shropshire Plain were formed into a separate Circuit in the year 1838. Minsterley became a branch of Shrewsbury in the year 1844. It has developed into a flourishing Circuit, and is the parent of the Welshpool Circuit.

At a committee held at Castle Court on February 8th, 1832, it was decided that the superintendent minister, the Rev. Thomas Haslam, “should go a-missioning every fortnight to enlarge the Circuit.” As Shropshire and the adjoining counties were fairly covered with Connexional agencies, the following March quarterly meeting decided “that Bro. Haslam go into Ireland as soon as he can after next Monday” As his funds were somewhat low, it was resolved “that Bro. Haslam have  £3 lent to him.” The mission in the north of Ireland prospered to such an extent that the quarterly meeting, held at Castle Court in March, 1836, consented “that Mr. Bickerdike have permission to build a chapel at Belfast.”

Castle Court Church and Circuit have given a number of able men to the ranks of the ministry, including the Revs. Richard Davies, William Evans(2), Thomas Thatcher, Dr. John Askin, Walter B. Cheshire, William Bennion, and E.W. Challenger. The Rev. William Evans (1) is a native of Shrewsbury, and spent four happy years as the superintendent of the Circuit. Without being invidious, the most notable minister that the Circuit has given to the itinerancy was Philip Pugh, who, at thirteen years of age, was converted at Castle Court Sunday School. At the early age of sixteen he, along with four youthful companions, began his eventful public career. The resolutions thereon, copied from the old Minute Book, are refreshing: “That the following five lads,” whose names are given, “be permitted to exhort.” At the next quarterly meeting it was determined “that the notes of the five lads be renewed, and that they be requested not to take texts.” That meeting never dreamt that one of those five lads would become a distinguished Biblical scholar, a powerful preacher, President of Conference, and Connexional editor.

Castle Court and the Circuit have also been “a happy hunting-ground” for ministers’ wives. The Revs. James Bonser, Elijah Cooper, ]ohn Taylor, Joseph Ferguson, D.D., George Cook, Albert A. Birchenough, John Shepherd, John Hancock, Wm. E. Webley, and H. Binnall Goodwin are amongst those who have found their “helpmeets” in this Salopian “vineyard.”

Castle Court has been favoured with a succession of godly and hard-working officials who have contributed both time and wealth to the upbuilding of the Church. John Drayton, Henry Binnall, Richard Askin, John Davies, David Angell, and H. Carless were some of the plodding toilers of a former generation, and whose names are revered for their works’ sake. For well nigh forty years Mr. Edward Birch has been a leading official and member at Castle Court. He has faithfully served as local preacher, Sunday school superintendent, and Circuit steward. Mr. Charles” Davies is the present Circuit steward. He is a local preacher, class leader, and a prominent worker. The Sabbath school at Castle Court is an old institution. During its long existence some thousands of young people have passed through its classes. While some have died in the faith, scores of others have become members of the Church, and are leading useful lives. It is worthy of record that it was the first Sunday school in our Church that held an annual effort on behalf of the African Mission Fund. The young people, by their Christmastide effort, have contributed some hundreds of pounds for the conversion of the heathen.

The Ministerial Association of the Tunstall, West Midland and Shrewsbury districts had its birth at a meeting that was held at Castle Court. At the Chester Conference of 1894, Shrewsbury was made the head of Connexional district. The members of Court Church are thankful for its remarkable history, and are trying to extend its usefulness amongst the inhabitants of this ancient borough.

The Circuit has had its “good times,” and is anticipating showers of blessing. The present ministers, the Revs. Albert A. Birchenough and F. Morgan Ridge,  are hoping that Shrewsbury, which is the old capital of Wales, may be favoured with a gracious revival of the work of God, similar to that of the Principality.

The photograph of the Shrewsbury Cross is reproduced by permission of Mr. T. Owen. It is a facsimile of the ancient Cross that originally stood where Bonser preached his first sermon in Shrewsbury, and is within sight of the entrance to Castle Court.