You are here: HomenextPlacesnextStaffordshirenextA - MnextBurslem: The Earlier Friendships of Hugh Bourne

Relating to the history of early PM chapels in Burslem, Staffordshire. 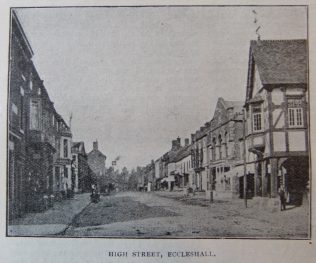 Transcription of ‘Sketch’ In the Christian Messenger by A.A. Birchenough

WHEN Hugh Bourne was exchanging worlds he had a foregleam of the glory that was awaiting him, and a reunion with those who had gone before. As he lay at the borderland of the valley of the shadow, he rapturously exclaimed, “Old companions, old companions. My mother!” Bourne’s earlier religious friendships and comrades in arms included Mr. Elias Hawley, of Burslem, a respected local preacher belonging to the Methodist New Connexion Church. They were kindred spirits, for they had many features in common. Both of them had belonged to the Burslem Wesleyan Circuit, and had taken a prominent part in the ecclesiastical reforms of Mother Methodism. Both Hawley and Bourne were deeply interested in Sunday School work, and the fire of religious enthusiasm burned in their hearts. Both had a burning desire for the conversion of the people in the neighbourhood of the North Staffordshire Potteries, and for the extension of Christ’s kingdom amongst men.

The author of “After a Hundred Years” says Mr. Elias Hawley was born in the year 1764 at the mining village of Boon Hill in the extensive North Staffordshire parish of Audley, In early life he removed to Burslem. Although he was deeply religiously impressed during his youthhood, he did not surrender himself to the claims of Christ until he was twenty-five years of age. Mr. Hawley’s conviction for sin was accomplished while he was following the questionable pleasures of life.  During the Christmastide holidays of 1788, he, in company with some five or six Burslem potters walked through snow and storm to Edgmond, near Newport, Salop, with the intention of playing a match at cards with a party of Salopian gamesters. After continuing the game for some hours, and as midnight approached the noisy revellers, Elias Hawley suddenly became mysteriously affected. His thoughts powerfully troubled him; his conscience was aroused. Gloom was stamped upon his countenance, and his knees smote each other. Hawley threw the cards upon the table, rose from his seat, and solemnly declared that he would never play another game as long as he lived. Amid the ridicule of his companions, and notwithstanding their entreaties to remain, he abruptly left the room. He was deeply convicted of his wrong, and he attended the services at the Burslem Methodist Chapel. Whilst wrestling with the angel of the Covenant in his own habitation, he realised the sense of Divine forgiveness. He was soundly converted, and at once he joined the fellowship of the Methodist Church.

In the year 1796 he entered into the ecclesiastical throes of the Kilhamite controversy. He withdrew from the Wesleyans, and was one of the founders of the New Connexion Church in Burslem. For some time the members of this newly-formed religious organisation worshipped in a cottage at Hot Lane, until the opening of Zoar Chapel. At the dawn of the nineteenth century the outlook of this people was far from encouraging. While Mr. Hawley was attending the service at Zoar Chapel on Christmas Day, 1801, he was greatly depressed with the unpromising future of the society. However, he was impressed with the thought that the formation of a Sabbath school might possibly prove to be the salvation of the Church. After consulting his friends, a circular was distributed throughout the town, asking for the co-operation of workers, and the assistance of heads of families. In March, 1802, Mr. Hawley opened the Sabbath school which gave a new lease of life to the New Connexion Church, and benefitted the town of Burslem.

Having been a successful local preacher, Sunday school superintendent, class leader, church worker, and Circuit administrator, he preached for the last time in 1827, his text being, “The end of all things is at hand.” During the next year he quietly passed away to the Church Triumphant.

On Wednesday, September 20th, 1809, Mr. Hawley sent for Hugh Bourne to arrange for him to preach at Eccleshall—a small agricultural town situated between Stafford and Newcastle, and some twenty miles distant from Bemersley. At Eccleshall was the residential palace of the Lord Bishop of Lichfield and Coventry. The townspeople had a notorious reputation for drunkenness, Sabbath desecration, and open profanity. In those days Methodism was at a great discount in the town. Bourne and Hawley agreed to go together within a month or five weeks’ time. On Saturday, October 21st, they proceeded to Eccleshall. As they walked along the country lanes, they conversed on the deep things of God. “On the way,” says Bourne in his journals, “Mr. Hawley told me that being once at Madeley in Salop, the bargemen sent a request to Mrs. Fletcher to pray for rain. The river Severn is not made navigable thereabout, and therefore in time of drought the channel is so shallow that they cannot work. There had been a long drought She related the request and said probably some of them were great sinners and the Lord was punishing them to humble them. After enlarging awhile on this head, she said, ‘however, we will pray for them.’ She then prayed for the Lord to send rain. The congregation firmly believed the Lord would give rain, and the next morning it rained heavily. Elias Hawley had to come home, and was much wetted.” These remarkable answers to prayer strengthened Bourne and his companion for their mission on the following day.

At nine o’clock on the Sunday morning Hugh Bourne led a class meeting and “had a good time.” He then retired to a field for private prayer, and afterwards attended the morning service at the Eccleshall Parish Church. At two o’clock Bourne preached from Hosea xii., 7, “and had good liberty, and was exceedingly happy in prayer.” At night he spoke from 1 Peter i., 7, “and had wonderful liberty.” Mr. Elias Hawley returned to Burslem, and Hugh Bourne went forward to Market Drayton. During the next fortnight he was evangelising the towns and villages lying around the Shropshire Wrekin.

The first New Connexion Chapel in Burslem was built at the sole expense of Mr. Job Ridgway, whose family were prominently connected with North Staffordshire Methodism. He gave it the name of “Zoar,” but, for some reason, it was derisively known by the inhabitants as “The Salt Box.” It was opened for worship in the spring of 1799, and provided accommodation for five hundred worshippers. After the formation of the Sunday school – through the influences of Bourne’s friend, – and in the first decade of the nineteenth century, the members of Zoar were full of holy zeal for the welfare of God’s House. A minister of those early times bears the following record of a service he conducted in the early years of the nineteenth century. He says; “The Spirit of God moved powerfully among the people, their feelings were touched, and they began to pour out their Amens like claps of thunder. Oh, what a shout we had! Such a race of Ameners I never heard in any part of the Connexion. We had a glorious time.”

Owing to the increasing congregation and Sabbath school at old Zoar, a much larger chapel was erected in 1824. The old chapel was purchased by the Congregationalists who eventually sold it to the Rev. Robert  Aitken of “The Christian Society.” In 1842, the historic chapel with its hallowed memories was purchased by the Primitive Methodists for £340. Until then our people had worshipped in a small chapel in Navigation Road, to which six cottages were attached. It was one of the early speculations “that was purchased by faith and paid for by repentance.” Through negligence and mismanagement, this unfortunate Navigation Road property was a great source of financial anxiety to Hugh Bourne. As the reputation of the Connexion was at stake, Hugh Bourne, between the years 1842 and 1850 paid the mortgagees some scores of pounds from his own financial resources; even his Conference annuity was devoted to this purpose.

During our occupancy of Old Zoar, several structural alterations were made. During those thirty-six years many souls were saved, and through the agency of the Zoar Church the kingdom of Jesus Christ was extended in ‘the mother town of the Potteries.” In the year 1878 our people removed from Zoar, the chapel of Bourne’s early friend, to their new and spacious edifice in Church Street known as “The Clowes Memorial Church.” The good work that was begun by Hugh Bourne and his earlier friends is being continued by a noble band of God-fearing men and women.