You are here: HomenextPlacesnextStaffordshirenextN - ZnextTamworth: A short history of Primitive Methodism in Tamworth town centre 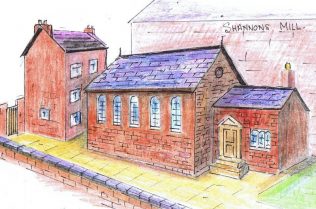 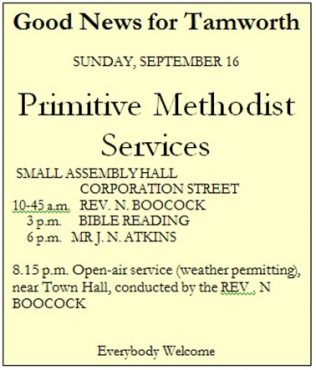 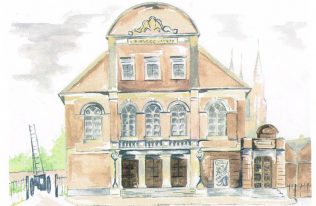 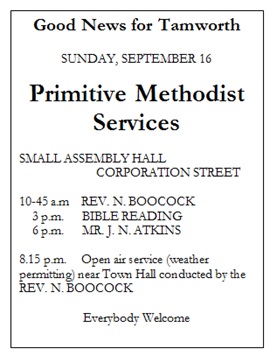 Prior to 1869 there were at least two attempts to establish societies in Tamworth town centre. One of them was so beset with problems that the Lichfield Primitive Methodist Circuit had to send at least one deputation to investigate which found leadership shortcomings and financial irregularities. It is little wonder, therefore, that this society failed!

After unsuccessful attempts to establish a lasting society in the town centre, in 1869, when the Primitive Methodist Conference appointed the Rev W Holland as Minister to the newly formed Tamworth Circuit, he was given the task of establishing a permanent mission in the town and a preaching room was rented in Gungate street. In the summer of 1870 improvements were made to it and sermons held on 21st August the collections being “to defray the expense of fitting out the premises as a place of worship.”

During these early years there was plenty of activity. As well as the Sunday services, there were class meetings, praise missions, a monthly missionary evening on the first Sunday, camp, tea and prayer meetings as well as open air services. Unfortunately, the society suffered a great blow when the Rev Birks (who had succeeded Rev Holland) left in July 1874. In reality, it was a double blow as Mrs Birks had thrown herself wholeheartedly in supporting her husband’s work there.

With the departure of the Rev and Mrs Birks the initial impetus was lost and little is recorded for the Tamworth society over the next few years. We do know, however, that the society always had difficulty in meeting the expenses of the preaching room. Sadly, in September 1883, it was concluded that Tamworth would have to come off the plan. No services had been held at all for 18 months and £10 in rent was still owed.

A new start, this time in Lichfield Street, was made in 1886. In November 1885 the old Quaker Meeting House in Lichfield Street, which had been empty since 1857, had been secured. It was felt that the move would enable the Primitives to “have a good hold on the town.” Over Christmas 1885, much hard work was done in renovating the premises. The pews were removed to be replaced by seats and the opening services took place on 3rd January 1886 conducted by the Station Minister, Rev J W Normandale.

There was a distinct lack of progress though. Yet again a town centre society was beset with leadership problems! The 1887 March Quarterly Meeting recorded that it deeply regretted “having so many things to do with during the last quarter at Tamworth, the small cause in the town which has suffered much in the past for want of….men to lead the way. Men who have been raised to officials have stood in the way of true progress and they have been a source of grief.” Nonetheless the Meeting was “glad to say we have rooted out the old stock, Mr and Mrs Wheeler excepted” though it was felt that the “bad influence which they have produced will perhaps take some time before we shall be able to live it down.”

Following the cull there had been some cause for optimism but this disappeared. By 1890 no services at all were being planned. However, services recommenced early in 1893. Mr H P Ellis, an evangelist, was appointed for 6 months and his labours bore fruit. A notable feature was the number of young people attracted. However, bearing in mind the cause’s history in the town centre, it is with no surprise that we find the 1896 June Quarterly Meeting noting

“Our Tamworth cause is not doing so well as we should wish largely owing to the unsuitableness of the premises in which we have to labour.”

In just what way the building was unsuitable is not made clear. It had been stated that it was a pretty place of worship. Since the departure of the Rev and Mrs Birks it had mainly been an upward struggle for a town centre cause and, in the summer of 1899, we learn that the cause in Lichfield Street had been abandoned but this was not the end of attempts to establish Primitive Methodism in the town!

A final attempt to set up a lasting Primitive Methodist society in the town centre was made in 1906 with the hiring of the small hall (Supper Room) at the Assembly Rooms, which held 150.

The first services were held 8th April. It is reported that there were good congregations and that the services were homely, bright and intensely spiritual. The Minister, Rev N Boocock, announced that they were not at the Assembly Rooms to stay. As soon as the congregation warranted steps would be taken to erect a church in a suitable part of the town.

An undoubted coup for the newly re-formed society was the holding of the Primitive Methodist District Synod at the Assembly Rooms in May 1907. The Synod opened with public meetings on the 3rd and 4th May and on the Sunday morning. On the Sunday afternoon there was the Centenary camp meeting at 2.30 pm in the Castle Grounds followed by a Great Public Lovefeast supported by 30 Ministers and Lay Preachers. The day concluded with an open air service near the Town Hall. The grand finale was on the Monday with the Grand Synod Ham Tea followed by a public Ordination Service for two Ministers.

On the 19th September 1909, the last special service of which we have a report took place which was the Harvest Festival. This seems to have been a success and it with surprise that it is noted that the Quarterly Meeting held on 3rd June 1910 noted the abandonment of Tamworth with the loss of 10 members. No reason was given.