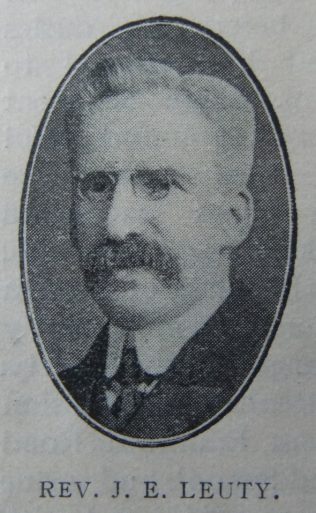 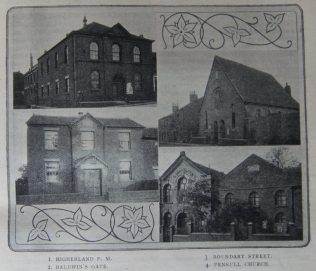 Transcription of Article in the Christian Messenger by Rev. J.E. Leuty

NEWCASTLE-UNDER-LYME is by far the oldest borough in North Staffordshire: its Charter dating back to the eleventh century. Probably it derives its name from a New Castle built under, or near the Lyme trees (forest) about two miles away (now Chesterton). Both trees and castle have long since disappeared. There is a stream running underneath the town, which by way of courtesy is sometimes called the River Lyme; but no historian has ever connected the name of the town with this stream. Kings had a deep interest in it at one time, but that, like the castle, has passed away. For many years this ancient borough sent two members to Parliament, but now only one, and the Parliamentary division includes Tunstall, Chesterton. Silverdale and The Friars appear to have had a good deal do with appear to have had a good deal to do with the town at one time, and built a large convent, which was suppressed as long ago as August 20th, 1538. The only evidence of them at present is the name of a street, “Blackfriars.” Very interesting facts could be given of the town, but space forbids. It may be noted, however, that Elijah Fenton, the Poet, was born here; also Philip Astley, of circus fame and Major General Thomas Harrison, who was a famous ally of Cromwell. The latter fought in the crowning victory of Cromwell at Worcester. John Goodwin, too, a great theological writer of the seventeenth century, claimed Newcastle as his birth-place.

Primitive Methodism was early established in this town, although the method of its entry cannot easily, or with precision, be traced. Within three miles of Tunstall, about the same distance from Burslem, two miles from Stoke-on-Trent, and eight and a half miles from Mow Cop, it is unmentioned in Mr. Kendall’s classic history (except casually; see page 9, vol. II). From the first printed Plan in the Connexion, it may be gathered that preaching was established at Stoke before Newcastle, but afterwards became a part of the Newcastle-under-Lyme Circuit. That the “founders” and fathers of the Connexion were familiar with the town goes without saying. William Clowes was married to Hannah Rogers, on the 20th day of July, 1800, in the Parish Church (St. Giles’). The name of Hannah Rogers is not written in the book, but “her mark” appears. This omission does not invalidate the marriage, but if a similar mistake were made now-a-days by an “authorised person” under the new Act, it would cause endless trouble with the Somerset House authorities.

The first Primitive Methodist chapel was built in 1823, and with subsequent enlargements cost £2,300. This includes the schools in the rear. It will be seen from our picture that it is a plain, unpretentious building, but within its walls good work has been done and spiritual triumphs witnessed. The Society worshipping in this Higherland Chapel contains some good and loyal families, who for a generation or two have upheld the cause. For long terms of service the record is particularly good. Mr. Thomas Lovatt has been in the Sunday school forty-nine years; Mr. William Hickman fifty-four years; Mr. Richard Maland forty-eight years; Mr. Thomas Maland forty-four years; Mr. Thomas Lindop thirty-seven years ; and Mr. Richard Hickman thirty years. The first four have been superintendents for extended periods.

The work of the Church and Sunday school must have had a gracious influence upon the town. Whilst faithful and loyal to the religious calls of life, some have engaged in civic work. The late Robert Mayer was the first Primitive Methodist Mayor of Newcastle. At the present time the Church boasts of an Alderman and a Councillor, viz, Alderman W. Hickman and Councillor George Scott. Mr. Scott has just recently been made a Justice of the Peace.

THE HIGHERLAND CHURCH has had the honour of sending into the ministry three able men: Rev. T.R. Maland, now at West Bromwich; Rev. Joseph Maland, at Wolverhampton; and Rev. Thomas Maland, who is labouring at Bath. Miss Jennie Maland, who was at St. George’s Hall as a Sister of the People, and is now at Darwen in a like capacity, belongs to the same family. The Malands have been a staunch and faithful family, and consistent workers.

Three of our ministers found wives in this Church, the late lamented David S. Prosser marrying a daughter of the late Robert Mayer, and the Rev. W.B. Bache taking off another sister. The Rev. T. R.Maland married the daughter of Mr. Thomas Lovatt, Circuit steward.

In the Newcastle Cemetery, one of the most beautiful and best kept in the country, the remains of the Rev. Philip Pugh are interred, also the Rev. Maurice Nicholas. Around them lie quite a number of sainted dead whose memory is precious.

The second place built in the Circuit was PENKULL, in 1836; the cost of which was £1,100. Penkull is honoured in being the birth-place of Sir Oliver Lodge. It is situated on the hill overlooking Stoke. We have practically the field to ourselves in this village, but somehow of late years we have not been doing what we ought. The Society has suffered heavily from removals, and new comers have been scarce. At one time the church was a very flourishing one, and the hope is entertained it may be again. The premises, as will be seen from our picture, are exceedingly good. Mr. W. Colclough has been a teacher here for twenty-six years, a trustee, and a tower of strength.

BALDWIN’S GATE was built in 1859, at a cost of £420, with seating accommodation for 160. It has a sound and faithful Society, with Mr. T. Sargeant at its head; a man every inch of him.

BOUNDARY STREET, in Newcastle, was built in 1869, and seats 200; cost £590. It has had a fluctuating history ; its greatest lack being school accommodation. Mr. Mark Ridgway has been a teacher here for over forty years, and has had hundreds of scholars through his hands; but alas! they have been lost to us when they have reached their teens.

HANFORD is a pretty little church, three miles from Newcastle; built in 1883, at a cost of £290, and will seat 175 persons. It is free from debt, thanks to the indefatigable labours of Mr. H.G. Croxton, a bailiff in the employ of the Duke of Sutherland, on the Trentham estate. He has been well supported by a true band of workers. Mr. Simpson Dix has been a teacher here for thirty-two years, and Mr. A. Foden for twenty-six years; both are local preachers.

CROSS HEATH is a mission, about ten minutes’ walk from the Town Hall; and there is every prospect of a new church being erected here under the energetic labours of the Rev. W.E. Webley, the present superintendent minister. The present structure is of wood, and was bought in 1902, at a cost of £278 (including land), and is free from debt. It seats 100. A good Sunday school has been gathered, under the superintendency of Mr. J. Evanson.

The Circuit is compact; places easy of access; the longest distance six miles, to Baldwin’s Gate. With the present staff of workers it ought to renew its youth, and witness greater things than in past years.