You are here: HomenextPlacesnextStaffordshirenextN - ZnextTunstall and the First PM Pulpit

Tunstall and the First PM Pulpit

For how long was it used? 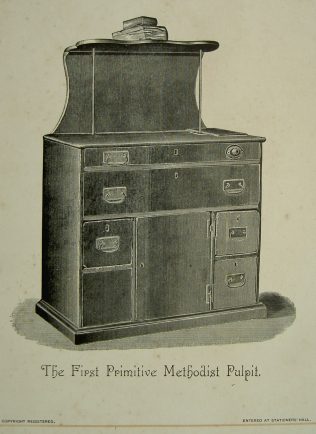 Among the artefacts belonging to Englesea Brook Museum is a print of the first pulpit used in the Primitive Methodist Connexion. The pulpit itself is on display at the museum and pictures of it in books and on postcards are common, but this print is more unusual. With it is an extremely discoloured printed sheet, which has been transcribed, and both the print and the transcript are reproduced here. It had been supposed that the pulpit was only used for a brief period, but this sheet says it was in constant use as a pulpit from c.1807 until the first Primitive Methodist Schools were built at Tunstall in 1836. The print was produced as part of a bazaar held to halve the debt of £3,000 on the premises. The date can be fixed to c.1890 by the mention of the Revd Thomas Anthony Wagstaffe, who only arrived in Tunstall in 1889 and Emanuel Loverin, who had left Tunstall for Wigan when the 1891 census was taken.