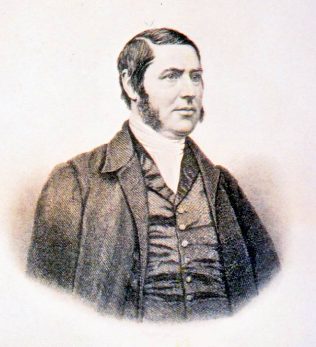 Robert Key, the great evangelist, missioned some of the villages of south Suffolk and north Essex in the later 1830s.  He wrote of his work in his memoirs, The Gospel Among the Masses which was published in 1866.

‘Polstead is a large and scattered village in the county of Suffolk, about four miles from Hadleigh; famed in the annals of crime for the murder of Maria Martin in the Red Barn.  The moral state of its inhabitants was exceedingly low and degraded.  I was informed that there were seventeen houses in the parish at which beer was brewed and sold without a licence.  For many years Polstead supplied a number of criminals for the county assizes, but few courts being held without some prisoners from the parish being there.  Barns, malthouses, shops etc were often visited by a gang of armed men for the purpose of plunder.

I entered the village in 1837 and took my stand on the green, near the public house.  One Sunday morning, a man by the name of J. Beeston was in the public house drinking a pint of beer, when I commenced singing.  He said to someone present, “I have heard a good deal of talk about this man; I will drink my beer and go and hear him, and then I will come back and have another pint.”  He came, he listened. He felt, for I was pouring forth some red-hot truths in quick succession with an influence enough to make hearts of stone to melt and eyes of marble weep.  He had not stood long before, as he said, “he began to pump and could not conceal his tears, but became deeply affected”; as did a number of others as black as himself.  He went in the direction of home as soon as the service was closed, saying he did not want any more beer that morning.  A considerable awakening took place among the people, some of whom had been a pest to the place and neighbourhood.

One day, after having walked about thirty miles without either dinner or tea, and preached in the evening at a new place, I failed to obtain a night’s lodging.  I had been to different inns, but could gain no admission, all pretending to be full.  I had walked until the blood squeezed out at the top of my shoes and I had torn out the linings of my trousers and bound up my bleeding feet.  About midnight I got as far as Hadleigh heath.  I could get no further.  I knew a person living there who had heard me preach once.  I turned aside to see if the family were up, thinking if they were I would try them.  I got to the front gate and seeing no light, my heart sank within me.  What next to do I could not tell.  After a few minutes’ reflection, I thought I would get into their straw stack standing close by.  While approaching it for that purpose, however, I began to ask myself what the consequences might be were I found there.  It was about the time the rural police-force was established and I felt convinced that, should I be discovered by one of them, I should probably be taken up as a vagrant and my missionary enterprise blasted.  Leaning over the front gate, I wept like a child and lifted up my heart to God.  A powerful impression was made in my mind, and as it seemed to me, an audible voice said, “Call them up, call them up; they can only deny you”.  So, screwing up my courage, I roused at the door.  A voice thundered out from the front chamber, “Who is there?”

The window was immediately opened and I said. “Will you be kind enough, for Jesus Christ’s sake to take in a poor, weary and worn out servant of His for the night?”

I distinctly heard the woman say to her husband, “That is the preaching man”.  She immediately dressed, came down and received me as if I had been an angel from heaven.  She at once prepared supper for me, but I was so overwhelmed with a sense of God’s goodness that I could not partake of the provisions her hospitality spread before me, nor sleep when I had retired to rest.  That visit was a very successful one; both the man and his wife were powerfully impressed and were soon brought in among us.  The servant girl was led to embrace the Saviour and united with us.  The woman’s father and mother were soon added to our ranks and their house was open at all times for my reception which I found to be a great accommodation when homes were scarce and friends few.

We soon obtained a house on Polstead heath where divine worship was regularly conducted; and the cause is much indebted to Mrs Richardson to this day for her kindness and attention, ever meeting trouble without murmuring or discontent, and being always ready to make the congregation as comfortable as possible at all times.

One morning, during conversation after breakfast with Mr R. Beeston (the person whom I had called up), he said “Mr Key, we want a chapel here.”  I said, “Yes,” but cast the idea aside for I saw no prospect of getting a chapel up in the place.  He, however, repeated it and said, with a strong emphasis, “We want and must have a chapel.”  I still paid little or no attention to his remarks, for, as a stranger in the county, I did not where or how to raise five pounds.  At last he said, at the same time putting his hand into his pocket and, bringing out two five-pound notes, “I will give you ten pounds towards it; you must beg what money you can and I will find you the rest on mortgage.”  I thought it was now full time for me to move.  “I shall,” he said, “go and purchase that piece of land – referring to a small field of about one acre – and you can take what you like out of it for the chapel.

After the land was bought and preparations made for building, I thought the matter over seriously.  This being the first Primitive Methodist chapel in this part of the county, and the cause newly established, it seemed problematical whether the interest would stand or not; and if the chapel should at any time have to be converted into two cottages, I concluded that they would not be worth much without a garden; I therefore took one-fourth part of the field, about a quarter of an acre, and let for a garden what was not necessary for building purposes.  The chapel was soon reared and opened for divine worship, the cost being about one hundred pounds, fifty of which were raised by subscriptions and collections.  Mr and Mrs Beeston regularly gave a shilling a week for their class and ten shillings a quarter for their seats in the chapel.

A good cause was established in the village.  Several very bad characters were brought to a knowledge of the truth, and a great reformation in the morals and habits of the people were apparent to all who had any knowledge of the parish.  My prayer is that the good work may go on until the end of time.’

Robert Key continued his career as a popular, passionate, evangelistic preacher, achieving thousands of conversions and who attracted the nickname ‘The Apostle of East Anglia.’ In modern times he has been remembered with a road named after him at Mattishall.