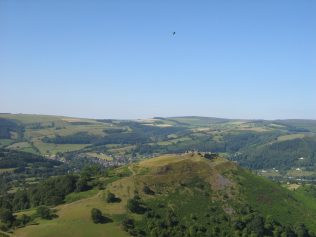 The Oswestry Circuit archives and the Primitive Methodist Magazine contain these reports:

April 1834 In Wales we have opened various places and two or three of our local preachers regularly preach in that tongue. We desire to give glory to God and to pray for the outpouring of the Holy Spirit upon us more and more.

1834 On 3rd August a camp meeting was held at Llangollen. The morning was exceedingly fine. A company of us went from Rhosymedre; we sung through the Cefn, assisted by some of the elder scholars of the Sunday School. On our way we were overtaken by Brothers Doughty, D. Davies, Bynnor, Fitzgerald, and T. Morris. We were now very strong; and when we reached the town we sung through the whole, to a beautiful green. We were furnished with a new waggon, and were shaded with trees from the heat; and the people had timber to sit on. This green is situate in a beautiful vale; behind us and before were large mountains, and the praises of God sounded sweetly.

We had English and Welch singing, praying, and preaching through the day; and such attention as I never saw before. I have attended many English, some Irish, and two Welsh camp meetings; but I think the Welch are the most attentive hearers.

In the praying companies there seemed sometimes to be a general move; “Deolk! Deolk!” cried the Welchmen.

When we separated for dinner, it began to thunder, lighten, hail, and rain in a very tempestuous manner;  but by the time we were to commence it cleared up, and was as fine as in the morning. About five o’clock we broke up, and the brothers from Oswestry and beyond went home. Between six and seven in the evening M. A. E. Cordingley was to preach in the house; but the congregation becoming very large, she and Brother W. Owens preached in the open air, to a large and attentive congregation. Prayer followed. We then went into the house, when the people got into full glory. One was seeking the Lord in one part of the house, and another in another. One cried aloud, struggled a little while, and then rejoiced fully. Another sought till he could call the Saviour his. When we concluded one of the society of Llangollen began to exhort. I thought, When the heavenly baptism descends, the tongue of the stammerer gets loosened, and then they can prophesy.

1836   Welch language mission has declined and at this quarter day we have given it up.

June 1841 [Resolved:] That there be a Welsh mission

(Richard Cordingley did not write Welsh. “Deolk” is diolch (thanksgiving), and the line from the hymnbook is based on Psalm 100 and is, in full,

If anyone can supply further information about the short-lived Welsh-language mission to Wales and the Welsh-speaking part of Shropshire, I would be very grateful to learn as much more as I can.)