You are here: HomenextPlacesnextWiltshirenextNorth Wiltshire and Primitive Methodism.

description by Bramwell Hill from the 1832 Centenary Souvenir Handbook of Causeway chapel, Chippenham 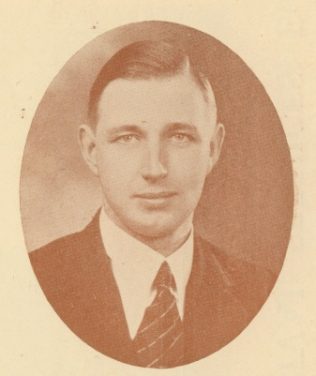 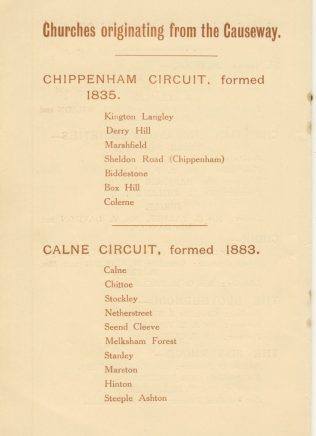 In the year that Primitive Methodism in Chippenham celebrates its centenary, the name will pass out of our current ecclesiastical language after 122 years of use.  We believe however that the new Methodism will know the same distinctive note, the same peculiar witness, the same virile spirit of enterprise in the things of good report which has made its mark upon the page of history and produced in our midst a type of disciple, to which this land owes a special debt.  After its own manner the torch will burn in a new setting: the fire will continue to make its presence felt.  The spirit of the other days will remain our inspiration for new days.  Through the faith of those who have laboured long and well, we shall subdue the kingdom of our times and add new lustre to the life of now.  Cameos of old stalwarts, village worthies in quiet places, saints in homespun, will abide with us, that in our contending, we may serve and witness worthily.

The peculiar witness of the Primitive Methodist Church to the life of the century covered by its existence, may be instanced by some words I came across in a book by Mr J.E. Thorold-Rogers, in which an unexpected, but exceedingly happy reference occurs.   In the book “Six centuries of work and wages,” he says – “ I do not believe that the mass of peasants would have been moved at all had it not been for the organisation of the Primitive Methodists, a religious system, which has done more good with scanty resources and perhaps in some people’ s eyes with grotesque appliances for devotion, than any other religious agency.  I have often found the whole character of a country parish has been changed for the better, by the efforts of these rustic missionaries. who possess many of the qualities and have reproduced not a little of the discipline. which the preaching Friars of the thirteenth and Lollard Bible men of the fourteenth century  displayed.  I believe it is true that all religious movements have aimed at heightening the morality and improving the material condition of those whom they have striven to influence.”

To this end truly our men have given their best to public service and municipal life.  We have many strong figures among us who find their highest joy in service for the common weal, and every succeeding Town Council and public body finds a refreshing type of man forthcoming, products to a very large extent of our Churches.  In other spheres they make their presence and witness.

We have developed the village man, the leaders of worship in quiet places.

History will be the best corrective of the mistakes we bay make in judgment and enthusiasm, because of our close proximity to events and movements.  What we may claim quite honestly, and with fullest justification, however, is a double portion of the spirit of those who, with scanty resources and perhaps in some people’s eyes with grotesque appliances for devotion, have helped to change the whole character of the countryside for the better.  Rustic missionaries, yes, but full-orbed in their devotion to the things in which they believe.  Qualities which reproduce in others the desire for “the better country”, which marked the men of faith in the Epistle to the Hebrews cannot be disregarded by those who would correctly assess the influences which go to make up “our rough island story”.

In such a mind, we attempt here to sketch the story of the rise and development of the Primitive Methodist Church in North Wilts.  It was in the Shrewsbury Quarterly Meeting that Revs. S. Heath and E. Vaughan were requested to break into the more immediate country of Old Wessex.  They came to Brinkworth in 1824.  The trek of the travelling preachers was through Cirencester where they were not accorded a particularly happy reception.  They tried in vain to get a footing.  On they came to the long straggling Wiltshire village of Brinkworth, four miles in length, where Hugh Bourne once preached, under a tree.  Wiltshire was kind to the early missionaries, they secured a hearing and were received with tolerance,  Strange as it may seem, but we have won our greatest victories among the gardens.  From the big-hearted Brinkworth Quarterly Meeting the decision came to mission Chippenham.  “Mother of us all” as she has been called, Brinkworth has retained the name she bears as part of a District, the only village so distinguished all these long years.

It was easy geographically for the missionary hearted brethren of those days to turn their eyes to Chippenham.  Out for the extension in the name of the Lord, Chippenham was first missioned in the early twenties of the century, but with partial success.  Rev. Samuel Turner, in the year 1832, remissioned Chippenham.  He was accompanied by the Rev. J Baker.  In spite of opposition, for the Rev. J. Baker was imprisoned for preaching in the Market Place, the labours of these men were successful and the Friends Meeting House in the Causeway was acquired in 1834.  This was purchased and is now the schoolroom.  In Rev W.C. Tonks’ delightful history “Victory in the villages,” a history of the Brinkworth Circuit published by him in 1907,  it is recorded that the June Quarterly Meeting of 1832 resumed its missionary operations and it was decided to re-open Chippenham, where no society had been founded since the attempts of the earliest days.  Turner and Baker were sent as the missionaries of the new undertaking.  For one quarter this appeared on the Brinkworth plan as the “Castlecombe Mission” marking the beginning of the new extension.  Considerable opposition was forthcoming.

Plenty of legology needed in getting to and from these places!  Their very thought envisions a problem in transport to us.  In the list of travelling preachers we find, in 1837,  that J. Coxhead is superintendent and R.Tuffin is second preacher, with a lady preacher, Sarah Gales, also on the staff.  In 1838 J.E. Davis occurs as second preacher and in 1839, Job Bodman.  In March 1839, E Foizey is supt. and another lady, Elizabeth Randell, is a stationed preacher.  Charles Peaty is a second preacher in the last quarter of 1839, and Obed Pullen is No. 2 in 1840.  In 1842 we come across the name of S. Turner as supt. with J. Cook and W Juggins as second and third respectively.

Sarah Giles had £2 per quarter in 1837 and the supt.’s salary was £9 2s per quarter.  The single preacher had £4 per quarter.  The people with whom he lodged were allowed 4½d per meal for his food and 5s every quarter for “washing soap and candles.”  There is no mention of soap and candles in the case of the lady.  Maybe the work was too heavy and the food too meagre for it is recorded that the good sister broke down in health.  In those days the circuit steward received a salary – 1s per quarter!  This may have been his remuneration for shouldering frequent deficits and other arduous tasks of their office.

Another entry which strikes our imagination occurs in the records for 1839, the year in which the penny post was introduced: “Letter to Hugh Bourne 10d: letter to Presteign 9d.”  Hugh Bourne preached in Lowden nearly 100 years ago.  Stern and emphatic touches of discipline occur.  At the second quarterly meeting, 7 names were struck off the plan and 4 others were doomed to “sink a figure,” for some remissness or other  Reasons are not always given.  Neglect of appointments, sometimes unacceptability, would seem to be the faults concerned.  Publication of collections was insisted upon.  Preachers were fined who overlooked this duty.

Rev George Faulkner (a former Chippenham minister 1921-1924) in an article in the Christian Messenger in January 1922 pays the type of folk in Chippenham’s History a worthy and fitting tribute, – “What grand men they were!  Ignorant and unlearned for the most part, but fired with untiring zeal and manifesting marvellous devotion.  Their enterprise and enthusiasm carried them into all sorts of places: not a village was over looked, nor even a few houses in some remote spot missed.  Ever, they were pushing on, claiming new territory for Christ and His Church.  Lack of funds did not deter them; if travelling preachers were not available, they called them out of their own number and sent tem on.  They sang and preached wherever there were folk to hear; establishing preaching places wherever folk would come and listen.  If their names forgotten, their work remains, and if their methods provoke mirth or a smilek their success makes us envious.”  In such a mood we say, “ Let us hear about the tussle, the fight, the struggle, and pay tribute to their brave spirit by a response in our day as noble and high hearted.

The writer first knew the Chippenham Circuit in the Ministerial term of Rev. Francis J.C. Dyer, now of Barnsley.  The introduction has proved an inspiration.  Through the years between I have paid frequent visits to Causeway and Sheldon Road and here pay grateful tribute to the cordial welcome and kindly hospitality of many friends in the circuit.  I have found delight too in the friendship and fellowship of the ministers.   So much crowds in on the mind as one thinks of the work and the people who have done and are still doing valiant things for Christ and the Church.  In this centenary year it is well to recall such contributions as those associated with the names of Badminton , Stevens and Smith, and the contributions of other devoted families to the story of the whole.  I need a paint brush and canvas.  The these allures.  Of the “victors in the villages”  and country towns in this area, I could write much.  They have made me their debtor in the things of good report.  One walks , as in  the “garden of the unforgotten”  and thinks of those who have passed beyond; with those yet with us too to glimpse compelling cameo fragments of the other days, I have found happy tryst in many a rememberable conversation and set it down here, that to pen a few words by way of calling timely, if scant attention, to Chippenham Centenary implications, is regarded as a privilege indeed.