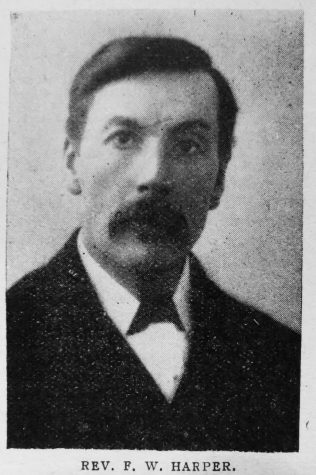 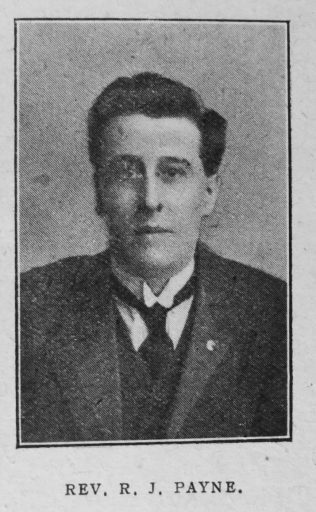 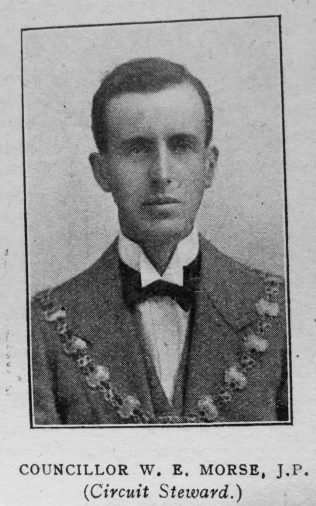 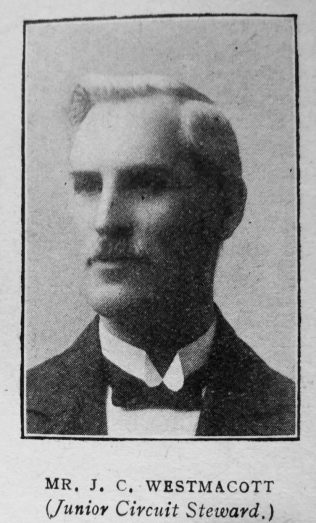 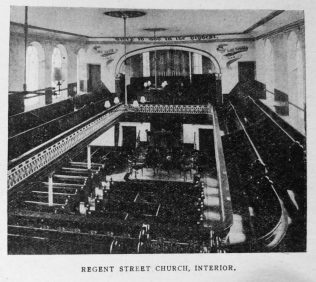 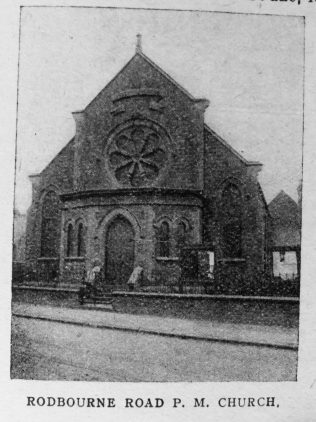 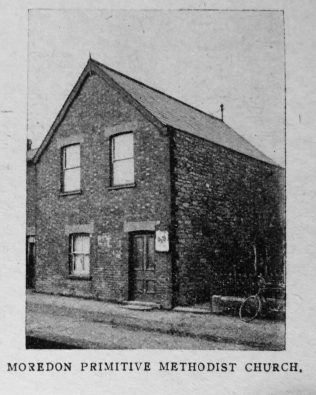 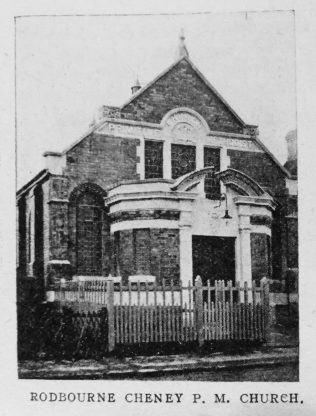 Transcription of Article in the Christian Messenger by Rev F.W. Harper

SWINDON derives its modern distinction from its position as an important junction on the Great Western Railway and as the manufacturing centre from which nearly all the necessities of the Company’s immense system are supplied. The American soldiers pleasantly called it “Springfield,” in remembrance of home-like conditions, and appropriately since, the Educational Authorities have opened up a correspondence by letters, between the school-children of the two towns, for the strengthening of amicable relations. Over ten thousand workmen are employed in the Locomotive and Carriage Works, in addition to a host of officials, clerks, labourers and others associated with the stores and other departments.

“New Town,” which sprang up hurriedly at the foot of Swindon Hill in response to the demands of the railway, bears many tokens of its rapid rise. lts central thoroughfares are narrow, and disclose how dwelling-houses were quickly converted into shops, with the increase of trade. It possesses some good public buildings, notably, the G.W.R. Mechanics’ Institute, with its splendid reading room and library; the fine town hall and municipal buildings; the Swindon and North Wilts Secondary School and Technical Institute, with manual workshops attached, one of the most complete of its kind in the country.

The more stately “Old Town,” with its residential houses of the better class, and its curious thoroughfares running like rivulets downwards to the plain in the same devious and inconsequent way, lies slumbering on the hill, except on market days, when its streets are lively with droves of cattle and sheep, and well-dressed farmers with their smart vehicles and modern motors, their wives, daughters or sons, add brightness to the scene. For “Old Town” as a market, has a history. When in ancient days England was known as a large wool-growing country, Swindon was a staple mart for wool. Times have changed, but Swindon market is still of considerable importance in this land of downs, of dairy farms and cattle rearing. From the top of the hill up which the trams rumble, and old gentlemen pedestrians climb pantingly, may be seen the undulating hills of downland and farmland with Liddington Clump dominating the landscape.

Many of the workers of the factory live in the nestling villages of the hills. Daily they walk or otherwise proceed to work. Thus walked Alfred Williams, the poet, for many years to his forge, learning Greek and Latin as he walked and dreaming of ideal things. Some of these mechanics come from the hamlet of Coate, where stands still, the house in which Richard Jefferies was born.

Not far from the fine Market Square in Old Town, with its imposing Corn Exchange and Tower, is the Midland Railway Station, nearly two miles from that of the G.W.R. Here came the loaded trains from the great war camp at Chiseldon, for which Swindon proved a convenient railway junction and a favourite off-time resort for soldiers. Down the main artery of traffic, linking the Stations and Old Town with New, the teeming crowds passed, khaki predominating, and when at last Chiseldon became a dispersal camp, and demobilisation a reality, every train poured forth its complement of released men, who trudged down shouting and singing in high glee, at all hours, to the G.W.R. to take train for home.

Once more the beautiful Bath Road running lengthwise on the hill, resumes its meditative silence and the ancient “Goddard Arms,” gray-tiled and weather-worn, with clean windows gay with foliage and flowers, stands quietly like a sentinel at the corner, as if it watched still for the coming of the old stagecoach.

Swindon Primitive Methodism dates back to those early days when New Town was principally green fields and agricultural land. In 1824 when the Shrewsbury Circuit sent its evangelists into North Wilts, a cause was commenced at Eastcott, on the lower slopes of the hill. In 1826, the “Wiltshire Mission” became the famous Brinkworth Circuit, with Eastcott sixth on its plan. Evidently Open-air Services were instituted early in Swindon Town, for Mr. Charles Morse, the grandfather of our present Circuit Steward, gives an account of services he conducted in the Market Square, in the summer of 1828. For over twenty years the indoor services of the small Society were held in various cottages until at last a site for a Chapel was secured through the generosity of the Edwards’ family, the occupants of the Eastcott Manor House. On one occasion Hugh Bourne conducted a service in this residence.

On Saturday, June 22nd, 1848, the foundation stones of the first Chapel were laid on a portion of the ground now occupied by the Regent Street Church. Prospect Place, higher up on the brow of the hill, the head of the Swindon I. Circuit, was not erected until 1870. In 1863, within fourteen years of the opening of the Chapel, the Eastcott Society had more than doubled its membership, applicants for sittings could not be accommodated, and the Sunday-school had largely grown. Hence the opening services of a second and larger Chapel upon the same site, were duly celebrated. Still the cause prospered, until in 1875, during the superintendency of the Rev. T.M. Plnnock, the present structure was erected at a cost (with additions since made) of £3,110. This is the famous Regent Street Church, associated so closely with the Morse family, and head of the Swindon II. Circuit, of which Mr. L.L. Morse was the first Steward.

In 1895, a new Sunday-school was opened which provides accommodation for 850 scholars. There is a large Assembly Hall, Lecture Room, and many Class-rooms. Including land, the cost has been £3140. The whole premises, including the Chapel, are free of debt. At present there are 398 Scholars and twenty-nine Teachers in the school, which is graded on modern lines. The Superintendents are Messrs. W. Barrett and J.H. Matthews. In Secretarial duties Mr. S.N. Matthews is indefatigable, and has earned the term, “an ideal secretary.” A fine number of young people are associated with its various Institutions, and are ardent workers in the Church. During the war, monthly letters were written by the children to the absent lads to keep them in touch with school and church events.

Regent Street Church has been favoured with a number of outstanding officials who have not only contributed to its success in all departments, but have taken a most prominent part in the affairs of the town. Several of them have been elected to the Mayoral Chair, and are well-known authorities upon all things pertaining to the Borough.

Alderman A.E. Harding, Society Steward of Regent Street, and the District Missionary Treasurer, is of this class. Intensely loyal and industrious, with good organising capacity, he wields an influence in the Brinkworth and Swindon District, second to none, as was evidenced by his election to the Chair of the District Synod at Wootton Basset.

Councillor C. Hill, J.P. (Mayor, 1913), secretary to the Regent Street Trust since 1875, belongs to the same category. In him has been revealed a peculiar aptitude for the post, and the present debtless condition of the premises is largely due to his initiative, supported by hosts of happy workers. For many years he acted as Assistant Circuit Steward, where also his financial genius found a fitting sphere. In Swindon Primitive Methodism his name is a household word. Associated with him for a considerable period as Trust Treasurer and Circuit Steward, was Mr. T.J. Mills, whose genial presence in God’s House is an inspiration to every preacher, nor must we overlook the faithful service of Mr. H.G. Ford, Assistant Society Steward, most regular in his attendance; he may be relied upon to render invaluable help on all occasions.

Possibly none have left a more permanent impression upon Swindon Primitive Methodism than Mr. L.L. Morse. The position which he won in the town he consecrated to noble purpose. As Mayor of the Borough, Member of Parliament for the Division, etc., he was ever alert to strengthen and to extend the borders of his beloved Zion. Generously he gave, freely he laboured, until to-day his memory lingers in the numerous living churches he did so much to create and foster. And at his right hand stood ever that gracious lady who, throughout his life, was his true and faithful companion.

Their only surviving son, Councillor W.E. Morse, J.P. (Mayor, 19I4, and 1915), worthily upholds the traditions. As Circuit Steward, Conductor of the Young Men’s Bible Class, and occasional preacher, he conscientiously performs his duties, notwithstanding the many claims of public and business life. Like his father before him, he presides annually at Regent Street Church Anniversary, and takes the chief responsibility of the arrangements for the Anniversary at Rodbourne Road.

The Junior Steward, Mr. J.C. Westmacott, is an acceptable local preacher. As organiser for the “Jubilee Fund” efforts he has been a great success. The Secretary of the Local Preachers’ Training and Examining Committee is Mr. G.P. Pickard, a local preacher of exceptional gifts. A lover of books, he has rendered much assistance to young men in their studies.

When the Circuit was created in 1890, it consisted of three Societies. There are now eight, which all lie in New Town or in close proximity. Rodbourne Road was formed in 1882, with seven members. To-day the membership is fifty-eight. The first Chapel, now used as a school, dates from 1883. The Church was built in 1900, and cost altogether £1,479. The present debt is £432. Mr. W. Mills is Secretary. The ladies of the Sewing Circle, with Mrs. Weston as President, are unceasing in debt reduction and other efforts. There is a Sunday-school of 177 Scholars and twenty Teachers, and a Band of Hope with 120 members. The School Superintendent, Mr. H. Weston, is also Class Leader and Assistant Society Steward.

Butterworth Street was the first Society formed after the division of the Circuit, and consisted of six members. The present membership is fifty-two. Services were held in a shop until the opening of the Chapel. The property is debtless, but the need of increased accommodation, especially for the school, is pressing. Only the outbreak of war prevented the carrying out of plans already sanctioned. One thinks gratefully of those who have kept the Church flourishing in days of stress, particularly the ladies of the Sewing-class, ever enthusiastic and loyal.

The Hamlet of Moredon was first missioned in 1831, and the Chapel purchased in 1902. There is a Sunday-school of thirty-six Scholars, and a good Band of Hope.

Rodbourne Cheney commenced with a Camp Meeting, after which services were held on Sunday evenings in the house of Mrs. Matthews. In June, 1894, Mr. L.L. Morse gave a piece of land for a Church, and on December 2nd, the place now used as a School was opened. In 1906, the new Chapel, seating 230 was built, at a cost of £693. The ladies, under the energetic leadership of Mrs. Matthews, annually reduce the debt.

Deacon Street is an iron structure, opened in 1900, and now debtless. During the period of the war it has been worked largely from Regent Street. The School-Chapel at Manchester Road was erected in 1902,and cost £1,161. It possesses a fine suite of Class-rooms. An ample site is reserved for the building of the Church. The School numbers 140 Scholars and eighteen Teachers. Among the workers, Mrs. Gullis claims special mention for her untiring labours on behalf of the Trust Fund.

The first services at Ferndale Road were held on July 19th, 1903. Its “Centenary Hall” was built in 1904. The total cost, £1,200, present debt, £227. Vigorous efforts are in progress under the direction of the Secretary, Mr. S. Gale, to further reduce the liabilities. The erection of a Church upon the splendid site secured is anticipated. There is a large Sunday-school of 254 Scholars, and twenty-two Teachers.