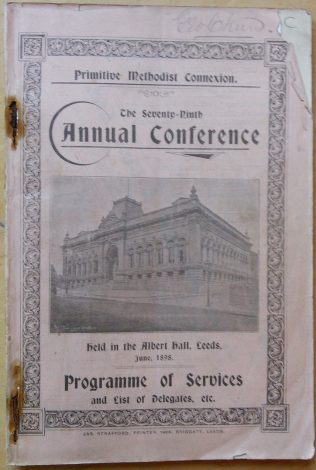 The city where the Conference of 1898 meets is one of the most ancient and yet in some respects one of the most modern cities of England.  Parsons in his history of Leeds says that in the time of the ancient Britons it “was a place of considerable eminence and importance; that in fact it was one of the twenty-eight cities mentioned by Nemieus which had their origin from the Romans.”  During the Saxon Heptarchy Leeds was a place of great importance, being the centre of the kingdom of Elmete.  Very little of ancient Leeds remains; its narrow streets and old buildings, with inconvenient angles have by the pressing exigencies of increasing trade and commerce, been superseded by wider streets, magnificent public buildings, shops and arcades.  Though the old town is dead its “Karma” continues; the “deeds” and ”act forces” have evolved a city which has become the commercial metropolis of Yorkshire and “stands in the list of the five great district centres of population in England, and is the principal seat of the English woollen manufacture and trade and the centre of mining, engineering and ironworks.”

It was in 1819 that the Primitive Methodists formed a society in Leeds.  Rev W Clowes had commenced a mission in Hull.  A newspaper called the Hull Rockingham which circulated in Leeds, contained accounts of the extraordinary labours and successes of that apostolic man, and was read in Leeds with the greatest interest, especially by a band of young men, about 15 in number, whose hearts God had touched, and who had been successful in leading about one hundred persons to Christ and into fellowship with those kindred souls in Hull?  An invitation was sent to the Primitive Methodists in Hull and a promise of co-operation if they would send a missionary to Leeds.  As soon as arrangements could be made, Rev W Clowes, accompanied by Mr Bailey of Ferrybridge near Pontefract, came to Leeds.  November 24th 1819 was the day of their arrival.

Rev W Garner says, “ Mr Bailey being intimately acquainted with Mr Bean, schoolmaster, he obtained the loan of his schoolroom for a religious service for the Tuesday evening.  Mr Bean’s room was situated in Kirkgate. For the following Sunday, Messrs S Smith and J Verity engaged a large room over Mr Sampson’s warehouse, in Longbaulk Lane.  Mr Clowes preached in the forenoon and a Mr Hirst in the afternoon.  During service, Sampson himself wantonly sounded a false alarm by announcing that the room was giving way, which created a good deal of confusion.”  Mr Clowes calmness reassured the people and no one was seriously injured.  In the evening Mr Clowes preached in Mrs Sally Taylor’s cellar in Kirkgate and several were converted,  On the Tuesday following, Mr Clowes met as many as could attend at Mrs Hopkinson’s, Hunslet Lane,  and took down the names of fifty-seven persons who formed the first Primitive Methodist Society in Leeds.  A number of adjacent towns and villages were visited and societies established,  These, with Leeds as their head, were made a branch of Hull Circuit in 1820.

The consolidation and extension of the work warranted the Conference in making it a separate and independent Circuit in 1822, the year in which a small chapel was built (since considerably enlarged) on Quarry Hill and in which the fourth Annual Conference of the young community was held in May of the following year.  No elaborate table of statistics such as will be presented to the Conference of 1898 could be laid before that Conference in 1823.  There were then reported – 45 Circuits, 202 Travelling Preachers and 29,472 members; but it was a glorious record of only thirteen years labour – an eloquent tribute to the faith and self-denying labours of our fathers.

In addition to Quarry Hill chapel, services were held in rented rooms and a small chapel was built in a yard in Holbeck.  Neighbouring  towns and villages were missioned and soon the Circuit became inconveniently large, there being the names of forty-six places on the Plan.  A division of the Circuit then took place says Mr G Allen in 1839, when Otley, with thirteen preaching-places, was constituted a separate Circuit.  Other divisions of the Circuit followed and the following Circuits were made from it: Dewsbury in 1869;Heckmondwike in 1870; Morley 1879; Stanningley 1880. Division and sub-division has taken place in the city so that we have now eight Circuits, all of which are doing good work.

The progress which has been made is by no means uniform.  Certain decades have been marked by great activity in chapel-building, while in other decades scarcely anything has been done in that direction.  In 1834 Silver Royd Hill Chapel was built; and in the same year Prince’s Field Chapel was built; and in 1839 Rehoboth Chapel in Park Lane was erected.  But strange to say, during the next thirty years, only one or two small chapels were built in the town.  In the seventies however there was great activity in chapel-building.  Belle Vue was built in 1871, Moriah Chapel rebuilt in 1873, Joseph Street Chapel was erected in 1874, Bourne Chapel in 1877, Branch Road Chapel, Armley in 1877, Southfield in 1878 and Holdforth Street in 1879.  During the following decade there were no new chapels built, but in 1984 Meanwood Road Chapel was erected and in the following year Cardigan Road Chapel was built.  The aggregate value of our church property in the eight Circuits is about £65,000 with a church membership of over 3,000.  While there is no room for boasting, there is cause for devout thankfulness to God for the success achieved and to confidently prosecute in the future our endeavours to make Leeds a city of God.

To the delegates and visitors to the Conference we give a most cordial greeting.  We welcome you to our city, our sanctuaries and our homes.  We trust your brief stay amongst us will be most pleasant and profitable.  We have prayed that your coming may be a help and stimulus to us in the work we are engaged in for our Lord and Master in this great city; and also that in your fellowship with us in Christ you may realise am increase of spiritual power, so that when the Conference is over, you may return to your Circuits more fully equipped for the work awaiting you.