You are here: HomenextPlacesnextYorkshirenextH - NnextLeeds: Primitive Methodism in Leeds in 1922

Leeds: Primitive Methodism in Leeds in 1922

Description by Rev Ernest Barratt B.A. taken from the Handbook of the 103rd Annual Primitive Methodist Conference held in Leeds in 1922 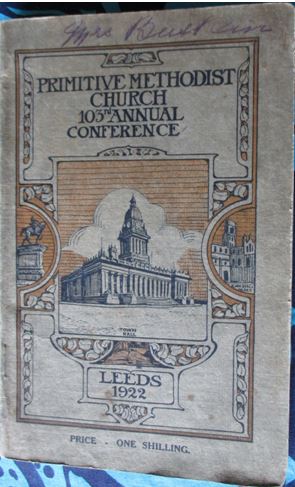 “When Mr Wesley first came to Leeds,” said a member of the original class meeting in 1743, “we took him into society; he did not take us in.” Seventy six years afterwards, William Clowes came to Leeds not to create, but to be received by a class-meeting which had been in existence some time.  How the class came to meet is the story of our beginnings in Leeds.  In the early years of the nineteenth century across the stormy and sombre back ground of English national life flashed the lightening of of a mighty revival.  William Bramwell thrilled Leeds; the clouds broke when he preached; and amongst those who walked in a new light were young men with a consuming desire to spread the good work.  Led by and apprentice, Samuel Smith, they devoted themselves to missioning the courts and alleys of the town.

Eventually they made common cause with a class led by John Verity and sent a famous letter to Hull, asking that a ‘Ranter’ preacher should be sent to them.  In response, on November 24th 1819 William Clowes entered Leeds and formally constituted the meeting a society of the Primitive Methodist Connexion.  There were 57 members, and out of the 57 no less than eight became ministers and passed into the wider work of the young denomination.  The influence of Clowes was extraordinary.  He preached in and about Leeds caring for the new cause as a mother cares for her child.  Progress was amazing.  In six months Leeds was made into a Branch of the Hull circuit and a year afterwards it was made an independent circuit.  The 57 had become a thousand in eighteen months!  The street corners, the cross roads, the open fields, the humble cottage or the rented room were the preaching places on the plan.

A society which met in an old factory in East Street was the first one to strike root.  A site on the then outskirts of the town, Quarry Hill by name, was selected and there the “Leeds chapel” was built in 1822.  The “Leeds chapel” figured prominently in the eyes of the Connexion in the early years; two Conferences, and many important Connexion committees were held there  The London delegates may be interested to know that the first Quarterly Meeting held in the “Leeds chapel” decided to add London to the list of preaching places on the Leeds plan!  Effect was soon given to the decision and just one hundred years ago, the Leeds and London stage coach bore Paul Sugden and William Watson over Leeds Bridge on the Metropolitan quest.

Quarry Hill chapel was not only a cause for pride, but, so far as the trustees were concerned, a source of financial anxiety.  It was not until about ten years had passed that any other society ventured to build, but in the thirties and the early forties each surviving society set the bricklayers to work.  Plain, unpretentious structures were erected where land was cheap.  Not many of them are used for worship now, and the few that are have been considerably enlarged and remodelled.  Commodious premises, much better equipped, handsome structures on excellent sites have superseded them.  It is good to know that some of the most modern and the most costly and free from debt.

Leeds has not been without influence on Connexional progress.  The General Chapel Fund and the Sunday School Union are developments of enterprises begun in Leeds and worked locally with such success that the Connexion adopter them and at first officered them entirely from Leeds.  The Arlesford Orphan House was bought and our Orphanage work commenced mainly because the Leeds circuit faced the Conference of 1899 with the purchase money already secured.  The Bible and Prayer Union sprang from Leeds and in the cit the first P.M. Council was formed.  The latest local venture is the Boys’ Home in Brudenell Road, which is doing a redemptive work warmly commended by the City Justices.

Many circuits have been formed from the old Leeds circuit which William Clowes founded.  The area entertaining the Conference is but a fraction of the ground it covered.  The present Leeds circuits with the closely adjoining Morley and Pudsey circuits, consists of 44 churches, 3,766 members and 15 ministers in active work.  Leeds is regarded as a town in which Methodism has been successful and the figures given compare with general Methodism without discredit to our Church.  Leeds Primitive Methodism has kept its end up and its grip is tightening.  The many Memorials in our churches bear solemn testimony to heavy and irreparable losses sustained in the Great War and explain why the major portion of one generation is mission.  Time however does not stay its hand and the most hopeful feature of the present day is the presence in considerable numbers of bright young people who give promise of meeting the new conditions with the forcefulness and enterprise which distinguished their forebears.