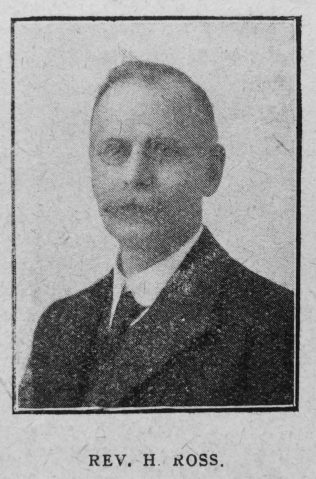 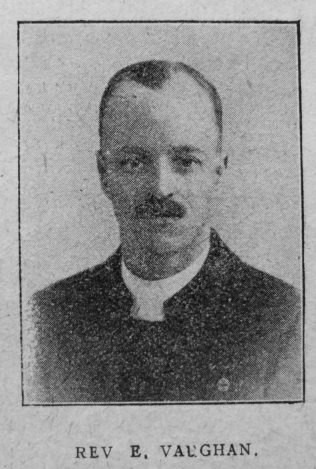 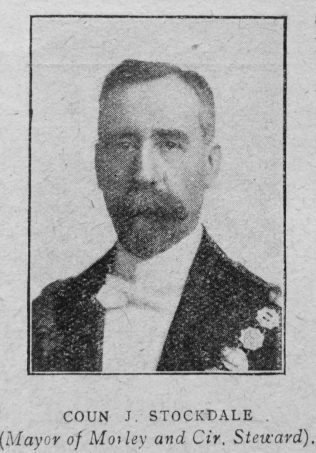 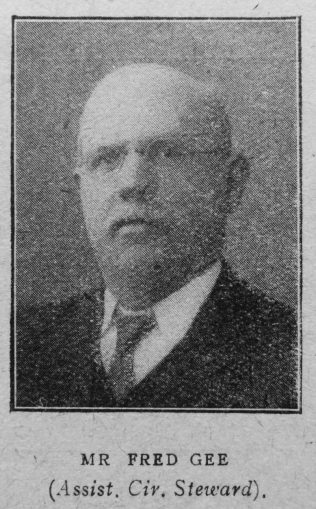 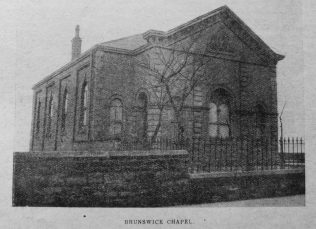 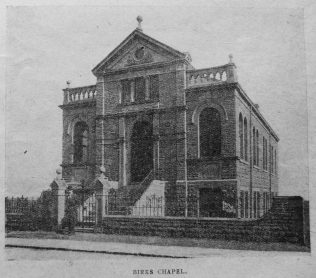 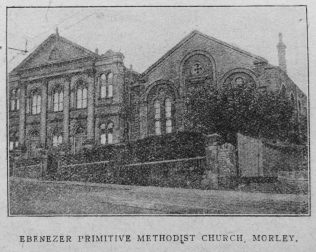 Transcription of Article in the Christian Messenger by Rev. H Ross

MORLEY is a typical West Yorkshire manufacturing town. Scattered over the foothills that abut “the backbone of England,” it possesses natural advantages which might easily have resulted in one of the most beautiful towns of the great Northern Shire. It is, however, so frankly devoted to the production of cloth, coal and stone for commercial exploitation, that whatever picturesqueness it may have once possessed, has been ruthlessly sacrificed to the utilitarian demands of “getting on.” Some amends in this direction have been recently made, and one does not despair of seeing Morley even yet a place pleasant to live in. Situated some four miles South of Leeds, it has both suffered and gained from its proximity to the great industrial capital of the West Riding.

Its people are for so large a town – it boasts over twenty thousand inhabitants – predominantly natives, and native characteristics still prevail. Were it not for the smoke and grime that cloud its atmosphere, and coat its buildings, it would charm the casual visitor by the higgledy-piggledy way in which its streets and places are scattered over its seven hills. To walk down Queen Street and note how mill, and shop and market, modern residence and ancient cottage jostle each other, is to obtain a queer impression of wondering interest, and amazed delight. For here is a magnificent Town Hall, there a palatial suite of modern shops, just beyond, a fine old house hiding itself modestly away, as if afraid that its identity as the birthplace of Sir Titus Salt might be questioned. And other titles to fame our town possesses. Was not Mr. Asquith born here? and is he not an honorary Freeman of the borough? Is not St. Mary’s Congregational Church linked with some of the most romantic and stirring chapters in the history of British Nonconformity? Does not the history of the town go back to Anglian and Danish times? and is not all its story set forth with fascinating detail in “The Story of Morley,” published by the great house of Pitman?

But what of Primitive Methodism in this busy modern town? Its history begins here in the year 1820, services being then commenced in a house occupied by a Mr. William Benn. Soon the rapidly growing society migrated to the barn of Farmer Robinson. In 1821 it is recorded that the Rev. William Clowes  visited Morley to open the first chapel. The infant Society, however, suffered from a great controversy which arose in Leeds regarding the methods of a prominent female revivalist, and the result was a split which led to the sale of the chapel, and the suspension of the services for some four years. In 1830 a new start was made, and from that time onward with steady success the good work has continued. On September 25th, 1835, the first Ebenezer Chapel, standing at the end of the Hunger Hill, and opposite to which its handsome successor has been built, was opened by Rev. Hugh Bourne. The story of subsequent developments cannot here be told in detail. Suffice it to say that at present four good chapels in the borough and two in adjoining localities, valued at over £13,000, form the present Morley Circuit.

At first the Societies were part of the great Leeds Circuit, and subsequently of Leeds II. In 1879, Morley was made the head of a new circuit with Rev. Jonathan Goldthorpe as its first minister. It is interesting to note that at a great meeting and re-union of old scholars recently held, Mr. Goldthorpe was the special preacher and speaker to the manifest delight of many old friends.

The history of this station has been one of steady development, and the future holds promise of still growing power. It is a circuit with a definite head, and much of its past prosperity has been the result of wise statesmanship, and consecrated service given by men and women, who have counted it all joy to help on the good cause and kingdom of their Redeemer and Lord. Ebenezer Church has been fortunate in having among its officials, men who have won position and influence in the business and civic life of their native town. The first Mayor of Morley (Councillor Joseph Schofield) was a Primitive Methodist and three of his successors have worthily filled that important office. The present Mayor (Councillor John Stockdale) is Circuit Steward, School Superintendent, Class Leader, and is now in the third year of his, Mayorality. His immediate predecessor, who held the position for a similar period, is an adherent, and with his family a worshipper at our Ebenezer Church. Ex-Mayor Ald. B. B. Barker, J.P., is son of one of those sainted women whose influence and service will never be forgotten. Mrs. James Barker is a name ever fragrant in the annals of Morley Primitive Methodism.

One of the interesting facts, and surely one of the most hopeful auguries for the future, lies in the hereditary interest of our Primitive Methodist families at Ebenezer. These are the Stockdales – the late Councillor S. Stockdale, father of the present Mayor, and himself also at one time holder of that office – Crowthers, Scotts, Birds, Schofields, Gotts, and a host of other names. What men they were! Joseph Gott, forceful, devoted, intelligent, a very giant in organising ability and resource! But it is invidious to mention names, and the catalogue is too long.

Brunswick, the second place in the circuit, has claims to distinction all its own. Smaller in size, bulking less largely in the public eye, it has accomplished a useful and effective work among young people. Of its leaders Fred Gee, the Assistant Circuit Steward, is a Primitive Methodist of the third generation. It is with pride he remembers how his grandfather accompanied the first pioneers of Primitive Methodism to Leeds, and becoming a convert, gave himself whole-heartedly to the work of helping on the good cause of Christ. This Society is taking a new lease of life, and plans for improvement and progress are being matured which promise a future of even greater usefulness.

Within the borough Bruntcliffe and Birks Societies stand at opposite sides of the town. The former in the midst of a community largely composed of miners, has suffered severely through repeated damage caused to the chapel by mining operations. This brave society is tackling its difficulties with splendid energy and increasing success. The name of Tolson is here one to conjure with, whilst Aspin, Huntingdon and Castle represent families of proved devotion.

Birks is the youngest of the six societies in the circuit. It possesses a model sanctuary and is served with zeal and enthusiasm by a fine band of young people, who acknowledge in Miss Jones a leader to the manner born. What fine old veterans are our friends Messrs. Jones and Hornsby! The war has seriously affected the young manhood of this church, but they are returning, and others with them. We thank God for their presence. We take courage and press on.

Tingley and East Ardsley are the two Societies outside the borough, and each is full of life and promise. Tingley is one of the oldest Societies in the Leeds District. Whether it grew out of the great Camp Meeting held on the Common when Mr. Clowes preached there we cannot say. For long years it has struggled against various difficulties, but now a fine band of young people are carrying the work forward, under the guidance of the ministers and their veteran leader, E. Hughes.

At East Ardsley in a growing community of miners and railway workers, there offers a great opportunity for splendid advance. The last four years have witnessed a development and consolidation of the work which furnishes ground for confident hopefulness. Premises which are scarcely adequate to the present needs, are used Sunday by Sunday to their full capacity. A Society of earnest men and women, composed in almost ideal proportions of old, young, and younger elements, with a strong backing of men in mid life, gives promise of a great church in future days, if wisely and generously inspired.

“And what shall I more say!” There is much that might be added; many worthy names that might be mentioned. But are they not all written in the book of life? Of the ministers who have served, affectionate memories are cherished, and no “special” is more welcome than they. Rev. E. Vaughan, who has served for four years as second minister, becomes Superintendent on completion of his fifth year in 1920, and under his guidance we pray that the best is yet to be.

The importance and influence of circuits such as these cannot be exaggerated. Here we are in the midst of throbbing populations, the very best type of industrial workers. We may well be proud of the influence of our Church in Morley and neighbourhood. We give thanks to God for this success.