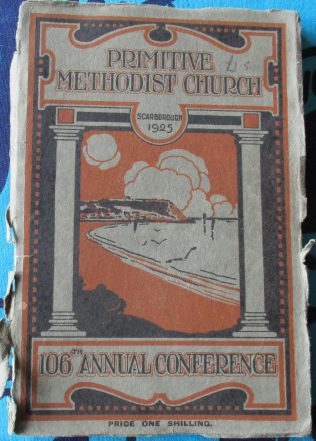 At a quarterly meeting of the Hull circuit in 1820, William Clowes was appointed to mission Scarborough.  He arrived here on Saturday January 27th  1821, preaching the same evening in the house of Francis Hunter.  The next day he spoke twice in Mr Lamb’s schoolroom and “once abroad to a large gathering whose conduct was decorous and where several were saved,” so says an old chronicle.  In this fashion did Primitive Methodism take root in this old town.  The soil was congenial as the history of the century testifies.

Clowes gave alternate Sundays to Scarborough for some time.  The preaching room at 4, Globe Street was too small for the thronging crowds.  The open air services by the harbour were attended, Clowes says. by “a prodigious mass of hearers, more than could hear me.”  Soon 100 members were reported and the work still progressed.  Nathaniel West, Sampson Turner, and John Abbey are associated with these early days.

The first chapel was built on the site of a Franciscan “Church of the Holy Sepulchre” dating back to the 13th century.

The tradition has it that this hallowed spot was “God’s gate of heaven” is not in vain, for such it has been to countless hosts of worshippers for seven centuries.

The adjacent villages were missioned with great success.  A schoolroom was added to the chapel and in 1840 a larger building superseded the first.  Clowes opened and dedicated the new building, others assisting were Flesher, Sanderson, Evans and Jeffries.

Meanwhile an unfortunate division had occurred in 1835 over the presentation of the doctrine of the Trinity.  Some of the most prominent men seceded and the calling in of a loan led to the closing of the chapel for a short time.

In February 1864 additional ground was purchased and a still larger chapel projected.  The second chapel was demolished and a third, the present St. Sepulchre Street, was built.  It is a building of which we may be proud.  Seating 1,200 people, it is so perfectly proportioned that the sense of mere “bigness” is lost in that of harmony and symmetry.  Its unofficial designation used to be the “Fishermen’s chapel” and it has been a centre of light and leading in the east end of the town all through the years.

“Jubilee” – the Conference church of 1935 was built in 1861, necessitated by the great increase of the members and the rapid  growth of the town.  Here in the very centre of the life of the community is another building of which we may be proud, housing a live church, whose past is a romance and future full of promise.

Next in order of date is the cause at St John’s Road, Falsgrave, where we have a splendid suite of premises in a populous suburb of the town.  The present church was built in 1879.  The earlier on adjoining is now used by the Sunday school.

Gladstone Road is a less pretentious building erected in 1881, intended first as a Sunday school.  It has always been the spiritual home of a devoted and fervent people and maintains P.M. traditions right worthily.

Seamer Road  cause is a growing locality on the main road of traffic into the town.  The present church, of dignified and pleasing appearance, dates from 1903, superseding a mission room built in 1882.

There are nine villages attached to the two circuits, and many of them have good, healthy churches.

The present Conference is the fourth held in Scarborough.  One has heard some of our veterans recalling with gusto the great doings at all three previous ones.

The first was in 1877. Thomas Smith was President and John Atkinson, Secretary.  The second was in 1887, only ten years interval, about half the usual term; perhaps Scarborough’s attractions and her spiritual atmosphere prevailed to win her special consideration

Thos Whitehead was president and George Seaman, Secretary.  The Conference of 1905. honoured itself by calling the venerable Geo. E. Butt to the chair, with E.C. Rawlings as vice-president and W.A. French as secretary.

It was the height of the “Passive Resistance” movement and during Conference a group of local “Resisters” was brought before the justices.

Contrary to all legal usages, they were “defended” by Arthur T Guttery, whose statement of the case for non-payment created a great stir in the town.

We are praying that these great seasons of other days may be eclipse by the stimulus given to our churches by the coming of the Conference of 1925.