Description by Thomas Campey, taken from the Handbook of the Annual Primitive Methodist Conference held in Sheffield in 1901 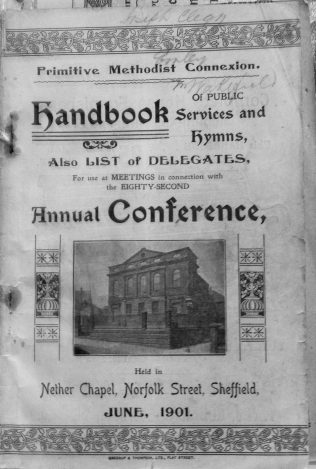 TO THE DELEGATES AND REPRESENTATIVES

For the fifth time the Annual Conference is to be held in Sheffield and on behalf of our churches we extend to you a cordial welcome to our city and to the hospitality of our homes.  We trust that your temporary sojourn amongst us will be a source of social and spiritual  enjoyment and profit, to yourselves and to the families who will have the honour and pleasure of your company.

You visit a city of which the citizens are justly proud.  It has a history, industrial, commercial, municipal, political and religious, dating back through several  centuries and its enterprise and progress, especially through the past century , have placed it in a prominent and influential position and made it a powerful factor in the public life of the country and the world.  In 1801 the population, including Ecclesall, Brightside, Attercliffe and Upper and Nether Hallam numbered only 45,755, but it has now reached upwards of 400,000, with a proportionate advancement in all other respects.

Like all great centres of population the city has its sins and its sorrows; but it also possesses numerous and vigorous elements making for righteousness and for a purer, nobler, and happier social and public life.  Its churches, Episcopalian and Nonconformist, are numerous and on the whole vigorously evangelistic.  Its Temperance and other social agencies are alert and progressive.  The various organisations for promoting intercourse and co-operation amongst the Free Churches have fostered a spirit of cordial Christian brotherhood, which has frequently expressed itself in effective action in the interests of morality and religion.  The city is exceptionally rich in charitable and philanthropic institutions.  Education, elementary and advanced, has been generously promoted, and its numerous schools and colleges are efficiently staffed, equipped and managed.  In its wise and sympathetic oversight of its aged and respectable poor the city is unique and by its system of Cottage Homes if has initiated a movement which has relieved the pain and humiliation of involuntary pauperism and set an example which is likely to be imitate in other places.

The public buildings of the city are numerous and imposing.  The new Municipal Building, commenced in 1891, completed in 1896 at a cost of £180,000, and officially opened by her late Majesty; Queen Victoria in 1897, is a fine structure, centrally situated, the massive splendour of which you will have an opportunity to see and admire on the occasion of the Public Reception given to you by the Lord Mayor on the evening previous to the opening of the Conference, June11th.

According to your personal tastes, notwithstanding the pressure of Conference business, you may find objects of interest and pleasure amidst the busy hum of the city’s varied industries; or from its breezy heights discover, perhaps contrary to first impressions, that it is beautiful for situation.  Its parks, museums libraries, and picture galleries will be open to you: and in the immediate neighbourhood, Chatsworth, Haddon, Hardwick, Wentworth, and Wharncliffe and the beautiful district of the Dukeries are situated, for reaching which abundant facilities are provided.

An excellent electric tram service is provided by the Corporation, by means of which nearly all parts of the city can be conveniently reached at a uniform charge of one penny between centre and termini and intermediate stages for half that sum.

Primitive Methodism was introduced into Sheffield by the Rev.  Jeremiah Gilbert, who was sent by the Nottingham Circuit in June 1819 and who opened his mission with such success that in two days a Society of 40 members formed, which during the nine months following had grown so rapidly that in March 1820 it was made the head of a new circuit.  After fifteen years of unsettled and migratory experiences Bethel Chapel was built in Cambridge Street, then called Coal Pit Lane, in 1835, at a cost of £4,460.  This was a daring venture and for some time the little church bravely struggled against formidable difficulties.  These were however eventually overcome and under the ministry of the Rev. J Verity and his successors a season of abounding prosperity was experienced and Bethel became a centre of spiritual activity and power and has become the joyful and honoured mother of many churches.

In 1856 the second circuit was formed with Stanley Street at its head and the Rev W Cutts superintendent , which has been followed at intervals by Petre Street, Hoyle Street, John Street, Attercliffe, Langsett Road, Ann’s Road  and Abbeydale Circuits.  In these nine circuits there is a total membership of 3,363, with 45 chapels which have cost £78,099.  In addition to these city circuits Rotherham, Rawmarsh, Doncaster, Chesterfield,  Mexborough, Bradwell, Barnsley and other Circuits have been separated so that the area of the first circuit is now covered by 30 circuits, with a combined membership of about 10,000 and chapels which are valued at over £200,000.

This brief review of the progress of our churches in the city and surrounding district during the past 80 years suggests the question “What has God wrought?”

The Committees are making all possible arrangements  for your comfort; for the convenience of the Conference and the despatch of its business; and for the effectiveness of the religious services.

We give you a hearty greeting, and hope that the conference  of 1901 will leave only th e happiest memories with all who shall take part therein.

On behalf of the Committee,