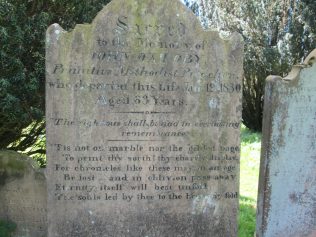 Having a few hours spare in the East Yorkshire Wolds last week, and armed with a list of pre-1914 chapels and a 1967 Ordnance Survey map of the area, I decided to visit as many Primitive Methodist chapels as were within reasonable driving distance. I was particularly interested in WARTER, having recently read George Shaw’s biography of John Oxtoby and Henry Woodcock’s Piety among the Peasantry. I was especially looking for chapels that are no longer used for Methodist worship, to preserve an image of them before the memory of them is lost. Village by village through my list, I discovered that few are still standing, most having been entirely demolished. Warter chapel was (according to the directory) already demolished by 1892.

What I did find in the church graveyard at Warter was John Oxtoby’s tombstone, with the words:

“The righteous shall be had in everlasting remembrance”

’Tis not on marble, nor the gilded page,
To print thy worth! thy charity display.
For chronicles like these may in an age
Be lost – and in oblivion pass away.
Eternity itself will best unfold
The souls led by thee to the heavenly fold.