a Quarterly Review and Journal of Theological Literature 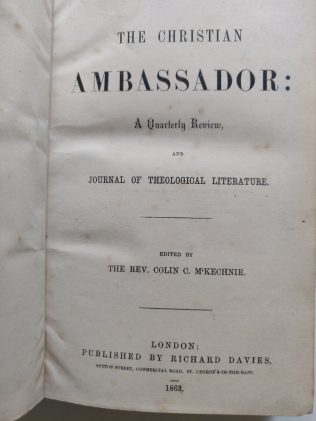 This influential quarterly magazine started around 1854 under the editorship of Rev. Colin C McKechnie and ran continuously until 1878 when it became the Primitive Methodist Quarterly Review and produced as part of his role as the Connexional Editor. The Englesea Brook library has 7 bound volumes covering issues 1-10 (1863-72) and 13-16 (1875-78).

Colin McKechnie had a significant influence over the intellectual culture of the Primitive Methodists in the late 19th century.  He, along with his Superintendent at South Shields, Thomas Southron, inaugurated a Preachers Association for the Sunderland District which did much to stimulate reading and study among the ministers and lay people. To these were given papers entitled Counsels to Young Ministers (by TS) and Christian Ministers and Politics (by CCM)  A more learned ministry needed material and resources to help this self-improvement alongside the more formal theological training started in the 1860s. He was associated with the founding of the ‘Christian Ambassador and Quarterly Review’ and edited it from 1855 to 1896. He was Connexional Editor during the period 1876-1887 and did much to revolutionise the connexional magazines, lifting them to a higher literary level.

What did the volumes contain which were not to be found in the ongoing Primitive Methodist Magazine? There were more scholarly articles of greater length covering a variety of topics relating to bible and theology, Christian history, preaching, missions and contemporary issues in society. Here is a snapshot of what is contained:

In view of the contemporary impact of BLACK LIVES MATTER, it is important to note a critical article in the 1877 volume attacking American attitudes to “the Negro”, denouncing so called Christian attitudes towards people of colour and defending the claim of black people to full rights in society. Almost 250 years later parts of the USA are still coming to terms with the inherent racism within that land, some of whose effects are still being experienced in our own.