You are here: HomenextTopicsnextChildrennextChildren who diednextAnn Sadler, of Ruddington, Notts 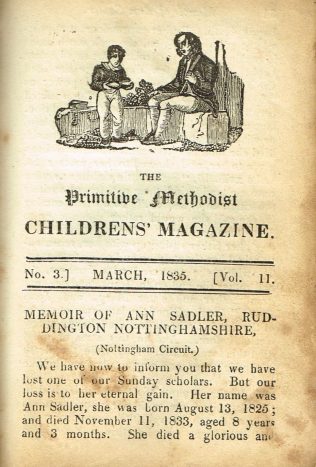 Ann Sadler was born on 13 August 1825, and died 11 November 1833, aged 8 years and 3 months. ‘She died a glorious and happy death.’  She loved reading hymns, especially the Small Primitive Methodist Hymnbook.  ‘She suffered greatly from an inflammation of the windpipe. But was never heard to murmur or complain, or wish to get better. A few days before she died she took her testament which had been given to her, and showed to her mother St Luke 8.16, “Suffer little children to come unto me, and forbid them not, for of such is the kingdom of heaven.’

‘The night before she died, her father sitting up with her, repeatedly asked her about dying and going to heaven. To which she answered with firmness, “I had rather die and go to Jesus, and see my grandmother and sister Mary, and John Blood.”  Brother Blood, the late superintendent of the Sunday school had died happy a few weeks before.’

Ann was no stranger to death. She had seen her little sister ‘cold and motionless… She had heard the cold earth fall upon the coffin, and had seen the tears of her afflicted parents…’

This touching memoir was written by ‘A Sunday School Teacher’ and ‘Approved by the quarter day board of Nottingham circuit.’