You are here: HomenextTopicsnextEducationnextColleges and SchoolsnextLivingstone College - Days of Change 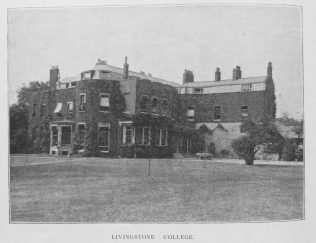 Transcription of article published in the Primitive Methodist Magazine by A. Mortimer M.P.S.

THE house in Bow which was taken in January, 1894, proved to be much too small, and during the second session new premises had to be taken, for the number of students had increased by fifty per cent. After much searching a suitable position was found in Hamfrith Road, Stratford, where two houses side by side, were obtained, which provided accommodation for twelve resident students.

The formal opening of these premises took place in November, 1895, speeches being given by Captain (now Sir Frederick) Lugard and by the Rev. Horace Waller, a former friend of Dr. Livingstone. Both these gentlemen spoke of the long felt want, which the College filled, and were united in saying that the idea was one which Dr. Livingstone himself would have heartily supported had he been alive, and they considered that the institution was worthy of bearing his great name.

Until the session 1896-7 things went quietly when, again, numbers greatly increased, and it was during this session that Dr. Harford paid a visit to West Africa to encourage his old missionary friends on the Niger. During the absence of the Principal the duties attached to his position were fulfilled by Mr. McAdam Eccles, assisted by Dr. J. Howard Cook. The number of students fluctuated as the years went by, gradually getting larger, until, at last, premises were again outgrown, and, in 1900, another removal had to be made to the present commodious home, at Leyton.

This fine building stands in its own beautiful and spacious grounds near to Epping Forest, and was formerly the mansion of the late Mr. J. Gurney Barclay. It is a magnificent old house, eminently suited for its present purpose. The surroundings are both healthy and beautiful, and, thanks to the L.C.C. tramway system and a good train service, the College is within easy reach of all the centres where practical work is obtained by the students.

Thus far have we followed, on broad lines, the history of Livingstone College. We see how it sprang into existence to supply a long-felt want. It has filled a corner in the great work of winning the world for Christ, and it has filled it well. No other similar college exists in any English speaking country; no other serious or satisfactory attempt is being made to do a similar work. Every year large numbers of missionaries go out totally unprepared for emergencies connected with illness or accident. When we remember the small number of men who have passed through the College during the eighteen years of its existence—only some four hundred-—it becomes painfully evident that but a small proportion of British missionaries have received the necessary training.

Missionaries are, as a class, heroic to a degree, taking their lives in their hands when they go to preach the gospel in foreign lands. Sometimes they come home with shattered health and ruined constitutions, sometimes they die at their posts. Kingsley, in one of his books, asks, “What can a man do more, than die for his countrymen?” The reply is, “Why, live for them!”

Livingstone College was established to teach the missionary to live for his fellows. Is there a nobler purpose in life than living day by day for Christ and the world? Surely in the face of such facts can any ask, “Is it necessary?” Of course it is necessary. Let us again see the threefold aim of the College. To train men who are, or intend to become, foreign missionaries in the elements of medicine, surgery and hygiene, so that (1) They may know how to avoid the risks to health which are met with in foreign lands; (2) They may treat common diseases and injuries of themselves, their families or fellow missionaries when far from medical aid; (3) That they may render simple aid to the ignorant natives amongst whom they may be working.

The course is really a first-aid course. In this country the city missioner, the policeman and, indeed, everyone ought to be able to render first-aid to the injured. The St. John’s Ambulance Association has done a great work in the land. Their course is advantageous to the missionary, but it is insufficient. In the wild parts of Central Africa, where streets full of heavy traffic, electric trams, trains and buses are unknown, such accidents as occur in England are also unknown. The accidents that demand prompt attention are of a different kind. They are the sudden attacks of disease which will take away life almost as rapidly as a colliery explosion. To do something to combat these rapid tropical diseases is the kind of first-aid in which the missionary must be skilled.

Sent out, as he so often is, without medical training, what a position he finds himself in! Around him the suffering and dying, and he condemned to stand helpless for want of a little elementary knowledge, meanwhile running the risk of contracting infection himself.

The natives, too, instinctively, think of the missionary as the “medicine man.”

Dr. Livingstone, himself, is the responsible person for the creation of that opinion as the result of his own example. Christianity and the healing art must go hand in hand if the world has to be won for Christ. Every missionary organization ought therefore to insist upon this very necessary training for its recruits. Every contributor and helper in the missionary enterprise should insist that his money should only be used to send out properly equipped men. Our own missionary committee are very good in this respect. The only cause for complaint is that our men are rarely able to take the full nine months’ course. This should be remedied somehow.

What a debt of gratitude the missionary cause owes to this great enterprise and to its founder and genius, Dr. C. F. Harford. He and the Vice-Principal, Dr. G. Basil Price, spare neither time nor energy in order that the men may get the best possible training for their purpose. The list of tutors contains many illustrious names, and the list of students, too, is full of great names in the missionary cause. The Roll of Honour contains the names of men – natives of countries as far apart as Africa and America, Iceland and India, China and France, Germany and Russia, and of almost every denomination and sect. Amongst the names on that list are those of many Primitive Methodists whose work will live in hearts made holy and in lives redeemed.