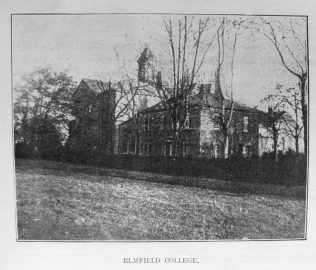 THERE could be no sort of doubt that the Jubilee School, York, was the best institution of its kind in the kingdom. Was it not under the governorship of that scholarly and saintly man, the Rev. John Petty? Was not that the most ample guarantee of its excellence? As a Primitive Methodist school it was not like the schools of “the godless church people,” and henceforth the sons of our Connexion would no longer need to be educated in places alien to the faith of their fathers. And then there were the religious influences of the school to be considered. The supreme anxiety of my parents was my salvation, and the glowing accounts of the school in this regard had great weight with them. These accounts did not appear in any Connexional paper, for we hadn’t one, but in the “Large Magazine.” My father did not consider the magazine perfect, which surprised me; for although I could not read certain portions of it I reverenced it greatly. And now when I think of it I believe it was on account of the considerable areas of the magazine which I could not read because of their weight and dryness that my father one night had a heated discussion with the superintendent minister, whose name wild horses would not drag out of me. My father’s criticisms were resented, and yet looking back I am convinced that the layman’s instinct was sound.

Well, as I was saying, the “Large Magazine” gave a glowing account of the new school especially on its religious side, and so it was proposed that I, as the youngest of the family – very much the youngest indeed, for I was “one born out of due time” – should be sent to York School, the village school having done about all it could for me. After a year’s consideration it was finally decided that I should go, and the necessary arrangements were made. It was a momentous decision for me. I have sometimes wondered what would have been the course of my life if the decision had been otherwise. Within certain limits I may safely say I am what I am by the grace of God and Elmfield College.

It was on a fine Spring morning that with tearful eyes my mother kissed me good-bye and sent me forth for the first time into the great world. She did it reluctantly, and the sacrifice of parting with her youngest was only made under a sense of duty.. My father accompanied me on the great journey, and I remember well the long drive of ten miles to the nearest railway station. There were few signs of Spring to be seen in that Northern region and the lush grass in front of the school gave me quite a surprise. To one who had seldom been in a train the journey was full of interest, and I still recall the thrill with which I caught sight of the minster as we neared the old city. It became a very familiar sight to me in the after years, but the amazement with which I beheld it for the first time never quite died away.

How many old Elmfieldians recall the last stage of the journey, the drive in a cab from the station to the school. Last things and first things leave their impress on the mind. To my boyish eyes the school seemed an imposing pile. The governor received us with the dignified courtesy which was one of his characteristics, and in due course we were shown over the school. The rooms and corridors seemed vast and awe-inspiring places; and compared with the village school no doubt they were vast.

When I returned home at the end of the term I was amazed to find how small everything was. On that first day I made acquaintance with a boy whose home was only some seven miles from my own. Arrangements were made for us to share the same bed, the school being too full at the time to allow every boy a separate bed. Next morning my father took his departure, and for the first time in my life I was alone amongst strangers.