You are here: HomenextTopicsnextEducationnextColleges and Schoolsnext'Letters Home' from Hartley College, 1911 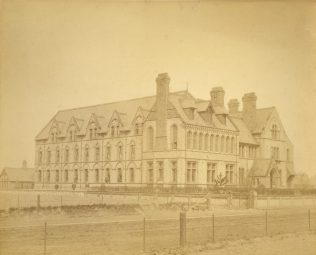 At this time, students spent three years at Hartley College, in training for the Primitive Methodist ministry

“The college is an immense place. There are studies and bedrooms for 105 students in addition to lecture halls, common room, library and other rooms. Both my study and bedroom are on the top storey, but they are in different wings. To get from one to the other I have to go down to the basement and straightway commence to climb again, so you see I shall not be short of exercise. Both my rooms are pleasantly situated. The study overlooks a farmyard and the college gardens, and when I get my pictures, and a pair of curtains hung and two small tablecloths, it will look very cosy.”

He goes on to speak about his fellow students, and describes some as being “splendid fellows” while others are “arrant asses” who hold nothing sacred and are never serious. Dryden writes that he went through several initiation ceremonies – he feels there is nothing in these to do a man harm, and he can imagine some of them doing some men a great deal of good.

Dryden joined the Social Reading Circle. They were divided into groups of six with a chairman, and during this term Dryden’s group had to read over and discuss Ramsay MacDonald’s book on socialism. Dryden has to prepare a sermon for the governor on the following text: “I am the Good Shepherd; He giveth his life for the sheep.”

Dryden seems to have spent a lot of his spare time in Ancoats where an open-air mission was held. To use Dryden’s words: “The Ancoats Mission has been a great success during the last two years. Before that the Conference had decided to close it, but as a last resort the students were asked to take charge. Now the church can afford a minister and a hired local preacher. The class meetings are crowded: they have a school full of ragged children, some of whom are taken to the holiday home near Bury every year. What a district is Ancoats. On Saturday night we were surrounded by men and women of absolutely the lower type. Some were inclined to scoff and interrupt, but it was pathetic to see some of them join in the singing of the hymns, especially Rock of Ages. There’s tremendous work to be done in the cities and it needs a special type of man to do it.” The secretary of the Ancoats Mission asked Dryden to undertake visiting duties in the Ancoats flats. Dryden agreed to visit Pollard Street every three weeks. His duties included gaining admission to the homes where possible to read and pray, to visit the sick and to invite people to the services. Dryden felt it was important to be doing something besides studying.

Dryden describes going to the Wood Street Mission, which was supported by voluntary subscriptions known as the “Cinderella Fund.” This mission had a camp at St. Annes during the summer months and each week 120 children would be sent there. During the winter months over 400 men would be sheltered each night at the mission.

On another visit to Ancoats Dryden was on the lookout for cases of extreme need to report to the secretary of the Ancoats relief committee. It seemed pointless to invite people to services when many of the people had not the clothes to go in. One young woman told them that as a result of a whole week’s work she could earn just four shillings.

Dryden and four of his fellow students met each evening before retiring for a time of scripture reading and prayer, which they all found very helpful. He seems to have thrown himself into all aspects of college life, and enjoyed physical activities, becoming a recognised linesman in the college football matches.

These extracts are from ‘Letters Home’, pages 63-95 in ‘The Household Annual’, 1911, compiled by the Phillipson family. These fascinating letters can be seen in full at Englesea Brook Museum.

Other students Dryden talks about are Shaw, the son of a minister who died eight years ago; Featherstone of Craw Creek; C H Marsh; Parbrook; Horner who belongs to the ILP; Leggatt; Ogden; Spedding; Gow; Buckley, whose ‘heart is in Africa’; Hardy and King. He also mentions Dr John Clifford; Mr Wardle; Professor Peake; Mr Price, a returned missionary.

Dryden was the son of another Primitive Methodist Minister, John Phillipson. His brother James Emerson Phillipson had also been to Hartley College, and was now in the ministry. You can find other extracts from the Phillipson family’s ‘Household Annuals’ for 1911, 1915, 1916 and 1918, on this website.