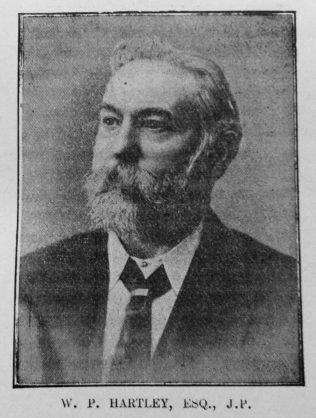 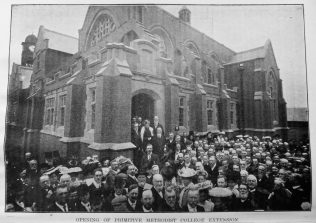 Transcription of Article in the Primitive Methodist Magazine by H.Y. (Henry Yooll)

THE outstanding feature of the recent Conference was the opening of the College extension due to the continued munificence of Mr. W.P. Hartley, J.P. It will enable students to take a three years’ instead of a two years’ course of training. This advantage will have a cumulative effect in the equipment of the students and will be highly appreciated. It may be interesting to know that the first part of the College buildings was erected in 1879, and comprised 60 rooms accommodating 30 students, together with library, lecture hall, dining hall, and Principal’s House. In 1887 the building was extended, 60 more rooms being added for an additional 30 students, together with principals’ and tutors’ rooms, an additional lecture hall, and additions to the Principal’s house. A leading feature of this extension was the clock tower and clock. The present new extension is attached to the older portion of the College by means of a short corridor joining up to the clock tower. lt comprises 107 studies, 5 sick rooms, 4 tutors’ rooms, a new library – the old one being converted into a common room, a new dining hall, with necessary enlargement of the kitchens, large lecture hall, and the College chapel, which is a specially fine architectural structure, and possesses sitting accommodation for 160 persons.

The buildings are carried out in perpendicular Gothic. The 107 studies are all grouped round a spacious quadrangle; each study is 11 feet by 9 feet, and suitably furnished and decorated. The furnishing of the chapel is all in oak, and the organ is of the finest tone and workmanship. The electric lighting arrangements for the whole of the building are complete, and the heating system leaves nothing to be desired.

The grounds and buildings cover an area of 5½ acres, there are in all 308 rooms. Taken in its complete form the College is generally regarded as probably the largest and finest Nonconformist structure of the kind in the country, and is a splendid monument to the princely and statesman-like benevolence of its remarkable donor.

The opening ceremony took place in presence of a large and deeply interested crowd. Rev. Thomas Mitchell announced a hymn, after which the Rev. H. Yooll offered prayer.

Mr. Stephen Hilton, the Vice-President, then gave an appropriate address, referring in eulogistic terms to the liberality of Mr. Hartley, and then presented a gold key to Mrs. Hartley, who straightway opened the door.

For the dedicatory service, ticket-holders crowded into the building, and every inch of available space was occupied. Among those present were the Lord Mayor of Manchester, the Rev. G. Parkin (President of the Conference), Vice-Chancellor Dale (Liverpool University), Professor Peake, the Rev. Dr. Adeney (Principal of the Lancashire Independent College), Rev. Dr. Fairbairn (Mansfield College, Oxford), Mr. Alderman S. Hilton (Vice-President of the Conference), and the Rev. William Johnson (Principal of the College).

The dedicatory service was then proceeded with, the Rev. E. Dalton announcing the first hymn and the Rev. Jas. Pickett offering prayer. Mr. W. Beckworth, J.P., of Leeds, then unveiled the tablet in the transept, remarking as he did so upon the great interest Mr. Hartley had taken in ministerial education, and that the building, which for the most part had been paid for by him, would be a worthy memorial in coming years.

The following are the terms of the inscription on the tablet:-
“This tablet was erected to commemorate the munificence of W.P. Hartley. J.P., of Southport, who for the glory of God, and moved by his profound sense of the value of ministerial education, built and presented completely furnished to the Primitive Methodist Church this chapel and the adjacent study-block; at the same time adding the new dining hall and library to the older block, the greater portion of which had been similarly erected and presented by him in 1897. Unveiled on the occasion of the opening of the later enlargement during the Conference at Manchester, June 18th, 1906.”

The Scripture reading was by Professor Peake, and the dedicatory sermon was preached by the Rev. Dr. Fairbairn.

Then followed an enthusiastic and memorable meeting in a huge marquee, which was crowded beyond its capacity. Rev. W. Johnson. F.L.S., Principal of the College, presided and gave an appropriate address. Rev. A.L. Humphries M.A., led in prayer, after which Revs. Jas. Travis and John Welford spoke timely and heart-stirring words. Mr. Hartley then formally presented the buildings to the Conference in one of his pithy speeches, remarking that the College buildings were for the use of Primitive Methodists, but he hoped that in the near future a more united Methodism might use them too. The President of the Conference then in fitting words accepted the handsome gift on behalf of the Connexion. The occasion, together with the great meeting in the Free Trade Hall, at which the array of academic robes worn by those who had come to honour us by their presence and kindly speech was almost bewildering, marked a new epoch in our history. Perhaps the most encouraging note in all the speeches of the day was that while due acknowledgment was paid to culture and its indispensable value to the ministry, special prominence was given to Evangelicalism and a wise and earnest insistence upon fervent spiritual Evangelism as the true hope of our Church and its warrant to the age in which Primitive Methodism has become a great and growing force.