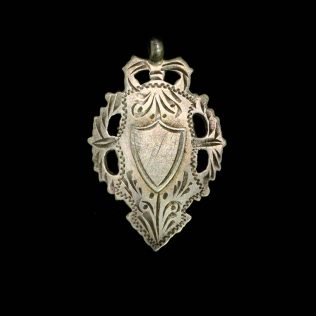 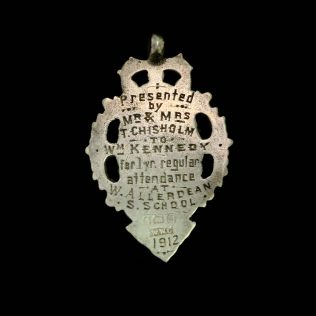 The pictured Watch Fob was found by David Ray whilst metal detecting in Northumberland. The inscription reads as follows

I have not been able to identify any information about the recipient of the watch fob; William Kennedy. It was common practice to reward attendance at Sunday School by appropriate gifts annually. The type of gift might suggest William was a mature student.
The Chisholm family had a long connection with the chapel. I found an obituary of a sister of Thomas Chisholm , Jane Young Chisholm, which provides some family background.
Thomas Chisholm was born in 1857 at Scremerston, Northumberland – he was a grocer (1881) and is described as a landowner in the 1911 census return – so was probably relatively successful in business. Family trees on Ancestry.com suggest he died in 1932 in Edinburgh – I have not been able to verify that independently.
Thomas married Isabella McLain (1856-1938) in the third quarter of 1891. The 1911 census return describes Isabella as an evangelist.
We would be interested to hear  any information about William Kennedy, the recipient of the fob.