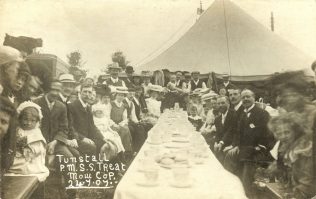 Between December 1840 and February 1841, Samuel Scriven collected evidence for a Report on the Employment of Children and Young Persons in the Staffordshire Potteries. One of those he interviewed was the Superintendent of Tunstall Sunday School.

‘I am the superintendent and secretary of the boys and girls Sunday-school; we have upon the books 400 boys and 380 girls; out of this number about 600 regularly attend; there are 35 male and 45 female teachers, and about 20 adult scholars. We are supported by public collections and contributions; no endowment. We have now no funds to meet our current expences, and are between £600 and £700 in debt upon the building, which stood us in £800; the interest is paid out of the general fund. The instruction is in scriptural reading, writing, spelling, and public lecturing and exercises; I think the children make great progress; we have increased greatly in late years. The absence of many now is the want of clothing; I think the parents are glad to send the children, but the depression of trade has prevented.’

This was the largest Sunday School in Tunstall, and it is interesting to compare it with the Wesleyan and Methodist New Connexion Sunday Schools.

‘This school has been established about 18 years. We are supported by voluntary contributions; no endowment. We have upon the books 86 girls and 114 boys; 25 male teachers, 11 females; we have no particular system of education; the instruction consists in scripture reading and writing; the teaching is gratuitous. On the week nights we give gratuitous instruction in grammar and geography; we always expect the children to attend the religious worship of the chapel; their times of attendance here at school are from a quarter before nine to half past ten, again from two to four in the afternoon; we commence and terminate the duties first by prayer and then by singing; I think the children make some progress, considering the limited time of instruction.’

‘I am the superintendent of the school for boys and girls; we have 700 on the books, but not more than 600 in usual attendance; the male teachers number 60, the female 40. We are supported by annual sermons, subscriptions and contributions; no endowment. We are about £1600 in debt; the interest is paid from our fund; if I could live to see the debt paid I should die happy. The children attend very well and improve by it; with all our efforts there is a vast deal of ignorance, because the parents do not co-operate with us; they send them very early to work. I am a manufacturer, raised from a labourer to a master.’