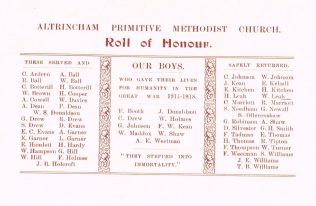 Altrincham Primitive Methodists valued the dedication of their sons, husbands and fathers in the war and produced the attached Memorial so that they should never be forgotten.

The Roll of Honour gave details of those who returned and of those who paid the ultimate price. In the words of the Memorial they are, with great affection and sadness, called “OUR BOYS WHO GAVE THEIR LIVES FOR HUMANITY IN THE GREAT WAR 1914-1918. THEY STEPPED INTO IMMORTALITY.”